It’s been a little while since I put a blog together, sorry for that.  But, I’ve been trying to focus on the tournament we had last week at the Mississippi River in LaCrosse Wis.

I had kind of an up and down tournament last week, and as you can imagine, I’m kind of up and down about it.  I got on a really good Flip bite in practice and I was really excited about the event.  I found them in main river current and I could crack them pretty good.

But, as tends to happen in tournament fishing – the conditions changed.  Instead of the water level being stable and the current being predictable; it fell and slowed down.  So, my Flip bite in the shallow cover slowed down and I had to scramble.

I scraped together 12-13 on day one, and was in a tie for 49th place with something like 17 guys.  Actually it was four others, but I knew I couldn’t let things continue like that; I needed to pick up the pace to climb higher in the points. 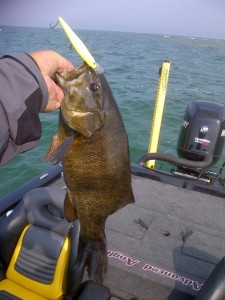 So, I went out on the river on Friday and picked up a frog and figured out a little something that put 15 pounds in the boat, and I finished the day n 13th place in the standings.  I was pumped going into Saturday, and then things changed again.  We had a little front come through and the fish didn’t eat the frog quite the same.  I got 11 keeper bites and only got four of them in the boat.  I ended up with a little over nine pounds and fell to 33rd in the tournament.

I ended up moving up three places in the AOY standings, which is a good thing.  but, when I was in 13th place, I had moved up to 20th place in the standings –  I liked that better.

Oh well, the positive thing is that I moved up, and with two tournaments left, I have two more chances to finish well and move up even more.  I’m looking forward to the Green Bay tournament and hopefully catching some mutant brown bass.

They’ve got some great smallmouth up here.  We’ll talk about that again after this week.  But, before I get out of here, I want to wish a Happy Birthday to my wife Kim.  She’s a great mom and she works really hard for all of us – Happy Birthday.  I also want to wish my good friend Byron Velvick a happy birthday as well.