I’m not sure there has ever been a more significant statement made in regards to an Angler of the Year race than was made yesterday at Lake Champlain. 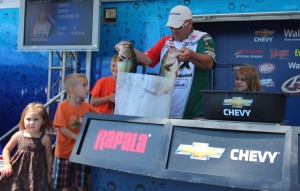 David Dudley, the FLW Tour pro from Lynchburg, Va., is the reigning FLW Tour Angler of the Year. After winning the title in 2011 for the second time in his FLW career, Dudley took control of the 2012 race with a 14th place finish at Kentucky Lake last month.

Not that the lead was a significant one. Heading into the final event of the 2012 FLW Tour season at Champlain, Dudley held a one point lead over Jim Moynagh, an FLW Tour pro from Carver, Minn. The 2012 race for the FLW Tour angler of the Year title couldn’t have been much closer than it was.

Dudley may have completely put his stamp on the 2012 title with one of the most impressive first day performances with pressure of an Angler of the Year title on the line. Dudley took the first round lead of the FLW Tour 2012 finale at Champlain with a limit of bass that tipped the scales at 24 pounds.

Moynagh managed to catch only a little more than 12 pounds and he finished the day in 103rd place. The third ranked angler in the standings; Jacob Powroznik, started the day eight points behind Dudley. Powroznik had as good an opening round as an AOY hopeful could want to have, as he tied for second place, but he was overshadowed by Dudley.

While much of the tournament talk suggested that the tournament would be won by making the nearly 80 mile run from Plattsburgh to the Ticonderoga area, Dudley went against the grain and went north. While many prognosticators would have called that a mistake, Dudley went about his day and put what quite possibly be the final nail in the coffin of his competitors for the 2012 FLW Tour Angler of the Year title.

There’s no telling how day two of the event might turn out, but for Dudley to make that kind of a start, under the pressure of a close Angler of the Year battle, may be one of the most clutch performances we have seen in modern bass fishing.

At this point, with Moynagh’s slip, along with Ron Shuffield’s 36th place performance, Cody Meyer’s 38th place start and even with Bryan Thrift; who was in fifth place in the AOY standings (48 points behind Dudley), finishing the day in 14th place, it looks as though the FLW Tour 2012 angler of the Year race will come down to a final battle between Dudley and Powroznik.

Of course, this is bass fishing and anything can happen, but with Dudley having not only the ability to close out his third AOY title, the killer instinct to make it happen; and now the confidence in an area that everyone said he should not have been sure of, we can’t see anyone else lifting that trophy. 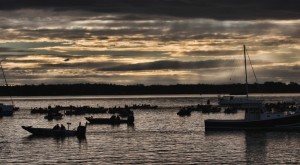 At any rate, today was perhaps the most decisive statement we’ve seen from an AOY leader in a long time. Dudley’s statement on Thursday could be the sunset of his competitors’ AOY hopes and the dawning of his third reign as the FLW Tour Angler of the Year.