Once bass have finished spawning, have taken the time to begin their recovery and have made their transition to offshore structure, they have one primary objective; feeding.  The need to recover their body mass and strength after the spawn is a biological need that anglers can exploit. 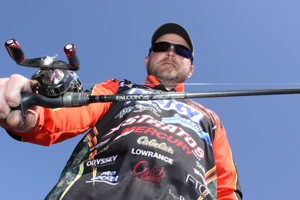 One of the best at finding and catching bass in this period is Bassmaster Elite Series pro Mike McClelland of Bella Vista, Ark.  The six-time B.A.S.S. winner is usually the first name fans and pundits refer to when the topic of offshore and football jig intersect.

McClelland’s name has become synonymous with football jig because his 2006 Elite Series win on Oklahoma’s Grand Lake and his 2007 Elite Series victory on Clarks Hill Reservoir in Georgia both came on his venerable Jewel Football Jig and Zoom trailer.  Both of the victories were claimed during the postspawn period.  In fact, his approach is so effective that his Grand Lake win remains the largest margin of victory in the Elite Series at more than 15 pounds.

“I really like being able to hunt fish when they stack up in groups from the postspawn through the summer,” said McClelland.  “Being able to position my boat offshore and work a school of fish thoroughly is what I’m best at, and my Jewel Football Jig and Zoom trailers give me the best chance at producing quality bites.”

McClelland has built his career on his ability to locate and catch bass offshore.  He has a system for finding and catching them; it is built on efficiency and patience. 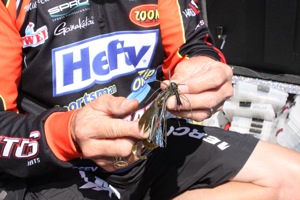 Jigs, Trailers and Colors
McClelland carries an assortment of Jewel Jigs, and depending on the conditions; he chooses his weapons.   In water to five feet deep, he chooses a 3/8-ounce model, unless there is wind, then he goes with the 1/2-ounce version.  If the depth is from five to twelve feet deep, the 1/2 to 5/8-ounce sizes are best.  He uses 5/8 to 3/4-ounce sizes in water to 18 feet deep, then uses a one-ounce jig in water 20 feet and deeper; unless the water is really clear, then he will downsize his line and go with the 3/4-ounce.

He prefers using soft plastic trailers that contrast his jigs slightly.  He favors watermelons and translucent greens in clearer water, then turns to green pumpkin based colors in darker water.  He prefers trailers that have some action in the postspawn, so he likes to put a modified Zoom Brush Hog on the larger sizes, but prefers the Baby Brush Hog on the lighter to mid weight jigs.  He also includes a Zoom Super Speed Craw when bass are suspended and reacting to jigs that are hopped or swum through the water column. 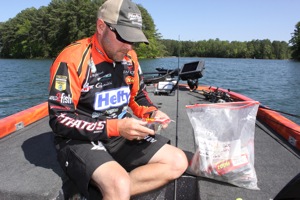 Jig Gear
McClelland worked with Falcon Rods to create a signature jig rod tailored for his fishing style.  The 7’4” heavy action Falcon Cara T7 McClelland rod paired with a Quantum Tour Edition or Smoke reel is key.  He uses a 6.3:1 retrieve if he is in water to 15 feet deep, then turns to the 7.0:1 Burner version in deeper water.  The reason; he said, is for hooksetting.  “I try to use the reel to load the rod before sweeping the rod,” he said.  “I don’t a hard, jarring hookset because it’s not necessary.  A sideways sweeping hookset like a Carolina Rig works better.”

He alternates his line by water clarity as well.  He will choose 16-pound-test Sunline FC Sniper or Shooter Fluorocarbon if the water is clear, but if there is any stain to the water; then he upsizes to 20-pound-test.  He did say that he is working with Sunline to produce a structure fishing Fluorocarbon that would cast distances and resist abrasion.

Locating Fish
McClelland starts his search in specific areas of the lake.  He is searching for specific types of structure that provide him the best chance at finding large schools of bass.  He said that structure fishing for him means sticking primarily to the main lake and large creek arms.  “I look for harder break lines that you’d find on turns in the river channel,” he said.  “Those areas typically have a steep drop off and because of the concentrated current levels, have rocks and soot systems that are more exposed.” 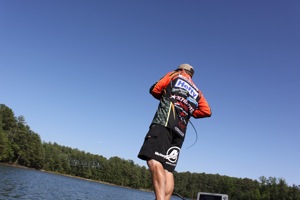 To locate areas that he would like to concentrate on, McClelland starts with studying maps, then turns to his Lowrance HDS units with mapping chips to fine tune his search.  Once he is on the water, he covers as much water in his Stratos 210 Elite as possible looking at his Sonar to locate the elements he wants to study.

After finding his isolated areas he turns to his Structure Scan to pinpoint the cover elements on the structure.  He also wants to figure out how the bass are positioning themselves in relation to his target.  “I need to find out if they’re on top of the break, at the bottom of it, or suspended,” he said.  “Once I get an idea of how they are positioned, I can decide how I want to position my boat and present the lure to them.”

Presentation
McClelland said that he always starts parallel to the structure.  He makes long casts and works the lure through the school.  His first objective when fishing the jig is to keep the lure on the bottom.  He achieves this by using a sweep / drag method to pull his lure slowly through the retrieve.  “I rarely hop my jig,” he said.  “I don’t get many bites from fish when the lure leaves the bottom unless they are suspended and chasing.  So, the jig has to stay on the bottom”

If he has made several casts parallel, and not received a response, he will then move his Stratos to retrieve the lure uphill or downhill.  He said he doesn’t have a real basis for when fish like either way, so he tries each until the fish tell him what they want. 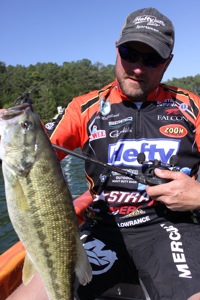 Keeping Organized
McClelland tries to keep himself organized for peak efficiency on the water.  To him, that means setting himself up to make quick moves when changing jigs or reloading trailers.  He stores his jigs in Plano boxes, but his replacement skirts are stored in Hefty One Zip quart size bags for easy access should he need to make a skirt change quickly.

He also likes to prepare trailers that are trimmed and scented if he knows he is going to be fishing a strong jig bite.  He uses the same quart size Hefty One Zip bags and trims the Brush Hogs shorter at the top, breaks the appendages free on one end and splits the flappers.  Once he has several that are ready to go, he squirts a few drops of Smelly Jelly in the bag as well.

He does use dye at times as well.  If he needs to place precision markings of chartreuse on the jig, then he uses a Zoom Marker.  But, he carries a supply of J.J.’s Magic chartreuse and orange dye and plays with the colorings to see if it makes a difference.

Final Tips
The first mistake the Elite Series pro said anglers make is to try and fish to fast with their jig.  “You really need to slow down and fish the jig methodically along the bottom,” he said.  “You want to scrape that jig across everything you can in order to make fish strike.  If the jig leaves the bottom; you’ll miss opportunities.”

He also suggested anglers dial back their hooksets.  “It’s really important to load the rod with the reel when you get a bite,” he said.  “The Jewel hooks are really sharp, and with their O’Shaughnessy hooks, once they’re in, they wedge against the mouth and don’t wiggle out.”