Dean Rojas has always been known for doing things his own way.  A gifted sight fisherman, Rojas used the technique to set the record for the heaviest one day catch on Lake Toho in 2001 with 45 pounds, 2 ounces.  He won the event with 108 pounds, 12 ounces.  He won the next event at Toledo Bend Reservoir the following month, again with sightfishing playing a role. 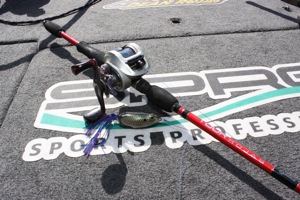 Rojas, who originally came from San Diego, Calif. could catch bass any way he needed to.   However, his love for shallow water continually guided him there.  When he moved to east Texas and began fishing on the waters there, he found plenty to focus his shallow water efforts on.

When Rojas and SPRO developed the Bronzeye Frog several years ago, a whole new window of opportunity opened for him.  The Lake Havasu, Ariz. pro found “Kermit” to his liking from the prespawn period through the fall.  Since it launched at ICAST in 2005, Rojas has made his mark many times with his floating amphibian.

Since his frog hit the market, Rojas has had several memorable finishes using the lure, and he has qualified for five of the last six Bassmaster Classics.  That’s not to say that the only lure he has thrown has been the frog, and in fact, his dedication to the bait has produced some difficult finishes.  However, America remembers big moments, and Rojas and his frog have produced several.

When it comes to fishing the frog, heavy cover is the norm, and while most of the other anglers in the Elite Series field might be throwing it; he thrives on producing the right bites when everyone else is doing the same thing.

“I believe in putting Kermit in places that others don’t,” he said.  “Many of my competitors are throwing frogs, and they might even be my frogs, so to be competitive I have to understand it better, and be able to do more with it.” 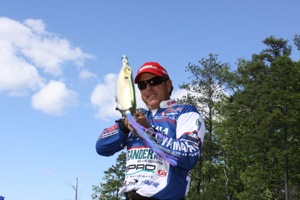 Frog Gear
He starts with tackle that helps him be ultra efficient with the Bronzeye Frog.  He worked with Quantum to produce a rod that Rojas desired for making quick, accurate casts, but still had enough backbone to set the hook effectively.  The result was his 7’ Tour Rojas TDRC706F.

He pairs his rod with a Quantum PT Tour Edition 7.0:1 burner reel, so that he can make more presentations.  “I get asked why I use the high speed reel for such a power presentation,” he remarked.  “I fight the fish with my rod mainly, and because the strike zone around cover is so small, I want to reel the bait in quickly and make the next presentation.”

He spools Sunline FX2 Froggin’ and Flippin’ Braid on his reel.  He usually uses the 60-pound-test size, and if he is around grass, he uses the Dark Green color, but turns to the Dark Green and Blue color if he is fishing open water around cover.  The two-color line helps camouflage itself between the cover and open water.

Choosing the Frog
Like most of the best anglers in the country, Rojas prefers to try to keep things simple, and while he carries nearly all of the more than 30 colors that SPRO manufactures in his signature bait; he lets the conditions dictate what he throws.

“In low light or overcast conditions, I choose blacks and browns,” he said.  “As the sun comes up, I tend to move towards whites and greens.  We also have specialty colors that mimic bluegill and crawdads, and those for specific regions of the country; we’ve tried to give everyone something they can feel comfortable with.” 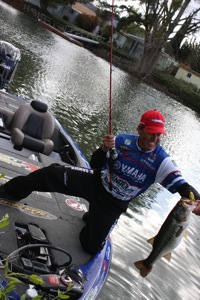 Like any other angler; he does have his favorites that he tends to start with.  “If I had one color that has become my go to, it would be Midnight Walker; the all black one with the bright red eyes,” he revealed.  “This is the color I turn to when I need a kicker bite to push me over the top; I’ve caught more big fish on that color, and while I know I’m not going to get a lot of bites on it, I’m usually going to get some really good ones.”

Where to Throw
In the postspawn period through the early summer, Rojas looks to catch big females that have begun their transition from the spawning area to the main lake.  However, as bass completely finish their spawning, he looks for solitary fish that set up shop in shallow cover; looking for larger meals they can ambush.

In either case, immediately after the spawn or into early summer, Rojas looks for deeper water banks leading into and out of spawning areas.  He focuses his efforts on secondary points with some cover on them.  His approach is to try and cover as much water as he can, looking for quality fish.

“I’m not a guy who likes to fill my livewell with small keepers that I have to cull out,” he said.  “With that in mind, I tend to get in the trees or around other shoreline cover and try to make five or six of the right fish bite.  It may take me most of the day, but I’m confident that I’m going to get the right bites with the frog.”

The Learning Curve
The four-time B.A.S.S. champion admitted that his love of frog fishing had caused him to stick with the program longer than he should have in some situations.  He revealed that he has matured with the approach however.  “I’ve learned when I should stick with it and when I need to put it down,” he said.  “It’s nothing that I can really put my finger on, but there comes a time during a day that I realize I need to put it away for a while.  It’s a gut feeling that I get when things aren’t going just right and I realize I might need to pick up something else; I’d just tell people to keep an open mind.” 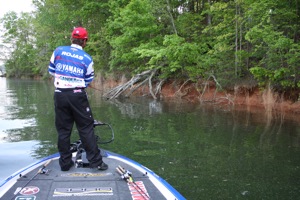 The final thing he related was to tell anglers to be willing to put the frog where other people don’t.  “I really make it a casting game on the water a lot of times,” he said.  “I’ll see how many different places I can put the lure.  I toss it over around under and through things trying to generate bites that other guys overlook.”

Finally, he said anglers should cover the water very thoroughly.  That doesn’t mean to work the lure all the way back to the boat, but it does mean to work the cover very effectively.  “If I’m throwing toward a laydown log, I’ll walk Kermit to the edge of the cover, then speed reel it back in and make another cast,” he said.  “If people challenge themselves to be aggressive with casting, and cover the water effectively, then they should start getting the right frog bites.”