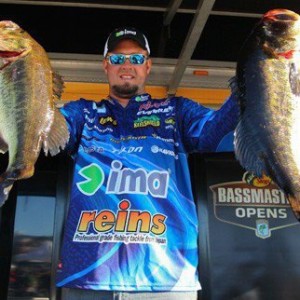 Unless you live in Florida or south Texas, the bass in your local lakes are likely swimming in some of the coldest water they see all year. Fishing for them can seem like an exercise in futility, not to mention a great way to expose yourself to some pretty unfriendly conditions.

As intimidating as the negatives of winter fishing can be, there are also some positives. The scenery can be amazing, there is little to no competition, and the fish you do catch are usually the right ones.

By focusing on those positives, FLW Tour veteran and Denali pro Michael Murphy has developed a healthy appreciation for winter bass fishing.

“We can talk all day about the cold, or how they don’t always bite well in the winter.” Murphy said. “But what I like to focus on is how refreshing it is to have the lake to yourself, see some beautiful scenery, and catch giant bass.”

Murphy has always been a jerkbait fisherman, a trait bred into anglers that fish the clear, blueback lakes around his Lexington, S.C. home.

“I spend a lot of time on lakes like Murray, Hartwell, Clarks Hill, and Wateree. All of them have clear water and have dynamite winter jerkbait bites. The bass are suspended in that cold, clear water. A jerkbait just hanging in their faces triggers strikes on even the worst weather days.”

Obviously, the first key to success with winter jerkbaits is to put on some cold weather gear and actually get out on the water. Once there, Murphy has the following tips to help you extend your bass catching season into the New Year.

Murphy said that the number one thing anglers struggle with when fishing jerkbaits in cold water is getting the setup rod right. “Having a rod that is designed perfectly for your technique is more important in the winter than it is any other time of the year. It’s already cold, your hands may not work as well, and you’re likely wearing a bunch of gear. If you’re frustrated from fighting with backlashes or missing and losing fish (which are all things that happen with jerkbaits when you don’t have the right rod), you’re not going to be successful or have fun.”

Murphy uses the Denali Rosewood jerkbait rod (S802JBC) that he designed, and pairs it to a 6.4:1 Lews BB1 casting reel. As the primary designer of the rod, Murphy put a lot of time on the water testing to ensure that it has the absolute perfect flex and power for fishing jerkbaits in cold water. 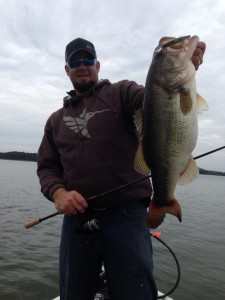 “We built the Denali jerkbait rod as an alternative to the high dollar custom jerkbait rods lots of guys were using. We shortened the rod handle so it doesn’t get in the way of heavy clothes, gave it the right parabolic bend to keep fish hooked up, and kept a good tip for getting the proper action.”

Winter bass are lethargic and often just slash at jerkbaits, resulting in poorly hooked fish. If you’ve got a big bass hooked up with just a single hook or outside the mouth, having a parabolic action with some give is imperative to keep the hook buried.

In addition to the parabolic flex, Murphy also designed the rosewood jerkbait rod to have a fast tip to impart the perfect subtle flash required to draw strikes in cold water.

“A lot of crankbait rods have that good parabolic action we were after, but they are kind of dead in the tip which makes them less than ideal for jerkbaits. We kept the flex in the mid-section of our jerkbait rod but added a faster, more sensitive tip so that you don’t lose the ability to precisely control your bait.”

As far as baits go, Murphy has had experiences with a number of different baits over the years, and said that almost all of them can be successful if the conditions are right. The one he uses the most though is the Ima Flit, which he also had a hand in designing.

“I look at the Flit as one of the only jerkbaits out there that can be successful under any conditions.” Murphy said. “It dives 6-8 feet deep like a Lucky Craft Staysee , has the subtle darting action of a Megabass Vision 110, the high pitched bb sound of a Rogue, and lacks the internal weighting system like a Husky Jerk. It does it all and I have a ton of confidence that it will catch fish no matter what conditions you’re experiencing.”

This might sound confusing at first, but winter bass often group up and suspend over different types of structures, making it important to fish a variety of different locations in a day to locate bass.

“I have seen winter bass suspend around almost any type of steep cover available.” Murphy said. “Sometimes it’s bluff walls, other times chunk rock points or dock pilings. Whatever it is though, it’s important to hit a bunch of spots in a day to figure out where the bass are. That’s where the fast comes in. I like to hit a spot for 15-20 minutes tops, and if I don’t get a bite then I’m off to somewhere else.”

The slow part refers to the actual fishing, and Murphy doesn’t stray from convention. He recommended anglers move from a jerk to more of a slide as the water temperature drops, while increasing the length of pauses. 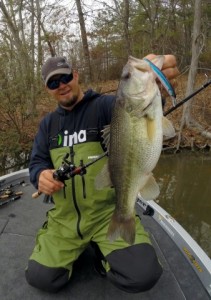 “In really cold water, I actually do more of a slide than a jerk. Baitfish don’t really dart in cold water, so you need to mute it down some. The important thing is to start with slack and end with slack, then experiment with your pauses depending on how the fish react.”

Remembering the circumstances surrounding a fish catch can be important at any time of the year, but Murphy said that it’s exceptionally important when throwing a jerkbait in the winter.

“Sometimes the bass will get really dialed in to a specific cadence or pause length. If you pay attention to what you were doing when a fish eats, you can often replicate it and score the rest of the trip. I’ve seen it before where they only eat a bait after a 5 second pause and won’t touch anything different.”

The same can be said for the type of cover or structure a bass is caught near. Even though winter bass are more lethargic, they will position on different structures depending on the weather, wind, or light penetration.

The Final Word
In addition to the pointers above, Murphy has one last one that he said may be the most important, and that’s to not let cold and winter stop you from getting on the water.

“I can’t believe how many fishermen put their rods and reels away when the calendar flips to January. It may be cold, but if you pick up a jerkbait and put some time on the water, you’re going to catch a lot more bass than you will from your couch.”