Dynamic – Pros Choose “The One”

Three top Bassmaster Elite Series pros were asked to choose just one lure to fish with this fall.

And then, just for fun, here in the heart of football season, they were also told to pretend they were the head coach of their favorite college team, and had just one scholarship to offer. The one catch – the ‘scholarship player’ had to be chosen from the current roster of their fellow Elite Series pros.

Jordan Lee – “Man, fall is the perfect time for hand-to-hand combat fishing on the grass edges,” says Lee, who finished a highly admirable 9th as a rookie in the final standings of the Toyota Bassmaster Angler of the Year points race.

“You gotta go big with this style of fishing, so I’m choosing a Texas-rigged Strike King rodent with a ¾ ounce weight, tied to 65-pound braid on a large-spooled Quantum EXO 200 reel,” says the 24-year-old Guntersville resident.

Lee, who was dominant as a Carhartt Bassmaster College Series angler at Auburn, chose a fellow Alabama pro as his scholarship recipient. “I’m picking Gerald Swindle, and he’s going to play quarterback,” says Lee. “Swindle’s 6’ 4” with big hands – all great quarterbacks have big hands, right? Plus, he’s smart, a motivator, a former athlete that still trains hard, and he’s a huge believer in leading with a positive mental attitude.” 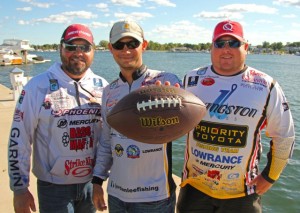 Jacob Powroznik – “The thing I love about this time of year is that bass get shallow again, and they’re eating,” says Powroznik. “They get on shallow laydowns, shallow docks, and shallow vegetation – and my top pick for just one lure would be a 3/8-ounce V & M Cliff Pace Flippin’ Jig on 15-pound Hi-Seas fluorocarbon line, spooled on a 7.3:1 Quantum EXO reel,” says Powroznik.

“With a 3/8 ounce flippin jig, you can swim it to look like a bluegill or baitfish, or drop it more vertically, to act like a crawfish – either way – they’ll bite that jig around all kinds of shallow habitat,” explains Powroznik.

Somewhat surprisingly, Powroznik, a Virginia resident, chose Clemson as his favorite college team. His scholarship offer goes to Russ “Big Daddy” Lane. “Russ is a big dude. He’s got a big upper body, but fairly slender legs. So I’m thinking he’s got plenty of size, but also enough speed to be my linebacker. Plus, he was a former college baseball pitcher, so I know he’s athletic.”

Greg Hackney – “Can I answer that my favorite lure for fall is a 300 Weatherby?” asked the quick witted 2014 Toyota Bassmaster Angler of the Year, who is obviously an avid whitetail hunter too.

“Man, that’s a tough question – just one lure – wow – I guess I’d say a ¾ ounce jig in a color called blue craw,” decided Hackney. “I’ve caught a ton of bass on a heavy jig in the fall.”

“Now, one tip I’ll give you, is that the water is typically pretty clean and clear in the fall, so instead of using braided line, I’ll use 16 to 20 pound Gamma fluorocarbon,” explains Hackney. “If I’m throwing the big jig on deeper structure, I’ll use a 7’ 6” Quantum rod, but if I’m pitching grass with it – I’ll beef up to a heavier 7’ 10” rod.”

As far as Coach Hackney’s pick for a football player to join his beloved LSU Tigers – no surprise, he again was thinking outside the box. “Give me Carl Jocumsen – all those Australians are good kickers – he’s gonna be my kicker – I bet he’s good at it.”