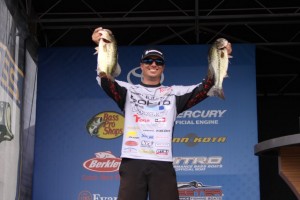 While they can add worlds of excitement, they can also really let you down when it comes to a tournament. Hot one minute, gone the next; pop up within casting distance of the boat, disappear, then surface 500 yards away. They can also be so overly focused on the baitfish they are targeting, that anything other than the real thing will often go untouched.

Brent Ehrler, a Bassmaster Elite Series pro from Huntington Beach, Calif. knows the pitfalls of the pelagic feeders, but he also knows how beneficial they can be. In order to capitalize on the opportunity they provide without suffering the burn associated with them, he has developed a strategy.

“Schooling fish can be a lot of fun, but they can really leave you hanging as well,” he said. “I tend to try to build a strategy for a tournament that doesn’t rely solely on them, but incorporates them into an overall greater plan.”

His approach is to feed when their offering, but not go hungry when they are less than generous. However, he is always prepared for the opportunity.

When do they School?
The truth is that one can find bass schooling anytime and anywhere; however, the most frequent time they do school on the surface is in late summer through the fall. “Bass seem to really get focused on the shad at this time of the year and they can pop up any time throughout this season,” said Ehrler. “In the summer, the schools tend to show up more on main lake areas, but as fall progresses, they start to move into creeks and back of pockets following the shad migration.”

He also said that they tend to do it more under low light conditions. “The first hour to two hours of the morning are typically the best time to find schoolers,” he said. “After the sun comes up, they tend to stop because the shad seem to go deeper.” 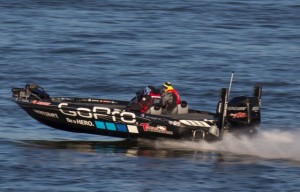 Where to Look
Ehrler said he tend to concentrate his search efforts around the main area of the lake, but he looks for them to be around larger creeks primarily. “In my opinion, not every bass in the lake immediately runs up the river arms the moment the shad start migrating,” said Ehrler. “Shad migrate into longer creeks and bigger bays with water flow, so it’s more likely that bass move into those creeks closer to them.”

With that said, Ehrler begins looking for schooling fish early in the morning on main lake points leading into larger creeks. “Larger creeks are kind of like rivers in themselves, so they have all of the qualities of the main river,” he said. “I’ll start looking while I am practicing around those points and look inside for activity. If I don’t find it out towards the mouths, I tend to look in the absolute back end of the creeks.”

He also said that bass tend to feed against an edge, to help them pin the baitfish against something. “Whether it is the surface, the back of the creek or a wall, fish push the bait against something so they can only go one direction,” he said. Then they absolute begin gorging themselves.” 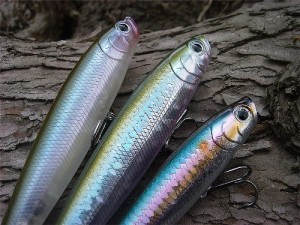 Tools for School
Without a doubt, topwater and very shallow offerings are the best when it comes to targeting schooling fish. Ehrler chooses lures that he can move very quickly so he can trigger a reaction from the frenzied bass. His first choice is a Lucky Craft Gunfish topwater and his additional offering is a Gary Yamamoto Custom Baits D Shad soft jerkbait.

He chooses the size of his topwater bait by the size of the baitfish that are being targeted. “I really try to match the hatch in terms of size,” said Ehrler. “If the bait is small, then I go with a Gunfish 95, but if they are larger, I turn to a 115 model because it gives me a larger presence in the water.”

His favorite colors to use are the Lazer Clear Ghost, a crystal clear body with holographic foil and flake, and then the ever popular Ghost Minnow. “I really don’t want them to get too good of a look at the bait,” he said. “I want the action to draw them in.”

When it comes to the Yamamoto D Shad, he said that he tries different colors until he gets strikes. “It’s always a shad color; Pearl or Smoke Shad, you just have to find one the works,” he said. “Once you get the color, then it’s all about casting and retrieving.”

He ties his Gunfish to different rods depending on the size of the bait. For the Gunfish 95, his choice is a 7’ medium-light Daiwa Tatula rod. For the 115, he uses a medium action version of the same models to handle the slightly heavier weigh. He pairs both rods with Daiwa’s 6.3:1 Tatula Type-HD reel spooled with 30-pound-test Sunline FX-2 braid and a short, two foot section of 17 to 19-pound Sunline Defier Armilo monofilament for shock absorption.

His D Shad is set up with the 7’ medium action Tatula rod and 6.3:1 Tatula Type-HD, but he spools it with 14-pound-test Sunline FC Sniper Fluorocarbon. He rigs the lure on a 4/0 Gamakatsu EWG hook. 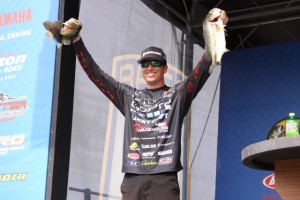 Work It!
Ehrler said the key element to his retrieve is speed, followed by erratic action. “Schooling fish tend to respond to speed, so I work my topwater quickly in short twitches,” he said. “I work it from just outside the school, then back to the edge closest to me trying to make them respond.”

He works the soft jerkbait quickly as well, but institutes a pause to mimic dying baitfish. “It’s not a long pause, just enough to make it look like it’s injured,” he said. “Then I pick up my retrieve and keep the cadence going.”

Final Tips
Ehrler has noticed two things that he wanted to impart to people looking to target schoolers. The first is to work quickly. “You only have so much time to really target the bite, so work quickly,” he said. “Work a spot for a few minutes, then move on to the next one; you have to strike when it’s good.”

Other than that, he said not get too locked in to only targeting schoolers. “I always have a regular plan for the hours after the schooling bite has died,” he said. “I’ve never done well in areas that bass school in doing something else, so I always try to have backup water that I can fish throughout the day to make sure I have my bases covered.”