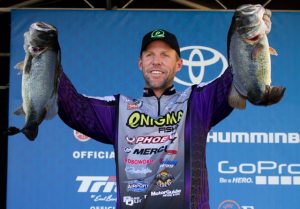 Aaron Martens, hot off his second place finish on the Sacramento River, has added the Picasso Shock Blade to his arsenal. Martens’ deal with Picasso covers the newly released Shock Blade vibrating jig.

“I love vibrating jigs and the Shock Blade by Picasso is an excellent product. It’s made in the USA and their unique, patent pending design restricts the movement of the blade which creates great vibration while allowing the lure to stay down in the strike zone without getting any lift.” said Martens.

Terry Monteleone, president of Picasso Lures said, “Aaron has proven he’s one of the greatest anglers of all time. He does it year in and year out, and to have him fishing our Shock Blade and working with us to develop future Shock Blade versions is something we are excited about.”

Martens and Monteleone have been working on this deal for some time. Martens said, “I don’t take partnerships like this lightly. I worked this bait thoroughly for months before the Bassmaster Classic, and wanted to thoroughly test the product before I made my decision. The fact that I am going to put my picture on the Shock Blade package means I truly believe it is a great product and will be using it when the opportunity arises.” 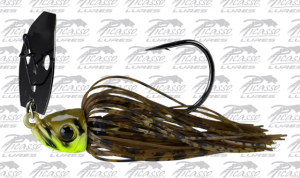 Monteleone agrees, “Just like Aaron last week on the California Delta, sitting and working on a big fish sometimes pays off.  It was a long few months working with Aaron to make sure he loved the Shock Blade. He wanted to see it work in cold water, dirty water, warm water, and more importantly, to see it catch fish. To land a giant name like Aaron Martens, and especially someone as detail-oriented and precise with his lure selections, is great for Picasso’s growing brand.”

Martens heads to Lake Havasu in seventh place in the Bassmaster Toyota Angler of the Year race. “Havasu is one of my favorite places to fish. I haven’t made a cast there in a while, but I have a feeling a Shock Blade might be on my deck for the tournament,” said Martens.

Picasso Lures’ Shock Blades can be found at major retailers around the country or at PicassoLures.com.