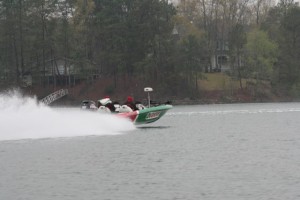 I’m only writing this because there was a boating accident this past Saturday on the California Delta involving a bass boat striking an object in the water. The motor was sheared off at the mounting bracket and both anglers were ejected.

One went home, the other did not; apparently his inflatable PFD (Personal Flotation Device) did not inflate.  To be fair, I do not know all of the details to state for sure, and I’m not here to retell the tragedy, but it reminded me quickly that I’ve thought of making some changes to how I operate with PFDs in my own boat.

I’ve used inflatable models exclusively for several years. Part of the reason is that I travel so much, and I need to pack my own PFD because I’m a big guy, and there is no guarantee that someone will have one to fit me.

I’ve had two instances that made me start thinking about making changes and this latest incident has made me finally decide that my boat will not slide off of my trailer again without traditional PFDs being worn by every party in the boat.

Both of the things that made me start thinking about it involved travel. I typically pack my inflatable in my suitcase, then transfer it to a boat bag when I arrive on site. When I return home, it gets transferred into my boat for the next time I go fishing.

One time, AFTER I loaded the boat on the trailer after a fishing trip, I took off my PFD to put it in the storage compartment and felt something loose inside. That loose item turned out to be the co2 cartridge that was unscrewed from the mechanism an sitting in the pouch at the bottom of the material. Had I gone out of the boat that day, it would not have functioned.

I checked all of them to make sure they were operational and went about my business. Then, after making checking them on a more regular basis, I returned from another trip to find that part of the fitting on the cartridge had broken causing half of the mechanism to engage without puncturing the top, and the status indicator showed green, meaning armed and ready.

I started thinking about switching to a traditional PFD then, and I am now.

That’s not to say that inflatable PFDs need to be discontinued. But, I will say this, there are some users that are playing Russian Roulette in using them.  let me start by saying this.  If you are dead set on using inflatable styles, by all means, don’t even consider a manual style inflatable PFD.  If you are knocked unconscious and cannot pull the rip cord yourself, then you might as well not have been wearing anything at all.

First of all, a friend of ours from the Northern California and his friend performed tests in his pool to see what the capabilities are. They found that the unit would float him – a 200 pound grown man – when he had shorts, a t-shirt and tennis shoes on. When he changed his shorts for jeans, he could not float without assisting himself, and when he wore rain gear, he started to sink. I’m a little bigger than 200 pounds, so I wonder if they would keep me afloat under any circumstances. 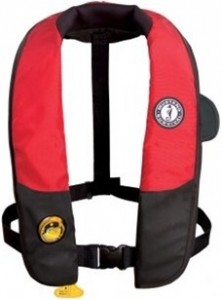 Secondly, most of them require annual service. Users of the inflatable PFDs are supposed to maintain them with a service kit at least once a year, and the kit can cost as much as $40. The bottom line is this, if you can’t afford to service them annually, or are the type who is lazy and won’t do it, you are playing Russian Roulette each time you go boating.

The only inflatable that even would be an option for me and my family would be the Hydrostatic version by Mustang. The HiT mechanism requires no maintenance for five years and even has a date for replacement on it. I will have to check mine to see the date, but I am beginning to wonder if it would keep a guy as large as me afloat.

Because of that, the only choice for me from now on will be the traditional zip and buckle style of PFDs, and they will be in my boat before I go out again.

Even with all of that, I cannot tell you how many anglers I see that do not wear PFDs unless they are in a tournament. I got news for ya stupid, accidents happen in practice and fun fishing too. I realize that some of us may be missed more than others, but the fact is, everyone has somebody in their life that they like to see walk in the door or receive a call from, so buckle up.

There are so many people who take the tact of “it’s my right” when it comes to the topic of seatbelts, motorcycle helmets and PFDs, but that is just stubborn vanity. I lost a cousin to a motorcycle accident because he wasn’t wearing a helmet when his bike was rear ended and we’ve all known or heard of someone that has passed away because they weren’t wearing a seatbelt in a vehicle or PFD on a boat. Grow up, buckle up.

I don’t use a drag on my spinning reels because I have seen them stick too many times and cause a break off; I backreel instead after I’ve hooked up. I know, expensive reels like my Lew’s Team Lew’s Gold (and every other high end reel you all love) have great drags and I can count on them. But, the one time it sticks and a tournament difference maker breaks your six-pound test causing you to lose a win or a check will change your mind in a hurry; shouldn’t this be the same.

I was covering an FLW Tour event on Lake Norman in 2008 for BASS ZONE.com. I was in the boat with my camera boat driver taking pictures of an angler in a creek arm when I heard a boat coming towards us. I like to have running shots of anglers to use in articles, so I routinely turn and take a few shots of the passing boat. A little while later, long after the tournament, I was looking for images of that angler for a story, so I went through my files and found those. Guess what? His life jacket was on, but unzipped. 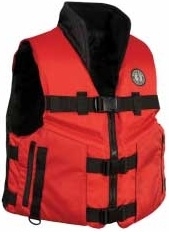 My promise to you is this. If I am covering a tournament somewhere and I see you running around with your PFD off, or unzipped, or I see you without your kill switch hooked up; I will turn you in to the Tournament Director.

You can get mad at me, you can hate me for turning you in for such a “petty rule,” but, when you have to explain to your wife that you got disqualified because someone cared enough for her, her children and her husband to make that call before the call is coming from a Search and Rescue Team, thank me then.

Changes are coming for my boat and whether it is to switch to traditional PFDs or commit to servicing your inflatables regularly; I suggest you make safety a priority for you as well. Those who care about you will certainly thank you for it opposed to saying “if only.”  I love my family, and I would hope you would do the same thing for me.

Editor’s Note – after publishing this piece, we decided to contact Mustang Survival to get some additional information on their products. We specifically wanted to know about their Accel100 Fishing Vest and how buoyancy in their inflatables relates to a person’s body weight. The customer service rep we spoke to said that there is a mathematical equation for figuring out how much buoyancy an angler needs.

If you own a PFD with 35 pounds of buoyancy, and you weigh 225 pounds, you could figure out how your PFD will accommodate you. The equation takes into consideration the amount of water weight in your body; which is 80-percent of your total body weight, and accounts for the body fat percentage. The average American male has somewhere between 18 to 24-percent body fat.

The reason we subtract these; according to Mustang Survival’s Customer Service Rep, is because water and body fat are neutral or naturally buoyant, so they are subtracted from the total weight. So, an average 225-pound man, with 20-percent body fat would have a factored body weight of zero pounds (225 minus 180 pounds of water weight, minus 45 pounds of body fat). This way, you can account for clothing and water absorption into the clothing when deciding on a model.