Video – Massole Searches for B.J. Haseotes at the World Series 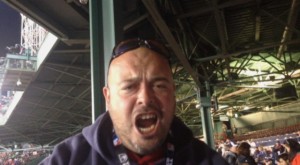 Massole at Fenway Park – “The Red Sox are Gonna Win the World Series!”

One of Massole’s favorite Elite Series pros is B.J. Haseotes from Centerville, Mass. (imagine that).   When he heard that his favorite angler was going to be at game two of the 2013 World Series between the Boston Red Sox and the St. Louis Cardinals at Fenway Park, he decided he need to go find him for an autograph and to see if he would take him fishing.

He thought it would be a good idea to film his search.  So, after a few hundred dollars in tickets, he entered Fenway to search for his fishing idol.

But, as Massole tends to do, he got a little distracted.  After a few beers and finding his seat after batting practice, he added a few more beers and the search was over, Massole was being his typical self helping everyone around him enjoy themselves at his expense.

Well, because he did put the effort out, and because we really hope that B.J. Haseotes will run across this video and decide to contact Massole to take him fishing (we think that trip would be very entertaining too), we’ve decided to air this collection of Massole Adventures at Fenway Park.

The truth is, that given his penchant for being enthusiastic, we fear that Massole may have decided to celebrate the eight Red Sox World Championship by rubbing it in the noses of some Yankee fans, that he may be in an emergency room somewhere.  Just in case he is, we hope this video serves as a tribute of sorts.  But, we’re sure he’ll turn up in some pub or gutter somewhere in time to film another video.

Enjoy Massole’s latest adventure as he visits Fenway Park, during the World Series in search of B.J. Haseotes.