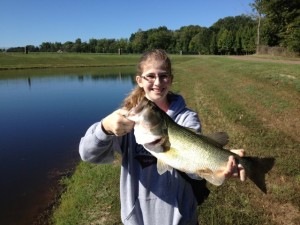 Ivy with a Big Largemouth

We have spent time fishing with our kids, we have bought them rods and reels we could have only dreamed of owning at their age, and tried to explain the basics of fishing to them.  The kids have put up with dad constantly talking about fishing, listened to dad correct their casting techniques, and have been bored to death by seasonal fishing pattern reviews on the way to the lake.  Through all of it unbelievably we have both decided that fishing together is pretty cool.

How do we keep our children’s interest in fishing and hold their attention on the water?  The answer is the same as it is for you – catching fish!  My daughter and I fun fish together and fish tournaments together, but the one thing that was missing when we started off was her consistency in putting fish in the boat.  Kids want to feel like they are contributing, whether it be in a tournament or bringing home a stringer for dinner.

Adults have trouble always putting fish in the boat and even we get bored if the fish aren’t biting, but we also know that the fishing could turn great at any minute.  After a few hours without a fish it’s hard to convince a youngster to stay focused and believing that a lunker could bite on the very next cast.

Let’s face it catching fish is fun; the tug on the line is exciting no matter if it is a bream, catfish, or largemouth.  If the kids are having fun they will want to keep fishing, so dads let’s keep fishing fun for the kids!

How do we increase the odds of our children catching fish?  That depends on a lot of variables only you can determine.  But, some of them include the child’s experience, age, time of year, weather conditions, lake, type of fishing you are trying to do (tournament or fun), etc.

I made the mistake of getting my daughter smaller lures when she first started fishing.  My reasoning was that the smaller lures would be more likely to catch fish.  What I didn’t think about was that she wouldn’t be able to cast them very far, her 20 foot casts were not very productive 80 feet away from the bank.  After I got her regular sized baits to fish with the casting distance and accuracy improved.   After a trip or two she was fishing with spinnerbaits, rattle baits, and top water baits very proficiently.

Just like her dad she was never very excited about fishing worms and jigs, because they were so slow and honestly not all that fun to fish with. I prefer to “chunk and wind,” but I have realized the effectiveness of the slower worm and jig presentations and have made it a major part of my fishing strategy. 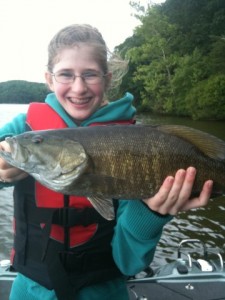 Ivy and a Shaky Head Smallmouth

In a tournament several years ago I finally convinced her to try a shaky head.  It was after a slow and disappointing morning of fishing for her while she watching me catch fish after fish with a jig. I gave her a brief tutorial on how to fish it and she made her first cast.  I resumed fishing and just a minute later I heard a scream of excitement “DAD!  I got one!”  I heard that same excited scream for the rest of the day.  I also heard lots of laughing that day; she was having fun.

She caught over 30 fish that day, exhausted my finesse worm supply, and caught a three-pound smallmouth to top off the day.  We didn’t win the tournament that day, but weighed a respectable full limit that she contributed toward, and we certainly made some memories we will both have for a lifetime.

Why did I suggest a shaky head for her?   Because it is a proven bass catching bait. Pros have successfully used it fishing out of the back of the boat behind other Pros.  Bass will hit it when other faster moving or larger slow moving baits get ignored.  I cannot tell you the number of times she has thrown right behind me and caught fish after they ignored my jig.

A shaky head has a lot of flexibility.  It does not have exposed hooks so it comes through more snags than exposed hook baits.  It doesn’t require a lot of fisherman input or a high level of experience to use.  The bait can be fished in many different ways.  It can be fished fast or slow, with lots of action or very little action, fished in deep water or shallow water.

It allows for fisherman input so they feel like they are working the lure, and the fisherman feels like (rightfully so) they had a hand in fooling the bass into biting. It doesn’t require a big or special hook set when the fish bites, since the hook is thin it doesn’t take a lot of pressure to penetrate the fish’s mouth.  To set the hook simply reel down and when you feel the fish set the hook with a quick sweep.

To top it all off, a shaky head is a inexpensive bait.  Jig heads and worms are much less expensive than hard baits so losing a few (which is going to happen) doesn’t hurt your wallet. For all those reasons I felt like the shaky head was the perfect lure for her in our area.

Half way through Ivy’s first day fishing a shaky head she asked if she was fishing it correctly.  Her technique was not remotely correct according to any of the published “How To Fish A Shaky Head” articles, but with her catching fish consistently I suggested she not change a thing.

That brings me to another suggestion for when your youngster starts fishing a new lure is to let them fish it.  Give them an overview of how to fish it, but don’t be overly critical of their technique and let them experiment.  There are lots of articles written that go into great detail on how to fish a shaky head, but in my experience even with fairly big movements of the rod tip on a semi slack line the bait really doesn’t move very much, this is especially true with very limber rod tips and in water deeper than 15 feet.

Both Ivy and I use a ball head ¼ oz Strike King shaky head jig in water from zero down to 25 feet.  The jig is tipped with a Strike King Super Finesse worm, they float and are very durable. Ivy and I both use 10-pound-test Bass Pro ShopsXPS fluorocarbon line, hers is on a spinning rod and mine is on a bait caster.  The basic retrieves we use are:

Shaking in place – Just as the name implies wiggle the rod tip and try to keep the jig in the same spot.  After shaking it drag or hop it toward you a few feet and start shaking the rod tip again.  Shaking the rod tip makes the worms tail quiver enticing the bass to bite.  In tough conditions long pauses between shakes have really produced well. 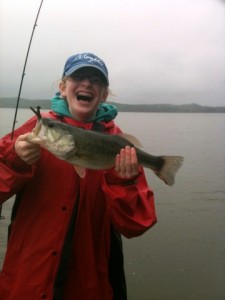 Dragging – Is similar to a Carolina Rig retrieve.  When the fish are more active drag the jig maintaining contact with the bottom and use a brief pause to reel up slack.  A variation could be longer pauses, adding a shake, or a shake pause.  The dragging retrieve can cover lots of water.

Hopping – This retrieve is similar to the standard jig retrieve and uses short hops with pauses or shakes added.  This retrieve is very useful when fish are suspended just off the bottom or when fishing chunky rock since it allows the jig head to bump over the cracks and gaps when a traditional straight retrieve would get hung up.

I prefer to keep my rod tip low to the water, I believe it helps me feel the bait better.  If the wind is blowing a low rod tip will still let you work and feel the bait since there is no big line bow from the wind.  Around chunky or “grabby” rocks where hang ups are likely I will keep the rod tip up which will help avoid hang ups.

Vary the retrieve and try different things until you find presentation the bass wants, keep in mind that the bass don’t read the same books and articles that fisherman do!

Ivy’s nickname is now “The Shaky Head Queen,” and to this day her go to bait is a shaky head.  Will a shaky head work every timeout on the water?  Probably not, but the moral is to let the kids have input on baits they want to fish.

Be supportive, suggest proven lure options for your area and for the time of year, and when they are successful make a big deal out of it, because it is!  And always try to put the kids first.

For more about our organization – visit www.kidsfirstfishing.com