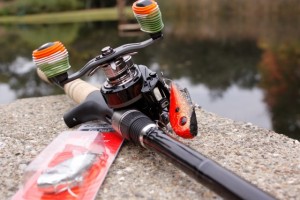 It’s fall and the bass are chasing shad.  Earlier this week, we did a story called “Don’t Give Me Any Lip.”  The story was about using lipless crankbaits in the fall to catch bass that are hysterically chasing shad all over the shallows.  We covered several different baits, but we left one out – intentionally.

Our plan has been to do a review on the Livingston Lures Pro Ripper, so we decided to save this unique lure for its own feature.  We received the Pro Ripper earlier this summer, and we had to wait until it was time for lipless crankbaits for us to put it through its paces.

Like all Livingston Lures products, the Pro Ripper is unique because of the technology integrated into the body of the lure, but also has a few features that make it a lure that is best used in some very specific situations.  We’ll give you some insight into the lure, and help you decide how to use it best.

The Pro Ripper has a body shape that incorporates some of the best features of some of the more popular lipless baits on the market.  It has a flat spot on the top of the head in front of the line tie, which helps to create the vibration on the retrieve.  The body 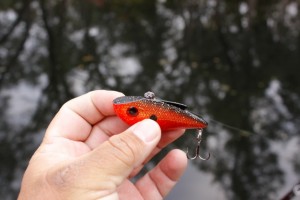 is wider at the top and thinner at the bottom so it creates a tight vibration, with a slight fluttering as the bait drops.

The bait comes in at 2/5 of an ounce, which is lighter than many of the baits in its size category.  It also features a subtle BB type rattle which works on the retrieve while the internal sound technology works when the bait is paused or sitting on the bottom.

Most people are surprised when they first hear the Livingston Lures sound technology live for the first time.  They expect to hear a very audible sound when the first touch the front and rear hook hanger to activate the sound mechanism.  However, give Livingston Lures much credit for making the sound a more subtle sound.  with sound waves traveling further in water, it doesn’t take much for a bass nearby to pick up the sound and become curious.

The Pro Ripper is designed well with tight wiggling action that will attract bass by vibration and flash, while the sound technology is seemingly designed as the closing attractor once a predator draws near the lure.

Pro Ripper is available in 12 freshwater and 12 saltwater colors.  Outside of the colors, the difference in the two versions is that the freshwater version comes with black nickel hooks while the saltwater comes with tin plated hooks. 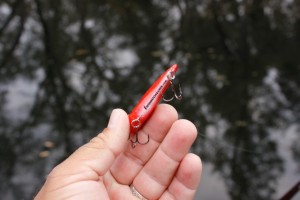 Application
we tested the Pro Ripper and found that it has two areas that it really shines.  The first is on a steady, medium retrieve.  Of course a few twitches of the rod tip really brings the bat to life, but a steady, medium speed retrieve will work well in water shallower than six feet.

The other area that it truly works well is on a stroking type, lift and fall retrieve.  The Pro Ripper has a good, tight wiggle on the retrieve, and while it doesn’t wiggle on the fall like some of the other baits in its category, it stays upright and waves slightly on the fall.  When it does reach bottom, it stands up its nose the majority of the time, which makes it look like a baitfish rooting on the bottom.

It also seemed to come through sparse grass fairly well without wads of moss bogging down the whole bait, so it is the type of lure you could reel into a clump of grass and rip free creating reflex strikes. 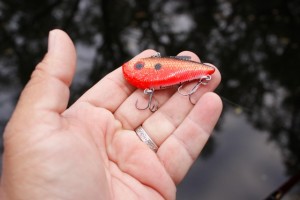 In the Real World
The Pro Ripper does have one area that would make us use a different lure, and that is when bass are striking a lipless bait that is being burned over shallow flats.  When we used a hyper fast retrieve on the lure, we found that it tended to turn its belly up at the highest speeds, but when we backed it off to that medium to medium-fast retrieve with a 6.4:1 retrieve reel, it tracked true.

We also recommend changing out the stock hooks on the freshwater  version especially because they seem to be a bit too small.  We had two strikes on our first outing with the lure on a small neighborhood pond.  One we had pull off, and the next pecked the lure as it was paused on the bottom.  The rod never loaded up, so we didn’t get a chance to set on that one.

That strike intrigued us quite a bit, because it came as the lure was sitting on the bottom completely still.  So, we feel as though the sound technology had to have played a part in drawing that strike.  It also came on a pond that we use for testing action of lures on the retrieve for these reviews.  The pond is quite clear, so we can see the lures working, and we have only seen one bass swimming in it over the past year, so the population is not great.  In fact, in the past year, we have not had a strike or caught a bass out of it while testing everything from worms and jigs, to topwaters and jerkbaits, so to get some feedback on it was a positive for the Pro Ripper. 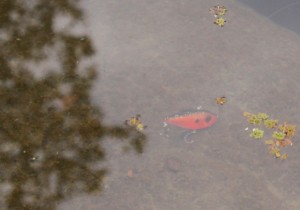 The bait cast a little easier on the medium action rod because of the lighter weight, but both combos handled it well. To try the Livingston Lures Pro Ripper or their other baits,  pick them up at www.monsterfishingtackle.com