Well, my summer vacation is quickly coming to an end. I’m now finally starting to feel better after being sick for a week. I spent several hours over the last couple of days putting line on new Revo Premiers and stringing up the first shipment of Dobyns Rods.

My Son Mitchell’s been running around acting like a fish so I can get a feel for the actions of the rods. I’ve been getting a ton of feedback from die-hard Dobyns fans over the last couple weeks and now I can say I finally see what all the fuss is about. My only problem is going to be trying to narrow my selection down because there are too many “keepers”. 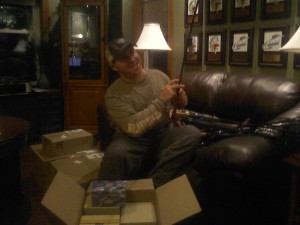 My wife and I are closing on some property we purchased on the shore of Lake Erie. It’s been a 3 month, very complicated ordeal and we are so glad it is finally over with. I can actually see the spot from my future front yard where I’ve caught several fish over 7 pounds, can’t wait to move up there, hopefully late this summer or fall. We will begin building our house in March if the weather cooperates, that’s iffy in this neck of the woods though.

We also look forward to moving my Grandpa in with us. Since my Grandma passed away this past summer it’s been a little tough, they were joined at the hip for 65 years, lately he’s been doing fairly well though considering. We are trying our hardest to keep him busy and plan to bring him to Florida with us later this month for the FLW Tour season opener. He came along to Texas at the end of last season and we had a great time. He also does a good job taking care of our dog, Isabella.

Man I can’t wait to fish on liquid water. Everyone’s getting their boats lately and preparing them for the tournaments, but because I was so late getting things rolling, I probably won’t get mine until days before the first event. I’m going crazy. The first EverStart Series tournament was this past weekend on Okeechobee and watching the live weigh-in has got me so fired up I can’t take it anymore. Mitchell and I will have to get back out on the ice soon to take the edge off a little.

Ya know, this would be a great time for sponsors to visit instead of trying to squeeze trips in here and there during the season, but they are all scared of the cold and ice…babies!!!!! Most people think it would be boring, but it’s fast paced, run and gun style with me and when you get on em, it’s on! Everyone who tries it becomes an addict and wants to moves up north, so maybe it’s better if they don’t come, ha ha. Yeah, on second thought…Stay home where it’s warm!

Steeler mania is in full effect this weekend at the Lefebre house. After a first round bye week, Pittsburgh plays at home at Heinz Field this weekend. We live Steeler football around here; it’s been that way since I was a baby, Terrible Towels will soon be flying. Isabella even has her own official dog jersey that says “IzzaMalu” on the back, it’s pretty funny. It will be a rough game this Saturday against Baltimore.

Stop by my Facebook page and say hi when you get a chance. As you will see I am very active on there, keeping up to date with photos, posts, videos, and announcements daily. It’s a perfect way for us to stay connected and learn from each other.

Macy just got out the Wii, gotta go! Hope I can talk her into playing Rapala Pro Bass Fishing!

Visti Dave on the web at: www.davelefebre.com