Springtime is for Lipless – with Terry Scroggin

It’s late spring in much of the country and bass are moving up onto the flats in preparation for the spawn.  While the smaller males are the first to really show up in the shallows; the bigger females are not too far behind.

This is the time of the year when big females have spawning on their mind, and their preparation for the event of laying their eggs includes feeding voraciously to bulk up for the laborious process ahead.  However aggressive they may be, the biggest bass tend to be the shyest, so they may not be up in the shallows completely; though not too far away. 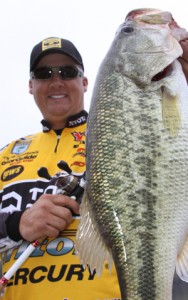 For a tournament angler, finding these females quickly is the hope; and getting as many of them possible in the boat is the ultimate goal.

The five-time B.A.S.S. winner is a fan of not only the speed of the lipless cranks, but also in its versatility for producing quality bites in a variety of settings.

Shallow or Deep
Scroggins believes the lures are effective in very shallow water to the deeper outside edges of spawning flats in the spring time.  The Florida pro said he chooses the lure based on the depth of the water and the cover he is targeting.

In the earlier prespawn, Scroggins typically chooses the 3/4-ounce XR75 lipless crankbaits.  Mainly because he said that he would be fishing nearer the outside edges of the flats, but also because it appeals to the need for a bigger meal.

However, as the bass begin to position themselves tighter towards the actual spawning areas, Scroggins turns to the smaller 1/4-ounce XR25and 5/8-ounce XR50 lipless crankbaits.  He makes the size distinction based on the depth of water, and the density of the grass he is faced with.

In super shallow water, or if he is faced with heavy grass growth in his area, Scroggins chooses to throw the smaller XR25.

However, if he is fishing water that has sparse grass, or is not ultra shallow he goes with the XR50.  The only other consideration for size is when baitfish are very small; which forces him to choose the smaller bait as well.

Retrieve
His retrieve is also dictated by the position of the bass. “In the early spring, before they get up in the spawning areas, I really like to yo-yo a lipless crankbait,” he said.  “It’s a great technique for working around the grass on those deeper edges, and it mimics the fall of a dying shad really well.”

He makes long casts to the edge of the flat and sharply lifts his rod from the 10:00 to 12:00 position; allowing the lure to fall down on slack line; the vast majority of strikes occur on the fall. 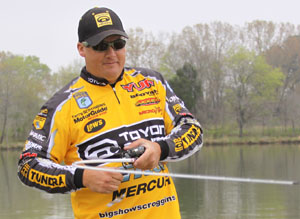 He tends to use the more traditional cast and wind retrieve in shallower water, mainly because there is not enough room to rip the lure up and down in skinny water.  He does caution to avoid a straight retrieve as much as possible.  “I try not to make steady retrieves,” he said.  “I want the lure to stop and flutter from time to time; even when I’m burning it, because it makes it look like a dying baitfish.”

Equipment
His equipment of choice for the lift and drop approach is a stiffer 7’3” medium heavy Duckett Fishing Micro Magic rod, and a 6.4:1 Team Lew’s baitcasting reel spooled with 20-pound-test Hi-Seas 100% Fluorocarbon line.  “I really like the XCalibur Tackle XRK75 One Knocker for this technique,” Scroggins said.  “It has the right weight and action for the fall, and generates the most strikes for me when I’m yo-yoing a lipless crankbait.”

He also uses the heavy rod for the smaller baits, especially if he is dealing with heavier grass and big bass.  The combination of being able to quickly snap the lure free from grass with a heaver action rod, as well as the more powerful action for hooksetting are favorable considerations for Scroggins.  He does downsize his line to 15-pound test fluorocarbon though to avoid overpowering the lure.

Avoiding Lost Fish
Realizing that the lures have a penchant for having fish become dislodged during the fight, Scroggins has experimented with equipment for keeping them hooked.  The first consideration was to try and use a heavier action rod; but he also said line can make a big difference. 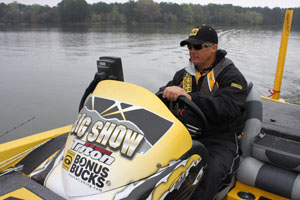 “I really like to use lines with very little stretch; that’s why I typically use Fluorocarbon,” he said.  “But, I’ve also been known to throw them on Hi-Seas 30-pound-test Grand Slam braid as well; it really helps bury the hooks deep and keep them hooked too.”

Colors
Scroggins said that he likes to use red, crawdad colored lures in the spring because it appeals to the bass’ natural taste for crayfish in the spring. Outside of choosing crimson hued plugs, he allows the water clarity to dictate which colors he will throw.

“If I’ve got decent visibility; say two feet or more, I prefer the Foxy Momma colored lure.  It mimics a natural shad color, but also has some flash to it,” he said.  “If the water is dirty; with less than 18-inches of visibility, then I like to throw a color called Lemon Lime, which is chartreuse with a green back.”

To Rattle or Not
Scroggins is a fan of all lipless baits; whether they are the traditional style rattling bait or the new One Knocker style produce by XCalibur.  Both have their place in an angler’s arsenal, but Scroggins has a couple of considerations for when to choose the One Knocker over the rattling version.  “I prefer the One Knocker for the Yo-Yo technique because it has a little wider action,” he said.  “I also like it if there are a lot of anglers on the water throwing lipless baits.  Having a different sound can be key to triggering strikes.”

Wrapping it Up
Scroggins believes that lipless crankbaits are one of the best lures to achieve maximum results in the spring, and suggests anglers give them a try.  “There are plenty of ways to catch quality bags of bass in the spring,” Scroggins said.  “But, I don’t believe there is a faster way to find tem, or to put a heavy bag together than a lipless crankbait.”