Covering the Bottom with John Murray 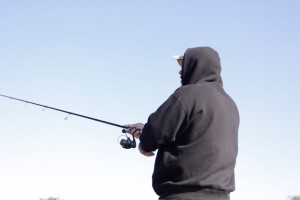 If there is one thing that John Murray is known for more than anything, it would be fishing deep structure.  He has been called a master dropshotter, a master at finesse, but one skill that years of staring at fishfinders has given him that covers any offshore technique; it’s reading structure.

Good thing too.  Because being a native of the West, this Phoenix, Ariz pro has spent his life fishing waterways where bass spend the bulk of their lives deep, as opposed to the rest of the country where they spend a lot of the year fairly shallow.

Those years of fishing tournaments in the West have taught him a method for covering water and finding fish when they are on the bottom.  “Finding fish is the key to being successful as a tournament angler,” said Murray.  “Covering a lot of water quickly has always been key; but not easy on offshore structure; so I had to adapt.”

He used to have a couple of tools for doing it, but over the past several years, he has come up with a system that helps him cover it quickly, and effectively.

Here’s how Murray “Covers the Bottom”

The real key to finding fish quickly; as Murray said, is to move quickly yourself.  But, when bass are on offshore structure, the light line, light baits approach of the past really tends to slow an angler down.  Murray tried to fish faster with jigs, but they are at their best the majority of the year on a crawling technique.

As swimbaits became more popular, he started experimenting with those, but finding one that appeals to keepers as well as large fish was tough; he had one or the other.  Then he encountered the River2Sea Live Eye Bottom Walker.  “The Bottom Walker is heavy, and actually designed to be fished on the bottom,” he said.  “It is shaped like a bigger shad, so it gives me a great lure to appeal to bass on a shad bite.”  Murray said he prefers to use the Bottom Walker 120, a 4-3/4-inch bait that weighs one ounce, with a stout hook for use with heavy line.

While he used to utilize a standard rubber skirted jig to try and cover the bottom in the past, he has picked up the Gene Larew Biffle Bug and Tommy Biffle Hardhead.  “The Hardhead and Biffle Bug give me the added benefit of action with the appendages that are built on to it,” he said.  “So, as I move it across the bottom, it kicks its tails and creates vibration in the water that draws strikes.”

Finally, if the conditions are more difficult, Murray will turn to a dropshot rig.  “A dropshot rig is a great way to get bites from finicky bass,” he said.  “But, I still want to be able to cover water, so I use a little heavier weight and keep the rig moving.”  His choice here has become a worm he designed for Gene Larew; the TattleTail worm; which features a small kick tail that emits vibrations while the rig is moving across the bottom.” 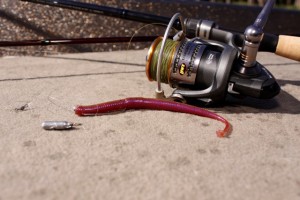 He said these presentations work much like jerkbaits, topwaters, or slow sinking swimbaits in the shallows.  “The great thing about reaction baits is that they draw fish to them during a retrieve,” he said.  “Fish show themselves when an enticing lure passes overhead, and you can figure out how to catch them once you know they are there.  While you will see fish in shallow water following your lure, in deep water they will often react to it by striking, and that gives you the same clues.”

Bottom Gear
He tends to use longer rods for his offshore structure fishing; especially with his casting gear.  Fortunately, when he is using the Bottom Walker or the Biffle Bug, he uses the same setup with each; the only difference being the line size.

He chooses a 7’4″ Team Lew’s Football Jig rod that he pairs with a 6.4:1 Tem Lew’s baitcasting reel.  He uses 14 to 16-pound test Blackwater Toray Bawo Superhard Premium Plus Hi-Grade Fluorocarbon line depending upon the water clarity.  For the Biffle Bugging technique, he opts for the same Toray Bawo Superhard Premium Plus Hi-Grade Fluorocarbon, but up sizes it to 16 to 20-pound-test depending on bottom cover.

Of course the dropshot is thrown on spinning gear.  He prefers a stouter rod for casting his drop shot rig, so he uses the 7′ medium-heavy Team Lew’s rod matched with a size 4000 Team Lew’s Gold spinning reel.  He spools that with 16-pound-test Toray Bawo Finesse Braid, then ties a three to four foot leader of Bawo Superhard Premium Plus Hi-Grade Fluorocarbon in five to seven-pound-tests joined by a small swivel.  He ties his dropshot rig with a 1/0 offset shank O’Shaughnessy bend hook; which he 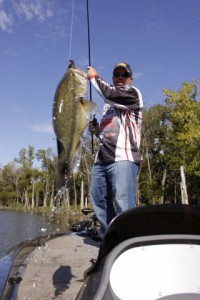 Texas Rigs with his TattleTail Worm, then selects River2Sea Tungsten Skinny Drop weights in 1/4 to 3/8-ounce sizes depending on depth and how fast he wants to move.

Covering Bottom Retrieves
Murray said that his desire is to keep his offerings moving, but keeping in contact in the bottom the majority of the time.  That way he is stirring up silt and causing a commotion that will make bass take notice, even though they may be in a negative mood, or not in the exact area that the lure is moving through.

With the swimbait, he employs a slow retrieve that mixes in some lifting and falling, but only slightly.  The Biffle Bug is a lure he reels steadily, fishing it slowly enough to just keep it in contact with the bottom.  The dropshot is pulled with the rod tip, then the slack is reeled up, and he repeats the motion all the way to the boat; again, keeping it in contact with the bottom.

In the early season, Murray will set up on main lake points and throw across them; starting with the Bottom Walker, then turning to the Biffle Bug, and finally the TattleTail on a dropshot rig.  One thing he is quick to point out is that he tends t fish his lures uphill more this time of the year.

“Bass will sit near a point or suspend over it looking for cold water baitfish to move in towards them,” he said.  “It’s really important to approach from the side of a point, then move up on the shallowest parts and cast out, allow it to sink then retrieve it uphill.  They will often eat better  if the lure moves in that direction because it is more natural this time of the year.”