In today’s modern era of bass fishing, there’s nothing evolving faster than electronics technology. Over the last 15 years we have moved from an era where on-board GPS was a commodity and grayscale five inch screens were the norm, to a time when nearly every jaw-jacking basshead has big-screen color locators at both the bow and console fully equipped with side and down imaging. 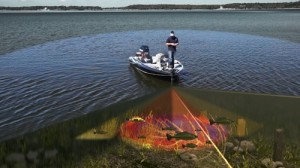 These technologies are amazing and have completely changed the game in ways that we are only just starting to appreciate. You’re seeing anglers routinely win tournaments on offshore structure at lakes they had never been to prior to practice. While younger readers probably don’t appreciate the significance of that observation, old timers can recall when it took years of searching and notebooks filled with shore lineups to fruitfully probe deepwater haunts.

Where does it stop? Surely the advances in side and down imaging have brought us to the apex of underwater imaging technology. Not so fast my friends.

I remember watching intently at media day of the 2011 Bassmaster Classic when Humminbird announced the release of their 360 imaging, a motorized side scanning transducer that rotates a full 360 degrees. At the time, anglers were interested, but in the three years since I can count on one hand the number of time’s I’ve seen one installed on a pro’s boat.

As interesting as the concept of 360 imaging is, and I’m sure that it’s a valuable tool for those that use it, I was never that intrigued by the product itself. That’s probably because the Humminbird technology at the time required a dedicated stern mounted boom for the transducer, added significant weight, and retailed for a hefty $1500. Bottom line, I wasn’t going to order one no matter how interesting the concept was.

My interest then lulled for a couple years, until early 2013 when the fishing community started hearing rumors of Lowrance’s development of a directional scanning technology, to be named SpotlightScan, and which they debuted late 2013.

When I first heard about the SpotlightScan, I was interested. However, the reception of Humminbird’s 360 imaging kept me from getting too excited. Soon though, more data emerged and it became obvious that this was going to be a whole different animal. Details like user control, trolling motor mounting, and plug and play compatibility pushed me over the edge; I needed to learn more about this thing.

What better source of information than Matthew Laster, Associate Product Manager for Navico, Inc. the manufacturer of the Lowrance brand. I was able to sit down with Matthew this week and pick his brain about the SpotlightScan, how it will help you put more fish in the boat, and what the future of sonar technology may look like.

Q: What exactly is SpotlightScan?

ML: SpotlightScan is the industry’s first angler controlled directional scanning sonar. It allows anglers for the first time ever to physically focus their sonar reading in a specific direction. If there’s something out there that you want to look at, point your trolling motor head at it and you’ll get an incredibly detailed reading.

Q: How does it work?

ML: SpotlightScan uses a special transducer containing four specific sonar elements to produce unbelievable images wherever an angler desires. The transducer contains two specific “spotlight” elements, a down scanning element, and the regular 83/200khz Broadband Sounder all in one. It works in concert with a sensor installed in your trolling motor pedal to relay directional data to your HDS Gen2 or HDS Gen2 Touch head unit and give you the clearest sonar image available in the industry. 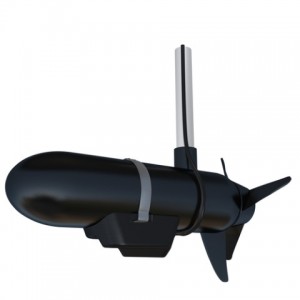 ML: We expect SpotlightScan to be huge benefit to anglers in identifying and analyzing submerged cover. It functions at the same 455/800khz frequency that StructureScan uses to provide almost picture-like images of underwater structure, while being completely user controlled. For example, an angler could specifically look under deepwater docks for brush piles or figure out the best way to fish a point before ever getting on top of it. It will also be huge for ledge fisherman as they will be able to locate and focus on stumps and cover on the ledges just by pointing their trolling motor at it.

Q: What locators is the SpotlightScan Compatible with and how easy is it to install?

ML: The SpotlightScan transducer is compatible with all HDS Gen2 and HDS Gen2 Touch units. The package comes with a transducer and sensor that attaches to your trolling motor pedal. The transducer attaches quickly the same way as any other transducer using hose clamps or aftermarket mounts.

The trolling motor sensor is then installed one of two ways depending on which trolling motor brand you use. I’ve installed several of them on both Minn Kota and Motorguide trolling motors, and it takes less than 45 minutes. Most anglers should easily be able to do the sensor install at home.

Regarding compatibility, the SpotlightScan is designed to be a true plug and play option for HDS Gen2 Touch units, meaning you just swap it out with your current transducer. If you’re running HDS Gen2 units, you’ll also need to install the SonarHub module in addition to the SpotlightScan transducer.

Q: Do you need another transducer on the trolling motor to use traditional sonar?

ML: No, in addition to the SpotlightScan, the transducer also produces DownScan images, and traditional 2D Broadband images. It has everything an electronics savvy angler could need and it’s all packed into a housing that is only 5.75 inches by 3.5 inches, so it won’t affect shallow water performance or trolling motor power.

Q: How much does SpotlightScan cost, and is it available now?

ML: SpotlightScan is available right now from our entire dealer network and it retails for $499 for the transducer kit and bundled with the SonarHub for $999.

Q: What’s next from Lowrance?

ML: We’re always trying to design new technologies that will help anglers put more fish in the boat. One thing that we’re really excited about right now in addition to the SpotlightScan is CHIRP technology, which is a sonar technology that’s actually been around a while, but until now has been prohibitively expensive. 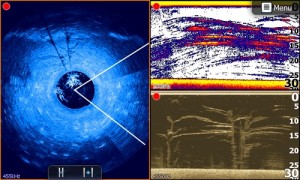 CHIRP technology takes image clarity and target separation to a new level. Essentially, instead of operating at a set frequency like a traditional 50/200khz transducer, CHIRP operates at a range of frequencies, allowing individual targets to emerge with amazing clarity. What used to be a ball of bait on your screen will actually look like a school of fish, and separating targets from the bottom becomes much easier.

We have released the Elite-7 and Elite-5 CHIRP series of locators for 2014, which will bring the CHIRP technology to a much broader group of people. The thing that really sets our system apart is that we’ve gotten CHIRP to work with our existing transducers, so you don’t have to go out and buy a $900 dollar transducer just to use it.