Beyond the Pond – Robin Howell

“I’ve gone fishing thousands of times in my life, and I have never once felt unlucky or poorly paid for those hours on the water.” William Tapply American author

The above notion for a feeling of reward for time spent on the water and desire to spend endless hours fishing is obviously innate in a tournament pro angler.

In the case of Robin Howell, the wife of Elite series pro Randy Howell, the feeling is shared and the relationship of the two has given Mrs. Howell a life that has offered her a taste of all things fishing including blasting off into the water as a tournament pro herself.

In the backdrop of Rocky Mount, North Carolina, the Howells found one another in the setting of their small Christian high school.  Wading through their senior class of 11 peers; the high school sweethearts met in 1988 and married one year post graduation. 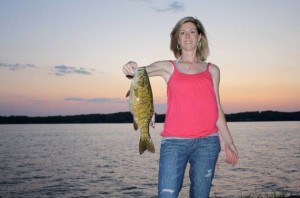 Through their blossoming relationship there was never a doubt in either of their minds that their future would be filled with fishing.  Howell came from a family that owned and operated a Marina on Lake Gaston and also worked as fishing guide.  When her husband set forth to begin fishing Bassmaster Invitationals in 1993, Mrs. Howell knew it was just part of the plan, “I knew from the get-go it was what he wanted to be.”

As her husband set off on his first touring year, Mrs. Howell set off on her own journey with the objective of a college education.  She said that it was an important goal for, “My whole thing was I wanted a degree, no matter what; my grandmother had instilled in me the importance of a degree.”

Upon reaching her educational aspiration the Howell’s contemplated her life on the road with her husband as opposed to getting job with her newly accomplished teaching credential.  The decision was made when Howell took home a tournament victory that blessed them with a Ranger boat.  Mrs. Howell recalled the boon and said, “We sold that boat for as much as I would have earned as salary working for one year.”  Needless to say the money from the sale of their first place prize offered the Howells the prospect to begin their life as a touring family.

Mrs. Howell described the early years of their life with ups and downs and stated, “For four or five years it was tough living on credit and very frugally; there were ups and downs.”  Although their experience may have been somewhat of a financial rollercoaster their lives together on the road gave them opportunity to “share their love of fishing”.

Pre fishing the tournament trail with her husband, Mrs. Howell spent almost as much time on the water as him.  Her days spent in pre practice and her love of the sport evolved into a spot as a tournament pro in the Bass ‘n Gals circuit in 1996.  Demonstrating that angling passion, desire and skill ran deep within the family, Mrs. Howell earned the “Rookie of the Year” title and qualified for the Classic. 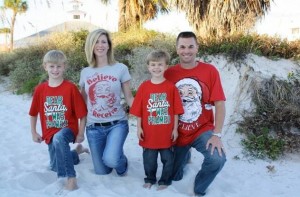 Recalling fondly her own days on the trail, Mrs. Howell stated, “Randy would wait on the bank cheering me on like I do for him now.”  She explained that her time at the front of the boat gave her a perspective and a respect for what her husband goes through as a competitive fisherman saying, “For me, that was a really important aspect of what I took away from that experience and a huge positive for both of us.”

With two years under her belt as pro angler, her husband’s success took a new turn when in 1998 when Howell won his first major event in the FLW on Lake Wheeler.  The win prompted a move from their hometown in North Carolina to Alabama.  Happy about their relocation Mrs. Howell said, “It was definitely a great move for us.”

Never doubting it was their destiny, the Howells took to the traveling life and expanded their family in 2001 when they had their first son Laker followed by their second son Oakley in 2005.  Sharing that the new additions to their family didn’t change their plans Mrs. Howell said, “The idea was he would do this as long as he could financially make enough money to keep us all together.” 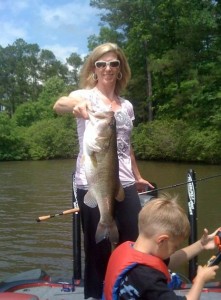 Raising their children on the road and home schooling them has kept the family together through Howell’s career just as they planned.  Mrs. Howell explained, “my teaching degree has come in handy.”  With education a high priority to her, the family teacher explained that the she feels home schooling on the road has “broadened everyone’s horizons”.

She also commented that the experience is enhanced by their home schooling network in Alabama that offers such things as socialization with other home schooled peers and organized extracurricular activities such as dances, sports and yearbook.

Leading the home school classroom isn’t the only hat Mrs. Howell wears and her many tasks are a driving support in her husband’s career that she refers to as a “team business”. Her husband has kept her busy in the fishing business with 21 top-ten Bassmaster finishes and nine Classic qualifications.  She elaborated on the path that her own angling career has taken her saying, “Now my role in the fishing business is behind the scenes; you name, I do it.”

In addition to her role as wife, teacher and business woman, Mrs. Howell focuses on her main aspiration of helping their children grow into “fine gentleman with excellence in their mind”.  She explained, “I seek to expose my boys to as many educational and life opportunities as possible and impart to them a “being great” mindset.”

Mrs. Howell exclaimed she absolutely loves the life that her and her husband’s love of fishing has allowed them to live and passes on the fun of the sport to her kids in the family’s “Bank Classics” fishing competitions.  With thousands of times on the water behind them and the possibility of thousands more to come Mrs. Howell anticipates that the fishing fun will continue long into her and her husband’s future saying, “When the kids are gone, I really see Randy and I following snow birds to warm parts of the country and doing this forever.” 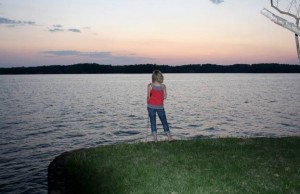