Skeet’s Beat – From the Land of the Rising Sun

I’m back from my whirlwind trip to Japan and I had a great time.

I went to the Osaka Fishing Show with Minoru, my boss from Lucky Craft, to help celebrate the 20th anniversary of the company. It’s hard to believe that Lucky Craft is 20 years old, and that I’ve been a part of the team for almost 15 years of that, but it was really cool to be there for that.

One of the coolest things about the 20-year anniversary was seeing the baits that Lucky craft has released throughout the years. In 20 years Lucky Craft has made 400 production molds for their baits. That means that over 400 different lures have reached the market, and they had them on display, arranged by year that they were released; it was really cool to see that much history in one place. 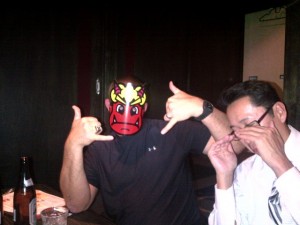 I did two tank demonstrations a day at the show, and I’ve got to admit that it’s not easy to do a tank demo when you have to use a translator. Kentaro from Basser Magazine was my translator, and it took a little bit for us to get synced up. The first one we did wasn’t so good, but they got progressively better as we learned to work on each other’s rhythms.

I saw a lot of really cool and weird new things at the show. I really didn’t spend a lot of time looking at the bass stuff because I was there for Lucky Craft, and I didn’t want to create problems, so I looked at mainly the saltwater stuff. I saw some really cool things, like a surf casting reel from Daiwa that was really big, but only weighed a few ounces; I couldn’t believe how light the reel was for its size.

Lucky Craft had a pretty cool lure with a jerkbait style body without a lip, but it had a spinnerbait like wire that swept down with a little willowleaf blade on it. It still had to treble hooks on it, seemed like it could be a pretty cool little lure.

There was a bunch of Ayu fishing gear there. The hooks are this micro light wire and the rods can be like 30 feet long and cost as much as $30,000. Ayu fishing is an old, traditional sport in Japan, and the gear is taken really seriously.

I got to eat some great food there; the sushi is excellent. I tried all kinds of new things; squid and even fish sperm. Yeah, it was a little weird, but overall the food was great.

I was really encouraged by the turnout. The show had more than 60,000 people come in the three days. Sunday was the busiest, but there were a lot of people there every day. It was a good sign because the area really struggled after the earthquake and the tsunami of last year, and to see it starting to come back is an exciting thing.

I’m exhausted, after two 17 hour plane trips and the time differences, I’m ready for some sleep. It will take me a couple days to recuperate, but I can’t stay down too long. The season is coming up quickly and I’ve still got prep work to do. The Big Rig is all wrapped, and it looks great. My Stratos Elite 210 is at the shop right now, so it should be done soon.

All of it means that the season is approaching; I can’t wait.