Bassmaster Magazine recently featured another illustrious “Day on the Lake” article by Don Wirth in which likeable razorback pro Mike McClelland provided an excellent education on how to lure slow moving bass from 48-degree water with his suspending McStick jerkbait. 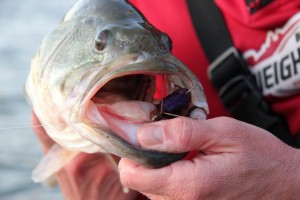 There’s no doubt suspending stickbaits have accounted for tens-of-thousands of tournament winnings when water surface temps are in the 40s throughout America’s heartland. McClelland has certainly sacked up his fair share of coin on the slow moving shad imitators.

McClelland suspects that the inability for most guys to remain patient, in order to pause for as long as 30 to 45 seconds between the twitches of the lure once it’s reached its suspending depth, is the reason many anglers lack success with them.

I’m a universe removed from being a pro; but for 15 years, I’ve tried hard to be more like Mike, and failed miserably. Fact is, I think the famously described “jerk, jerk, pause” cadence would be better described as jerk, jerk, check your Facebook updates, pour a coffee, pause, and then finally, jerk again.

But still I try. I tried as recently as days after Wirth and McClelland’s story published. Water temps were right around 48 degrees; much like those described in the story, and schools of bait appeared suspended off points on my sonar screen. So for two hours I jerked and paused optimistically until hope turned into a desire to jerk, jerk and beat my head against the boat’s fiberglass gunnel.

Amid the annoyance I began to think about alternative cold water baits that might help me get a bite, and wondered what pros like Iaconelli, Biffle and McClelland would do in this frustration filled moment of cold water incompetence.

“If they won’t bite a jerkbait, I throw a Rapala Shad Rap,” said Mike Iaconelli. “The secret is to throw it on spinning tackle because it’s such a lightweight crankbait,” he added. “I use 6-pound fluorocarbon line with my Shad Raps. Try using a 7-foot medium action spinning rod to help you cast it further, and throw it around rocky 45-degree sloped banks; it’s a killer!” exclaimed Iaconelli, a former Toyota Tundra Bassmaster Angler of the Year.

Much to my surprise, famed shallow water jig man Tommy Biffle claimed a long history with suspending jerkbaits, and then offered a modern day means to circumvent them. “I had weighted jerkbaits before anybody else; because Bud Guthrie was my team partner back in the day, and he was the first guy I know of that ever added weight to a jerkbait to make it suspend. I’ve caught a ton of fish on them,” said Biffle.

“The past few years, if they won’t bite a jerkbait, and the water is in the high 40s, I’ll drag a 7/16 ounce Gene Larew Hardhead and Biffle Bug on 20-pound Sunline Shooter Fluorocarbon on gradual sloping rocky banks,” said Biffle. “You don’t need a Flippin’ Stick, I use my lighter weight 6’ 10” rod, paired with a 7.3:1 gear ratio EXO reel to pick up line fast when I feel the bite,” explained Biffle. 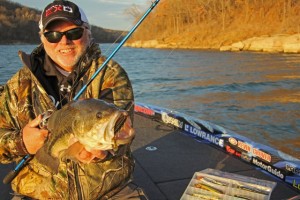 “If the water temp is in the lower 40s, the bass will be deeper, out in that 10-20’ range,” said Biffle. “When they’re deeper like that, I’ll use a heavier, 9/16-ounce Biffle Bug. Mostly, you want to fish around shorelines where the rocks range in size from basketballs to small cars,” described Biffle. “I caught a few yesterday on that pattern,” he grinned confidently from beneath his winter friendly beard.

Finally, I got the courage to admit my failures to McClelland and asked him what lure he chooses when even he can’t catch them on a jerkbait. “Jerkbaits are hard to beat in cold water on sunny and windy days, unless you have aquatic vegetation present; then lipless crankbaits should be a factor around the grass,” said the Boat U.S. Angler member.

“But if the water is in the 40s or low 50s, and they’re not eating suspending baits, that tells me they’re probably on the bottom, and I’ll drag a hula style plastic grub on a1/2-ounce football head jig on 12 to 14 pound line,” explained McClelland; a career long Quantum pro. “Notice I said to drag it. It’s really important that you maintain constant contact with the bottom in cold water if you’re throwing a jig,” concluded the easy-going jerkbait genius.

After two hours of jerkbaiting without a bite (and not yet owning an Alabama Rig to experiment with) I sat down on the front deck, poured a steaming black coffee, and ate half of a crunchy peanut butter and jelly sandwich. I contemplated the cold water options the pros proposed, and chose an old skool version of the ‘bottom draggers’ Biffle and McClelland suggested. I reached for a hair jig, and tipped it with a tiny pork frog. 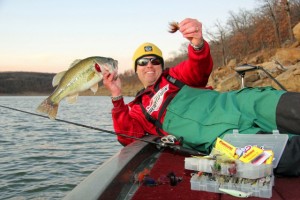 Twenty casts later, I caught my first cold water keeper of the day on the hair jig and pork – a 4 pound, 7 ounce largemouth. 15 minutes after that, another keeper pushing 3-pounds ate my hair and pork combo. The bite was so subtle that a loss of bottom contact was my only indication of a strike, which is why it’s so important to use a lightweight and sensitive rod with a medium heavy blank and a fast action tip — not a heavy action jig rod.

I told Iaconelli of my success with the furry out-of-fashion jig, and naturally, his unbridled enthusiasm came forth. “Yes! Hair and rind does it again,” said Ike, a lover of old skool rap. His words made me believe even stronger that as long as there are hair jigs, peanut butter sandwiches, Biffle Bugs, Hula Grubs and pork frogs – well, then — jerk, jerk, pause may never be me.