Livingston Lures – 2014 Year in Review – First, Biggest and Most

In the case of the eight pros flying the Team Livingston colors, the 2014 season was indeed a case of “first, biggest, most”: the first major championship of the year (Randy Howell’s Bassmaster Classic victory), the biggest (Hank Cherry’s 10-pound, 11-ounce Carhartt Big Bass) and most certainly the most major tournament wins and awards.

Once all was said and done on the 2014 Bassmaster Elite Series and FLW Tour seasons, Livingston pros had claimed the Classic title, the FLW Tour Angler of the Year, the Toyota Bassmaster Rookie of the Year, the Carhartt Big Bass, and 28 Top-30 finishes. Here are the highlights: 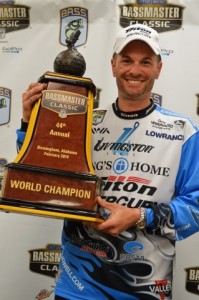 Howell (and the Howeller DMC) claim the Classic

It was a quiet moment that nobody noticed. Day 3 – Championship Sunday – at the 2014 Bassmaster Classic on Lake Guntersville, Alabama. Team Livingston pro Randy Howell sat in the driver’s seat of his King’s Home Triton before takeoff, nonchalantly munching on a banana, apparently without a care in the world.

Entering the day, Howell was 9 pounds back of leader Edwin Evers, in 11th place, with very little chance to win, so maybe it was no surprise when he laughed it off when somebody asked him: “Hey Randy, aren’t bananas bad luck on a boat?”

“Naw, man, I try to eat two bananas a day,” Howell said. “Maybe the potassium and good nutrients in this banana will help me make a comeback and win the Classic.”

It turned out, of course, that Howell would indeed make a comeback for the ages, dropping 29.2 pounds of Tennessee River largemouth on the scales at BJCC Arena in Birmingham and earning the Classic title by 1 pound over Paul Mueller. 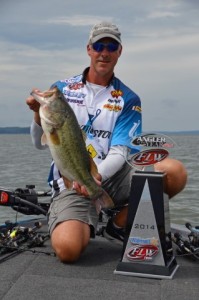 Howell’s banana, though, had nothing to do with his Championship Sunday charge. The amiable Alabamian made Classic history because of a snap decision to fish a different piece of water then he had originally intended that day, and because of a bright-red crawdad-imitating bait that he had never even thrown before. That bait, a prototype medium-diving crankbait that would eventually become the Howeller Dream Master Classic (DMC), was the difference-maker for Howell on a day when the rest of the Championship Sunday field was struggling to get fish to bite on a high-sky day where very little water was running through the reservoir.

“There’s absolutely no doubt that the Electronic Baitfish Sounds (EBS) Technology™ in that bait played a key role in my success that day, because while I was catching fish after fish after fish, the bite was a little off for the 10 other guys fishing the final day,” Howell said.

Following the post-Classic whirlwind of media and special events following his Guntersville miracle and the creation of the Howeller DMC, Howell registered five Top 30 finishes during his Elite season, including a Top 10 on the St. John’s River in Florida (Howell was seventh with 71.12 pounds).

It was one of Howell’s more consistent seasons in his 21-year career and one of the best post-Classic-winning seasons in recent memory.

“It’s hard to try to describe what my year was like in 2014,” Howell said. “It was special and memorable for so many different reasons, but one that I’m really proud of, and blessed to be a part of.”

Morgan, who entered the season as the defending Angler of the Year, made it two in a row by racking up a tour-record 1,132 points and finishing no lower than 22nd in the seven FLW events he fished. Morgan frequently joked about the neck-and-neck competition between himself and eventual second-place finisher Cody Meyer, but it was Meyer who perhaps best summed up how dominant Morgan was in 2014 (and over the course of his career). 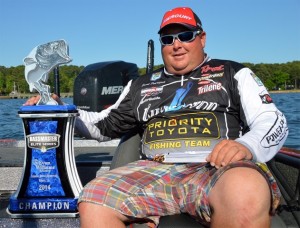 “Andy Morgan is the GOAT: the Greatest of All Time,” Meyer said repeatedly throughout the season. “There’s never been a better angler on the FLW Tour, and there probably never will be.”

JACOB POWROZNIK IS ROOKIE OF THE YEAR, ALMOST AOY
Elite Series newcomer Jacob Powroznik easily won the Elite Series Rookie of the Year award with 723 points – his nearest competitor was Justin Lucas with 638 – but “J-Proz” nearly snuck past Greg Hackney (741) and Todd Faircloth (727) in the Angler of the Year race, too. Powroznik earned a 2015 Classic berth with a victory at Toledo Bend Reservoir in Louisiana (May 1-4), finished fifth at Lake Cayuga in Upstate New York (Aug. 21-24), and weighed in the heaviest three-day limits at the Angler of the Year Championship on the Bays de Noc in Michigan (Sept. 18-22)

“Powroznik has been a force on the FLW Tour for years, it really wasn’t much of a surprise that he did so well on the Elite Series,” said two-time Elite Series AOY Aaron Martens. 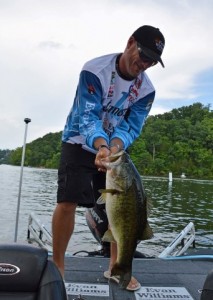 Hank Cherry hoists his 10-11 from BASSFest

HANK CHERRY FINDS BIGGEST BASS OF ELITE SEASON
Hank Cherry zigged when everybody else zagged at BASSFest on Lake Chickamauga, Tennessee (June 10-12). Instead of yo-yoing hair jigs on the deep-offshore community ledges on this impoundment of the Tennessee River as most of the rest of the field did, Cherry stuck to the shallows. The result: a 10-pound, 11-ounce behemoth on Day 2 that ended up being the biggest bass weighed in on the Elite Series schedule for 2014.

“That fish was just one of several big fish I saw shallow that week,” Cherry admitted. “I’m not exactly sure why all those fish were there, but that big fish was up on a bed. Just the way that tournament set up, I felt like I was a couple of bites away from maybe winning that event.”

BLAYLOCK BLASTS THE RECORD
They say there’s no shame in second place, and Stetson Blaylock’s jaw-dropping performance at the May 9-11 Toyota Texas Bass Classic on Lake Fork, Texas proves why. Throughout the course of three record-setting days, Blaylock hammered big bass after big bass after big bass on deep-diving crankbaits (a sunrise chartreuse Dive Master 20 among them), to the tune of 102 pounds, 12 ounces. That easily eclipsed the previous three-day record of 85 pounds, but unfortunately for Blaylock, Texas native Keith Combs wrapped up his third TTBC title with an unheard-of 110 pounds.

“Keith just has that Texas deal figured out, but I’m pretty proud of that tournament,” Blaylock said. “I caught so many fish that went 6, 7, 8 pounds, I can’t even describe it. I would’ve liked to have won that thing, but, man, almost 103 pounds? I’ll never, ever forget that.”

VELVICK’S COMEBACK
After taking the 2013 Elite season off on a medical exemption to rehab after back surgery, Byron Velvick jumped right back into the mix of competition with a ninth-place finish in the first tournament of the year (at Lake Seminole in southern Georgia), thanks mostly to the EBS Technology™  of a “55 Chevy red” Dive Master 14 (Spring Craw).

“I had guys around me at Seminole who were also cranking, but they weren’t throwing baits with EBS Technology™. EBS absolutely made a difference for me – three days into the tournament, I had guys hitting me up for Spring Craw DM 14’s.” 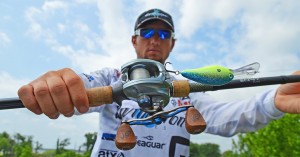 Stetson Blaylock and the Livingston Lures DM 20 from the TTBC

Velvick finished strong with another Top 10 at the Delaware River tournament in Philadelphia in August, capping off a season in which the 15-year B.A.S.S.-tour veteran completely rearranged the way he approached tournaments.

“I really had to relearn the way I fished a four-day tournament, because I had to pay attention to what my body was telling me,” Velvick said. “I couldn’t really grind and grind and grind like I had in the past, and that new approach really allowed me to approach each day with a fresh mind. I really let my gear work for me, too: that ‘55 Chevy Red’ DM 14 was a key bait for me all year.” 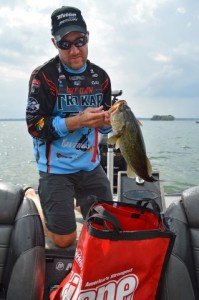 “Cayuga had these giant, vast flats of aquatic vegetation: milfoil, cabbage, coontail, hydrilla,” Chapman said. “It was really hard to pinpoint exactly where the fish were, but those conditions were perfect to utilize EBS Technology™. Those fish could hear both the DM 14 and 20 before they saw it.”

It’s a performance that Chapman views as a springboard to the 2015 Elite season.

“I’m excited about finishing strong, and even more excited about how much a squarebill and deep-diving crankbait will come into play in 2015,” Chapman said. “It’s no secret that I like to crank, so the fact that we’re fishing fisheries like the Sabine River and Guntersville and the California Delta – places where EBS Technology™ and crankbaits in general will make a big difference – is something to look forward to.”

KRIET A CONSISTENT PLAYER
Jeff Kriet was a study in consistency in 2014, finishing in the money in six of the last eight events he fished, and logging the 18th and 19th Top 10 finishes of his career. Kriet was one of only a handful of anglers who sorted out a tricky, mercurial early-spring crankbait pattern on Table Rock Lake in Missouri (April 3-6)  – Kriet finished seventh with 59.5 pounds, only 1.5 pounds out of first place  – followed that up with a Top 10 in the Central Open on the Red River in Louisiana, and put together a Top 20 on the Delaware River.

Kriet was one of three Team Livingston anglers who qualified for the Angler of the Year Championship in Escanaba, MI.