Skeet’s Beat – A Jungle Down There

I just got back from my trip to the Amazon for a peacock bass fishing outing with Roy Halladay, Chris Carpenter and B.J. Ryan. We had my friend John Murray, Ryan McCollough from Wright and McGill Co. and some friends and family members of the players with us too.

The fishing wasnâ€™t great. The water was high from rainstorms, so the fish were scattered into the jungle. But, even though it was tough fishing, we managed to catch some anyway and we had a good time while doing it.

First of all, the Amazon is nothing like I had pictured in my mind. I thought I would be hearing the sounds of birds and animals all day long, but it wasnâ€™t like that. We saw macaws and parrots flying in pairs occasionally, and we heard and saw monkeys, but for the most part, the river was silent, almost eerily silent most of the time. 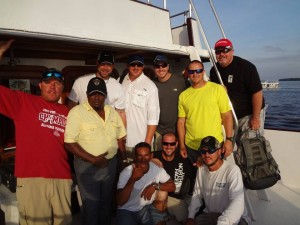 We had plenty of wildlife encounters though. Along with the fishing, we decided to go hunting one night, and Carpenter and B.J. both shot a caiman; which is like an alligator. Me and Doc Halladay even came across a local, sitting bare naked on a tree by the river. What we were able to figure out is that he was fishing in the river for tropical fish to sell for aquariums when he got attacked by an anaconda.

The snake apparently bit him on the ass but he was able to free himself before the snake wrapped him up. Instead the snake wrapped around his motor on the back of his little 14 foot dugout canoe and tore it off the back of his boat. Doc and I helped him gather his gear and flip the boat back over and then towed him home. You could definitely see the bite mark on his ass, but he was able to fight it off; amazing.

McCollough and Carpenter both injured their feet on the trip. Carpenter was moving from one boat to another one afternoon and cracked his toe on the side of the boat; it was all swollen and black and blue the next morning. McCollough actually got stung by a sting ray; which the locals are pretty fearful of, and his foot was really bothering him after that.

While the fishing wasnâ€™t great, we managed to catch a few fish, and some decent ones. The biggest one of the trip ended up being a 15 pounder, but we missed a few over 20 pounds. Halladay even had a Shamu sized one on the last day, but it broke the hooks out of his plug and got away.

The best lure was made right there on the river. It was a hair â€œtypeâ€ jig made from the bark of a tree. Our guides used a machete to strip some bark and tie some of the pulp from a tree to a jig head, making a sort of hair jig. That was the most productive lure there, and if I would have known that, I could have saved myself the trouble of bringing all of those Lucky Craft lures that I brought, and had Murray carry in his suitcase.

All in all, it was an amazing experience; it was pure entertainment with great friends and a bunch of laughter. Iâ€™ll never forget it.