Mark Zona – Get them Fishing

Earlier this month I ran around like James Hetfield at a Metallica concert trying to take care of business at ICAST — the fishing industry’s largest trade show. And last week I was in tune with all that was going on in Little Rock at the Carhartt College Series National Championship, and it’s got me thinking a lot about a term I hear far too often – “growing the sport.”

Here’s the deal. We talk about “growing the sport” – but dudes, we ain’t doing near enough of it. That’s just the fact. Competitive college fishing like the BoatUS Collegiate Bass Fishing Championship and the Carhartt Series are a huge bright star – those trails are vital to the future of this sport, but really man, it’s pretty rare for a person to try fishing for the very first time when they are in college.

You and I both know, that in reality, if kids aren’t introduced to fishing long before they graduate high school, there’s a likelihood they won’t fish once they’re in college.  So don’t ever lose sight of a responsibility all of us that fish have to recruit kids to the sport we love.

I’m not going to beat you over the head with ‘take a kid fishing’ – I’m just going to tell you that instead of fishing one more tournament, or going pre-fishing with a buddy – instead – take a day and introduce a kid to the sport you and I love. 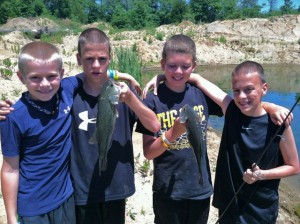 A lot of you know I take my twin boys fishing a bunch, and man, this past week was no different. It’s rare, but I’ve actually been home. And the one thing they want to do is fish. So that’s what we did. And as you can see in the photo, we asked some of their buddies to go with us. I think the picture speaks for itself when I tell you those four knuckleheads will still be fishing when they get to college.

The only bummer in all of it is that my summer is about to end. I know, I realize, it’s only late July, but my August is covered with time away from my little fishing buddies.

I’ll drive more than 45 total hours in August, covering 2,700 miles, as I film new episodes of Zona’s Awesome Fishing Show from Texas to Vermont. And you can bet one thing, I’ll dang sure have my BoatU.S. Angler membership card in my wallet.  Because Z Train loves to take kids fishing, but I’m not into spark plug wires, trailer hubs and socket wrenches.