The last couple weeks have been busy.

I started by heading out to Tulsa for a Dickâ€™s Sporting Goods Grand Opening. The truth is it was three Dickâ€™s stores in the Tulsa area. I was at one, Shaw Grigsby was at another and Mike Iaconelli was at the other.

From what Iâ€™ve been told, they are working on expanding into the west, and Iâ€™m hearing that they are talking about putting 10 or 15 more stores throughout the West; and Iâ€™m proud to be working with them. 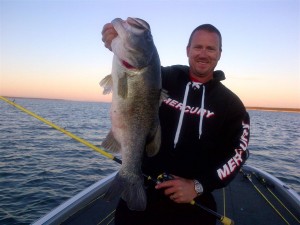 The Grand Opening went well; there were a lot of people that came in despite the heavy winds that came through the area. In fact, when we went outside for me to do my tank demonstration the winds were so heavy that we turned it into a quick deal and we went back inside.

After the Dickâ€™s Grand Opening, I hopped a plane to Del Rio for the first Major League Fishing event. The first event was contested on Lake Amistad, and I thought it was a fun, exciting concept. Iâ€™m really interested to see how the show develops because it will be cool to see how the best anglers in the world break down a lake.

After the event was over, I got the chance to take my dad fishing with me. My dad lives in Del Rio, and I only get to see him so often, so it was really cool to get to spend that kind of time with him. Mike McClelland was there, and he was busy filming some extra things, so I grabbed his Stratos Elite 210 and took dad out for the day.

It was a day for the ages. My first fish of the morning was a fish that weighed right around 10 pounds. I caught it on a Lucky Craft Pointer 100 in Ghost Threadfin Shad color. My dad caught a six pounder and another five pounder and we caught several other fish over four pounds. It was a great day and we had a lot of fun. 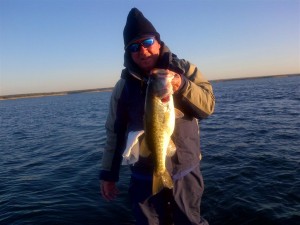 Iâ€™m working with Tom Leogrande from True Image Media this week on filming some promotional clips for my sponsors for use on my website. Iâ€™ve been planning this for a while and it will be nice to get this filmed and produced.

Other than that, weâ€™ll be getting ready to go camping for the Thanksgiving holiday and weâ€™re all looking forward to that.