La Verne, California – When the scales closed on the final day of the FLW Tour season opener on Lake Toho, a trio of Typhoon pro anglers occupied the top three spots. Typhoon pro’s JT Kenney, Scott Canterbury and Wesley Strader topped the field with over 74-pounds of bass each, a full seven pounds ahead of fourth place. Each angler relied heavily on their polarized Typhoon sunglasses in this sight fishing heavy event. 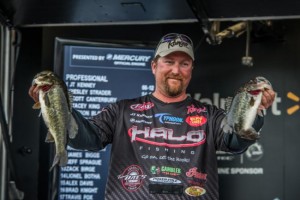 Kenney held on to win the event in wire-to-wire fashion. His first day weight of 29-pounds, 14-ounces was enough to put him at the top of the leaderboard where he remained throughout the event. Kenney, who calls Palm Bay, Florida home, relied largely on his regional knowledge of Florida fishing for his win, “I really don’t fish the Kissimmee chain a lot. When I am home I fish Okeechobee, but I think my understanding of how these Florida bass act, especially this time of year, was the key.”

Kenney focused not on a single spot, but a type of area that he found in different locations throughout the lake, “I was looking for spawning areas. I could see the males on beds, but the females weren’t showing themselves. I’d push into an area and drop my Power-Poles and target isolated arrow heads, reeds and lilly pads with a Gambler Fat Ace. The key was being able to see the targets and hold my location with the Power-Poles. I honestly couldn’t have fished the areas effectively without my Power-Poles holding me in place so I could sit still and let my eyes do the work. I fished the Fat Ace extremely slow on a Trokar TK-135 hook and a 3/8ths ounce Reins Tungsten weight with 17-pound Berkley 100% Fluorocarbon line all rigged on a Halo Daylight series 7’6″ rod.”

Although he wasn’t seeing the fish he caught, he relied heavily on his meridian blue Typhoon Optics lenses to validate bottom composition and scan vegetation. “Being able to see isolated vegetation near thicker hydrilla was important. I was looking for clean bottom composition in those areas.” 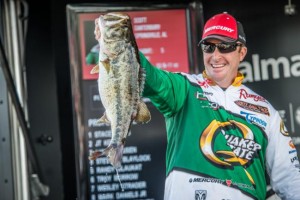 Scott Canterbury
Much like Kenney, Scott Canterbury relied heavily on his vision to find the right areas. Canterbury said, “I was looking for sandy bottom areas. I’d see beds and small bucks. The bigger fish weren’t locked on beds, but they were in the area.”

Canterbury worked a texas rigged Bruiser Baits Stick Worm with a variety of weights. “I used the Stick Worm on 3/16ths, 3/8ths, and 1/2 ounce weights depending on the cover and the current.”

Unlike Kenney, Canterbury wasn’t on much heading into the tournament. “It wasn’t until 11 on the first day of the event that I figured it out. That’s when I put a two good four pounders in the boat and an eight pounder. Day two I went out and repeated it and got the seven and a half pounder.”

On the final day of the event Canterbury abandoned his pattern and went looking for boat docks, an audible that rewarded him with the biggest final day bag weighing 21-pounds, 10-ounces to fall just 11-ounces short of Kenney.

Canterbury’s setup included a Halo Twilight series rod, paired with an Ardent reel, 15-pound P-Line fluorocarbon line. In addition to his tackle, he attributed two key factors to his success, “Power-Poles were a big part of my week and my Typhoon Polarized Optics with sunset brown lenses. Being able to see what I was fishing, and hold my location was a big part of the week,” said Canterbury. 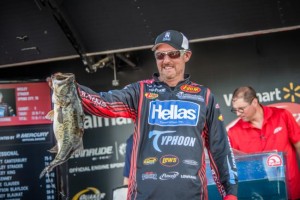 Wesley Strader
For Strader the pattern varied a bit more than it did for his Typhoon team partners. “On day one I focused on spawning beds. The wind and clouds came in on day two, so I switched to a PH Custom Baits prop bait in gold foil with a black back. For days three and four I moved to shell beds and utilized a Yo-Zuri Rattlin’ Vibe in baby bass color to bring most of my fish to the scales,” explained Strader.

Strader offered some pointers to anglers looking for the right pair of sunglasses as they begin sightfishing season.  “The Copper Rose lenses really worked well, especially with the tannic water here in Florida. That played a big role in the success I had during this tournament. Plus, anytime you are bed fishing, you want to eliminate the light coming from around the frame, and the Aloha’s are a perfect fit for that,” explained Strader.

Summary
Make no mistake about it, tournaments in Florida this time of year are visual events. Shallow water with bedding bass turn an angler’s focus off of their electronics and onto their vision. Typhoon Polarized Optics was a key component for all three anglers on their way to the Typhoon Trifecta at Lake Toho.  For more information on Typhoon Polarized Optics please visit TyphoonOptics.com and follow on Facebook at Facebook.com/TyphoonOptics.