Is anyone else sick of hearing about this Alabama Rig? Geeze, yee haw, giddy up, yeah we knowâ€¦Tie on an Alabama Rig and you too can win a tournament! Thereâ€™s absolutely nothing positive from allowing this thing for bass fishing, tournament or meat hunting… itâ€™s all bad. Not faulting anyone for using it and winning a tournament, just to make that perfectly clear. And if they donâ€™t outlaw it, I guess weâ€™ll all have to throw it. Someone needs to start a petition if they havenâ€™t already. I know a thousand people who will sign it. 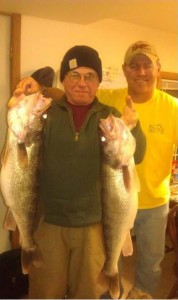 Enough about that. I took my Uncle to a lake not far from home known for small walleyes on Saturday, it was an interesting day. My Uncle Denny doesnâ€™t have the time to fish very often; only about a half dozen times a year, so when we get out we really try to hit everything just right. Well, we were planning on going to the Allegheny River, but that hinged on trapping some creek chubs, which for some unknown reason didnâ€™t work out right. Mitchell and I went to the creek and set two traps the night before. We saw zillions of chubs in the water, but they just didnâ€™t go into the trap over night. Iâ€™ve never seen anything like it. Uncle D and I even went to the store and bought some bread for the traps, went to breakfast for an hour, and checked them again, lolâ€¦no dice!

Without chubs, I made a change in the plans and got on the highway south to Pymatuning. We didnâ€™t get an early start like we planned, but it turned out to be a good move. Uncle D landed two of the biggest walleyes Iâ€™ve ever seen from that lake and Iâ€™ve fished it a long time. We have huge walleyes in Lake Erie, but for Pymatuning it was quite a catch. We ended the night with 4 walleyes and 4 bonus crappies, I will be heading back down there again someday soon for sure.

As for now, Iâ€™ve got a sore throat and cold and as usual, the last one in the family to get it. Iâ€™m sitting here watching the Packers and Vikings on Monday Night Football with a cup of hot tea. I was going to hit the Bay tomorrow, but now I think Iâ€™ll just stay in and get some work done. Iâ€™m working on a new sponsor, which Iâ€™m excited about. Itâ€™s a company outside of the fishing industry and if it all works out, should be a lot of fun next season. I hope to announce some good news within the next week or two.

Have a great week everyone, make sure you head on over to my FB page and like it, Iâ€™m running a contest there where you can win some free tackle and caps!