In Deep with KVD

Kevin VanDam and a Strike King 6XD in warm weather events mean winning. Put the Kalamazoo, Mich. pro on a body of water where the fish are on offshore structure, and a crankbait, and more often than not, the result is a huge payday.

Since the inception of the Bassmaster Elite Series, VanDam and his various crankbait attacks have created a resume of wins and high finishes that could have any tournament angler quaking in their boots. In the past five seasons, VanDam and a deep diving crankbait have been difficult to overcome.

Strike King Lure Company, VanDam’s lure sponsor has done just that, and the result of his knowledge of the technique, Strike King’s desire to craft baits their pro staff needs, and nearly a year of exhaustive testing produced the Strike King Pro Model 6XD crankbait. 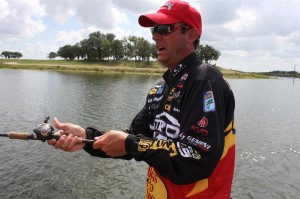 Many baits over the years have claimed to reach the 20 foot depth range, but with line stretch, bait buoyancy and shorter rods, those baits usually reached a maximum depth of around 17 to 18 feet. Even then, those lures often felt similar to rigging a two by four to your line and casting and grinding that all day; it was painful and exhausting.

What also happened with the baits of old was that even when they reached their maximum depth, they were at the apex of their retrieve and therefore beginning to flatten out. When in that attitude they would strike bottom and lose their action, either by stiffly dragging across the bottom, or by deflecting wildly and losing depth; VanDam wanted to change that.

“I was looking for a total performance crankbait,” said the five-time Toyota Tundra Bassmaster Angler of the Year. “I needed a bait to cast farther, get deeper, didn’t over work me, and had the necessary action when it struck bottom; the 6XD is a special bait.”

However, the result didn’t come easily to the pro and the designers at Strike King. “We went through several prototype models to get them just right,” he said. “When I finished second at Kentucky Lake in 2009, I had nine different models; the bodies were the same, but the weight positions were different, and it took us a long time to get that right.”

He said the head designer at Strike King, Phil Marks, has been critical to getting the project right. “Phil is an engineer and understands how air and water pressure affect the action of a lure,” said VanDam. “He is also a pretty good fisherman who understands what we are looking for, and can help us get there, no matter how long it takes.”

His Equipment
As one might think, getting a bait to reach its maximum depth requires the right equipment, and for a crankbait chucker like VanDam, his gear is critical. “I want to get as much distance as possible, and my medium heavy 7’10” Quantum Tour KVD composite cranking rod allows me to make extra long casts and helps fight fatigue of deep diving plugs,” he said. “Because the rod is made of a composite E-Glass and graphite, I can feel everything, but have the give I want when a fish takes the bait.”

His reel is built to maximize the effectiveness of the plug as well. He worked with Quantum to create what he feels is the perfect deep cranking reel; a Tour KVD Cranking Classic Tour KVD Cranking Classic 5.3:1 gear ratio; but he cautions not to think this is a slow reel. “I wanted the power of the lower gear ratio, but didn’t want to sacrifice the speed, so Quantum combined the gear ratio with a spool that holds enough line to pick up 24-inches of line per turn of the handle.” He said it is also a reel designed to handle the pressure of the KVD style of cranking, with bearings that support every vital function in the reel; making them more durable. 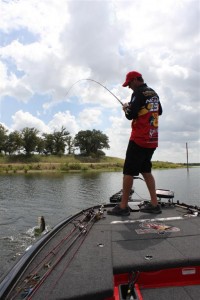 VanDam said that he chooses 12-pound-test Bass Pro Shops XPS Fluorocarbon for the majority of his deep cranking applications, but will go up to 20-pound-test if necessary. “In a hardcore cranking tournament, I typically have six identical rigs setup with line sizes from 12 to 20-pound-test,” he said. “Although the difference in depths between line sizes is not as big as most people think it is. The difference between 12 and 17-pound-test fluorocarbon is only a little more than a foot at the end of a long cast.”

One other component that VanDam feels is critical is upsizing his hooks, and he uses the KVD Elite Series Treble, a hook he helped Mustad develop to increase his hook to land ratio. “I designed the hook with extra strong wire so I could use it with fluorocarbon or braided line, and a short shank so that I could upsize the gap without tangling hooks.” In the case of the 6XD, which comes factory rigged with size two hooks, VanDam often increases two sizes to a 1/0 model if the fish are large enough to accommodate bigger hooks.

Cast and Retrieve
VanDam related that one of the most critical parts of getting the lure to run right is to make the best cast possible. This isn’t too hard when an angler is properly geared up for tossing the 3/4-ounce lure. “I’m able to cast the 6XD as far as 70 yards with a little wind behind me,” said VanDam. “The longer the cast, the more of the lake bottom an angler will be able to cover, so making the long cast is important.”

VanDam lines up isolated shellbeds, rockpiles and stumps to present the lure to, once he finds the cover that is holding bass; he tries to impact the cover. “Making the bait do something different is what triggers strikes,” he said. “Running the 6XD into obstructions and allowing it to deflect off of them is often what triggers strikes.”

What Color When?
VanDam helped Strike King develop the Sexy Shad color a few years ago, and it is still his first choice most of the time. He claims it is a natural color that allows him to target shad eating bass all over the country. However, he does follow it up with a Chartreuse Sexy Shad when the water is a little dirtier. 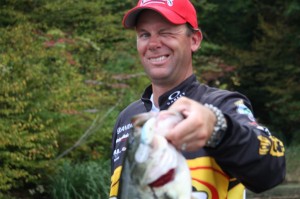 “Most of the time, if I feel I have 15 to 18 feet of light penetration I’ll go with one of those two colors to start with,” he said. “But, if the water is dirtier, I’ll go with a Powder Blue, or Green Back Chartreuse. If its clear water, like at Amistad, then a Green Gizzard Shad is my first choice, and in the spring, I really like a Chartreuse belly Craw color because it appeals to the nature of a bass getting ready to spawn.”