My family got to experience someone elseâ€™s joy yesterday. In fact, we experienced the joy of about 25 other people.

My friend Mark Fisher, Director of Outdoor Sales at Wiley X, my sunglass sponsor volunteers through his church for a group of kids. The kids are from Hayward, Calif., and they all go to a school that the State of California has decided needs to have all of its programs revamped completely.

Some of these kids donâ€™t have the same opportunities as kids we know, and Fisher, and the woman who run this youth group, Ms Lori Campbell spend their own time and money showing these kids love, support, guidance and friendship.

When Fish told Kim and I about what he was doing last year, Kim and I sent them a 10-pound bar of chocolate as a Christmas present last year. When we talked to him at ICAST this past July, and he told me about some of the activities they had been doing; we wanted to get involved.

Yesterday was the day. Kim and I chartered a 50 foot fishing boat out of Emeryville, Calif. on the San Francisco Bay to take 20 of the kids from the group out fishing for the day. Fisher contacted Plano, Okuma, Top Brass Tackle, B.A.S.S. and of course Wiley X, and all of them donated something for the kids to take with them. 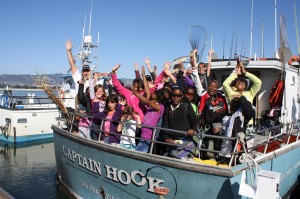 We met up at 7:00 in the morning at the pier, and all loaded up onto the Captain Hook Sportfishing vessel and headed for the Bay. None of these kids had ever been on a boat before, and only a few of them had ever been fishing at all, so it was a real thrill to see them experience the sport.

The fishing wasnâ€™t great, we only caught a few fish, but it didnâ€™t matter. They kids played with the baitfish; the anchovies that the crew got for fishing with were a real hit. Many of the kids spent more time at the bait tank playing with those than they did at the actual rail fishing.

They did manage to catch four halibut, two of them undersized, and had to be released, a keeper striper, a small shark and a little smelt. Everyone that caught a fish said that it was their first that theyâ€™d ever caught, I always love hearing that.

I told the kids that whoever caught the first fish of the morning would get a $20 bill, and it took a little while, but this little boy named Arnez caught a small halibut and we all made a big deal of it. Then we pulled him over for photos with the fish and a trophy ceremony with his twenty dollars.

Later in the day, one of the teachers told us what a struggle it is for families in that neighborhood that has few jobs and so many people looking for work. Then we realized just how much value $20 could haveâ€”or even a tackle bag or pair of sunglassesâ€”things that we might take lightly. That kind of hit all of us hard; including my oldest daughter Lea, who talked about it for a little while on the way home; before she fell asleep that is.

There were a lot of tangled lines, a lot of busy work helping all of the kids with so many rods on the rail of the boat, but in the end it was the amount of smiles that mattered. We would have liked to have them all catch bunches of fish, but when we stopped and realized that these kids had experienced things that would wind up being lifelong memories for them, it was a great day.

To hear many of them say that it was the greatest day of their lives was rewarding, and it made me feel really good inside to be able to do that for them. Honestly, we were just honored to be a part of it; those people are doing great things for those kids.