Blades in the Dirt – with Gerald Swindle

It’s the time of year that bass want to be shallow.  Whether they are up feeding in preparation for the spawn or actually looking for their spawning nest; shallow is the destination.  What that means for bass anglers is that they can slide their trolling motor up; trim up the big motor and go four wheeling for bass. 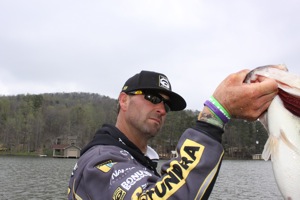 For Warrior, Ala. pro Gerald Swindle; bass in the shallow equals opportunity.  However opportunistic he may be, shallow bass can be very tricky to catch.  Their position in skinny water means they can see everything, hear everything and with that in mind; they are also on alert.

While many anglers would attempt to run into the backwaters with a Flippin’ rod Swindle believes that the best way to catch shallow water bass is to give them some room.  When bass are “in the dirt,” Swindle relies on making longer presentations to avoid spooking bass.

When bass first enter the shallows in the prespawn until they leave for their postspawn recovery, Swindle tries to establish a fish producing pattern in ankle deep water.  But, when bass are spooky, and he can’t get close enough to do a short line battle with them, he turns to an unlikely tool.

Surprisingly, when the bass are so shallow that the waterline would barely reach the alloy on the ATX Series Wheels on his Toyota Tundra; he often turns to a spinnerbait.  “There are times when I need to cover water that some lures are too noisy,” said Swindle.  Those are the times that I turn to a spinnerbait.”

Why a Spinnerbait?
Swindle believes that a spinnerbait is one of the best lures in super shallow water because they present the best combination of stealth and profile.  “Unlike crankbaits, buzzbaits or other topwater plugs, spinnerbaits aren’t really noisy,” said the 11-time Bassmaster Classic qualifier.  “Even though they aren’t overly noisy, they still present a big enough profile to make quality fish strike.”

He also said that the blades on a spinnerbait make the lure a natural for shallow water.  “Blades create lift for a spinnerbait, and that makes the bait ride high in the water when you want it to,” he said.  “They really are perfect for super skinny water.” 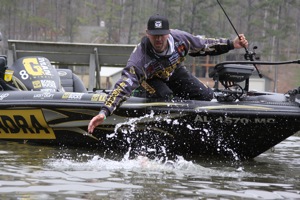 How to
However, he is not limited to only target fishing because of the lure’s inherent strengths.  “I can even use a spinnerbait between targets in shallow water,” he said.  “It gives me a deadly combination of search bait and target lure for drawing reaction strikes as well as locating bass.”

He cautioned anglers to not use a steady retrieve; even in shallow water.  His reasoning is that a stop and go retrieve create a response from predators.  “I kill the bait, even when I’m waking it in super shallow water;” he said.  “I let it pause for a second; let it flutter momentarily, then bring it back up to wake it again.”

While he uses the stop and go retrieve in open water, he employs another technique around cover.  “I really like to bump the cover whenever can,” he said.  “Bumping the cover; whether it’s a stump, a dock, a log or a rock, really makes bass react to the bait.” 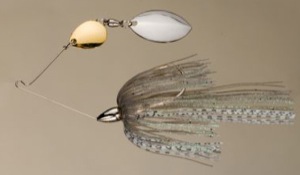 “Spinnerbaits are often overlooked in super shallow water because most people try to throw too heavy of a bait,” Swindle said.  “This particular spinnerbait allows me to make a waking retrieve just under the surface without the noise of a buzzbait.”

In clear water, Swindle chooses translucent shad patterns, smoke colors like Mouse or the Glimmer colors and even Sexy Shad.  However, if the water is dirty, Swindle turns to brighter colors; Hot White and Chartreuse, but he really likes a skirt with bright chartreuse, bright white and a dark blue mixed in.

Blade Gear
Swindle chooses his gear for making multiple casts and covering water efficiently.  For that reason, he prefers gear that is light and responsive. He chooses rods that will give him the ability to make long casts, yet still make precise placement with the lure.

His rod choice is a 7’ medium heavy action Quantum Smoke rod paired with a 6.3:1 Smoke SL100HPT baitcasting reel filled with 15 to 17-pound test Vicious Pro Elite Fluorocarbon line.  The reel, he reports, allows him to keep from working too hard to keep the lure moving up high in the water column; and he said that the lighter line doesn’t overpower the lure in casting or retrieving. 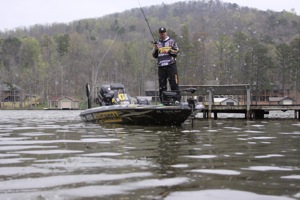 Final Tips
Swindle said another important consideration is to avoid too much stopping and starting of the trolling motor.  He said he likes to keep his MotorGuide on a slow constant speed to keep a steady sound going into the water.

He also said anglers shouldn’t be surprised to find bass shallower than he ever thought possible.  “I’ve caught them so shallow on spinnerbaits that you’d have thought their backs would have had to have been out of the water,” he said.  “Catching them is a matter of trying something different that you’d never thought would work in that instance, and throwing spinnerbaits in the dirt is one of my little tricks to catch ‘em.”