The postspawn period can be boon or bust.

Mornings can be rapid fire action with tired postspawners feeding up on fry around grass and if there is a shad spawn going on; lookout!  The early morning flurry of activity around the shad spawn can be one of the fastest action periods in an angler’s year.  Cast after cast with spinnerbaits, topwaters lipless crankbaits, wakebaits, jerkbaits can produce tremendous results.

Then the sun comes up. 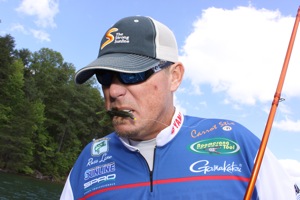 The shad stop splashing around, the fry retreat into the safety of the grass, and the bass that were only moments ago churning the surface of the water into a froth are now sulking near the cover; as is the angler hunting them.

Prattville, Ala. Elite Series pro Russ Lane said that is the time he tends to buckle down and try and grind out a few bites that can finish what he started in the morning with the shad bite pattern; or replace those fish altogether.  His choice for this midday sluggish period is to pick up a Flippin’ Stick and spend the day looking for the big bite in cover.

“Things can happen really quickly in the morning,” he said.  “But, when the sun comes out and the high activity period shuts down; bass will bury up in cover on many lakes, and the best way to catch them is by Flippin’”

Where to Go
While many anglers end up on main lake grass lines for the shad spawn bite, Lane said that turning to the heavy cover bite often means turning a 180 and heading the opposite direction.  “The best place to target flipping fish is in dingy water,” he said.  “The best place to find water with some color to it is the upper third of the river, or the final third of major creek arms.”

Lane said that he prefers to search in creek arms that have the added attraction of additional feeder creeks.  His reasoning is that the more freshwater and ambush points a creek arm has; the more bass it will hold.  However, he doesn’t stop his search there. 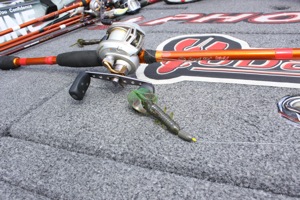 Once he has located creek arms with additional water flow, he searches for flats that have abundant cover.  “I like to find large flats that border the main creek channel or one of the tributaries that have cover on it,” he said.  “Whether that is matted grass, brush, laydowns or docks; I want there to be something that holds the fish in place.”

Weapons
Lane said he has two choices of rods that he uses, and it depends upon the cover he is fishing.  In matted grass he prefers an 8’ extra heavy Carrot Stix Micro Guide rod paired with a 7.1:1 Abu Garcia Revo Premier spooled with 60-pound-test Sunline FX2 Froggin’ and Flippin” braid.  If he is targeting brush, docks or other cover, he goes to a 7’6” heavy action Carrot Stix Micro Guide; the same reel and 22 to 25-pound-test Sunline Shooter Fluorocarbon.

His reasoning for the change in rod lengths has several factors.  The longer rod in matted grass is helpful in turning the fish towards the surface, but the nature of matted grass doesn’t require pinpoint accuracy in most instances.  The shorter rod is best for placing targeted casts around the isolated targets presented by the hard cover. 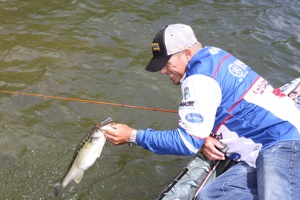 His lure choice is his signature Big Bite Bait Company YoDaddy craw.  He said he designed the lure to be the most versatile flipping bait in his tackle box.  “The YoDaddy is built to handle the 5/0 Gamakatsu straight shank Heavy Cover hook or the 5/0 EWG Superline hook,” he said.  “I use the straight shank in grass with braid, and use the EWG when flipping around cover with Fluorocarbon.”

He also said the bait is compact, but provides plenty of action at slower fall rates.  “I designed it so that the ribs and appendages slide through cover easily; which allows me to use lighter weights,” he said.  “I use darker colors like Hematoma or Black Neon in dirty water and green pumpkin with the claws dipped chartreuse in stained water.”

Have Patience and Be Very, Very Quiet
Lane said that most of the anglers he sees on the water tend to move too fast when Flipping; he said doing the opposite is important.  “When I’ve found the type of water I look for, I know that there are larger concentrations of fish around me,” he said.  “I try to slow down and make each presentation count.  You’re looking for the right bites, not as many as you can catch.’

He also said that anglers make too much noise around cover.  He said that fish can still be spooky, even though they are in cover.  He suggested that anglers run their trolling motor at a slow steady speed to try and keep bass comfortable with the approaching vessel.  His experience tells him that a lot of starting and stopping of the motor is what spooks bass.” 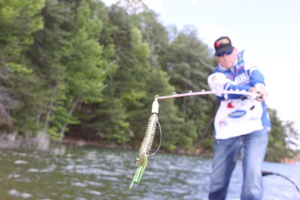 “I’ve seen it when searching for bedding bass,” he revealed.  “They swim away if I stop the motor suddenly, but if I keep it going and make a circle and come back to them; they are usually there; I’ve found the same thing in cover.”

Know When to Flip ‘Em
Finally, Lane said anglers should begin to rely heavily on their Flippin’ Sticks when they are sure that the majority of bass have finished the spawn and are in cover looking to recover from the stress of spawning.  “This can be a great time to really take advantage of their comfort level in cover,” he said.  “I always have them at the ready when I need a few key bites in a tournament this time of year.”