The weekend is over, and it was pretty eventful overall.

I fished with Minoru, my boss from Lucky Craft on Friday. We really didn’t have that great a day as far as the fishing is concerned; we only caught a few, but they were good ones. We had a five pounder, a four and a three; all of them spotted bass. It was fun to hang out with him for a day, away from everything and just be out on the water.

Saturday was cool; I spent the day at the International Sportsman’s Expo show in Sacramento. I got to see a bunch of people I know while walking around the show. It’s always great to see people I haven’t seen in so long, and that happens a lot at a show like that.

The first thing I did at the seminar tank was to take part in the Ultimate Bass Round Table that my friend Kent Brown organizes each year. Kent brings in as many tip level pros as he can, and the fans get to ask us questions, and we all answer them.

The speakers this year were Gary Dobyns, Ish Monroe, John Murray, Cody Meyer and me. It’s always cool to hear what their answers are to the different questions that come up. We even get into friendly little back and forth jousting matches from time to time, which is probably entertaining.

The bass tank basically a big fish tank on a trailer that is brought in for the seminars. On one end is a platform that we speak and cast from. The tank is full of fish that the DFG brings in from the Delta, and oh my God there were some giants in there this year.

I got distracted quite a bit during the round table by all of these five to ten pounders swimming around in the tank. They told us that one of those fish was over 13 pounds. Some of them were starting to get pretty aggressive and roaming around looking for food. There were some little bluegill in there, and I’m surprised any of them made it through the day. 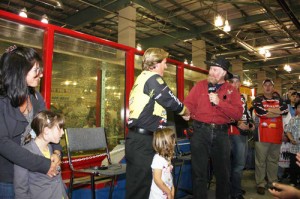 I had a nice honor on Saturday after the round table. San Francisco Chronicle Outdoor Editor Tom Stienstra did a little ceremony for me and announced that I was in the California Outdoors Hall of Fame. I’m not sure how it all came about, but apparently there are only two bass fishermen in there now; Dee Thomas, and myself.

I know this, to have my name and career accomplishments mentioned in the same list as Dee is something I never imagined growing up in the sport. It was pretty cool to hear that.

After the announcement, I did a seminar in the afternoon and gave the attendees some tips from my experience to catch more bass. During the seminar I decided to show a new crankbait I’ve been working on with Lucky Craft, and it snagged a couple of the fish. I had to let one of them swim around for a while before it came off.

Maybe I shouldn’t have, it could have been that 13 pounder. I wonder would that have counted for my personal best if I caught it?