Skeet Reese and his wife Kim live in Auburn, Calif., and their daughters attend school in the nearby bedroom community of Meadow Vista; a city of around 4,000 people on the outskirts of their hometown.  Several years ago, the town began construction on a new community center that would give the town’s children a place to play and learn as well as a center for the town to host events and weddings.

After the majority of the construction was completed, the project was forced to stop because of a shortage of funding.  The Reese’s came up with an idea to host a fundraiser event at the park next to the Community Center.  The park features a playground, softball fields, soccer field; but most importantly – for the Reese’s – a pond. 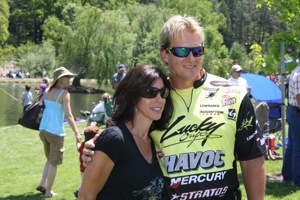 They came up with an idea to host a kids fishing day at the park, and after several months of planning and organization, the event came off without a hitch.  Saturday May 21 arrived and the people of the small community arrived in support of the event, and their community center.

The morning’s festivities received an immediate rush of kids 15 years and under looking to tangle with one of the more than 1200 trout that had been donated by the California Department of Fish and Game.  Along with the DFG plants; which varied in size from planter sized up to three pounds or more, a separate Northern California Hatchery donated 2o rainbows that weighed between four and eight pounds.

While some got to fishing immediately, others took a few minutes to eat the pancake breakfast hosted by the Meadow Vista Lions Club.
The morning’s activities hit a peak between 9:00 and 11:00 AM, when an estimated 1500 people gathered around the pond and throughout the park for the other activities.  Hundreds of anglers lined the banks of the pond hoping to catch their three fish limit of trout on the products donated for the event.

Eagle Claw provided the angles with hooks and tin split shot weights, Berkley provided spools of Trilene XL and plenty of Floating Power Eggs and an assortment of additional bait and tackle provided by Dick’s Sporting Goods.  Wright & McGill Co. also provided rods and reels in the form of Reese’s Junior Champion combos that participants could purchase for a $15 donation to the Community Center.

As the children completed their three trout limit, they could report their catch to the volunteers at the registration tent and collect their trophy for being a participant in the event.  By 12:00 when the official fishing hours ended and fun time commenced; the live band started playing and folks began eating lunch prepared by vendors who set up shop at the park. 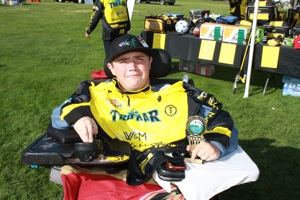 As people ate and listened to the band, kids continued to try their hand at the casting kids booth, and play in the bounce houses, but the magic show also proved to be a big hit, as did the face painting booth.  After a visit to the face painter, kids wandered the park wearing everything from small dolphins on their cheeks to full face paintings of a panda bear.

As the lunch hours wound down, Reese began the live auction for the items that had been donated. The first item up for bid was a handcrafted electric guitar built and donated by the class at Woodshop Rocks, a program that teaches students to not only build their own guitars, but also teams with local music stores to help them learn to play them as well.  The guitar; which had been hand decorated by the students sold for $600.

The next item was an official; tournament worn jersey provided by Reese himself.  The jersey is one of the long sleeve versions he wears on tour during the cooler weather tournaments of the 2011 season.  The Reese jersey is rare, as less than a handful have ever been donated or given out, and the signed item raised $400.

Other items, such as golf outings, fishing trips with guides, a houseboat camping trip, a Nike soccer ball signed by Mia Hamm which was donated by Dick’s Sporting Goods along with a Football signed by a San Diego Chargers lineman and a basket full of goods donated by Mark Zona; the host of Zona’s Awesome Fishing Show raised money for the Community Center. 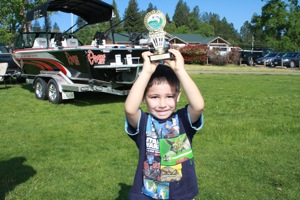 The event received an estimated 2000 attendees and while the total donations are still being tallied; is expected to be several thousand dollars to help complete the Meadow Vista Community Center.  All of the proceeds from the event are going to be transferred to the Community Center, and while the dollars raised appear to be significant; the community received a true gift as its own local celebrity and his family invested themselves even more into their community.

Even with the knowledge of the success of the event, witnessing people come together in support of a cause was a breathtaking experience.  Seeing the friends and family of the Reese’s, local businesspeople and members of the community volunteer by the dozens to spend a day in support of the event was touching.

However, nothing was more stirring than to see fathers, sons, mothers, daughters, brothers and sisters, uncles aunts, grandparents and friends join with each other in the enjoyment of the sport of fishing.  No, there were not hundreds of thousands of dollars on the line; nor were there titles that anyone could put on a resume or an annual report as a bastion of professional excellence. 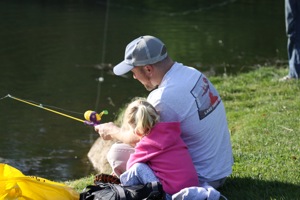 There were however, far more significant prizes that were awarded that day.  The view for anyone in attendance was seeing the smiles and excitement on the faces of the children as many of them caught their first fish of a lifetime.  To see the boys and girls as they received their trophy that simply said “Skeet Reese Kids Fishing Day – Angler;” their eyes wide and mouths agape was enough to remind us of the simple pleasures of youth.

Through all of this, Reese and his family gave their community a gift on Saturday, and even though the day was a success from both an attendance and a fundraising perspective.  They may not realize it just yet, but the gift they gave was even larger; it was a little more of themselves.  They gave the community their hearts, and that was even more moving than any dollar figure could have been.
For more pictures of the event; please visit www.skeetreeseinc.com