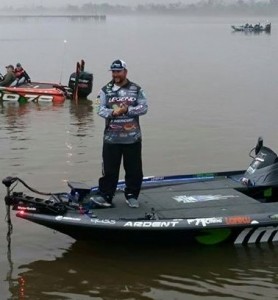 Throughout most of the country, fall is either right on your doorstep or will be shortly. The leaves start to change color and overall temps begin to drop as a transition begins to occur between the heat of summer and the crisp fresh air of fall. There is also a major transition occurring from a fishing standpoint. As water temps drop into the low 60’s turnover occurs.

Though most anglers dread even the mention of the word; for anglers like Bixby, Okla. Pro Fred “Boom Boom” Roumbanis it actually brings shouts of joy at the thought of what’s on the horizon,” Roumbanis said. “There’s a funk, then there is the fun. After that little bit of funk when the lake initially turns over, then comes a period where it’s just on like gangbusters and you can really really catch em good.”

Throughout most of the country turnover occurs between the 60-50 degree range. Roumbanis breaks the transition down like this, “you’ll get a couple nights in a row where it’ll be unusually cold and the water temps will drop below 60 causing the lake to turn over,” he said. When that happens it pushes most of the baitfish up to the shallows and a lot of the bigger fish will follow them up and gorge themselves 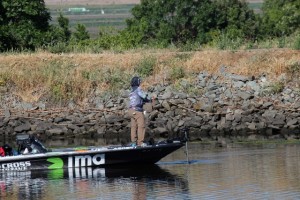 on those baitfish along the bank. When that’s happening it’s probably my favorite time of year.”

Though turnover may begin around that 60-degree mark, Roumbanis was very clear to add that 55 degrees seems to be the peak temperature for finding the most active fish in this pattern. “When I see that water temp hit 55 degrees I get really excited,” he said. “I throw my trolling motor on 50 and it’s time for a buzzbait, spinnerbait and squarebill. I cover water along the bank to find those schools of big shad and have a lot of fun once I do.”

This pattern not only has the benefit of being fun. But in a tournament situation it can help with fish management as well. Roumbanis explains, “I like to find schools on banks where a south wind is flushing the current towards deep water because they tend to replenish,” said Roumbanis.

Those south winds are usually the warmest this time of year and the shad will lock onto those areas. Meaning the bass will generally repopulate the area as you pull them out because the bait is still there. Roumbanis explained his process, “Usually you can roll through an area with one lure, leave it, then come back through again with another and repeat the process throughout the day.” 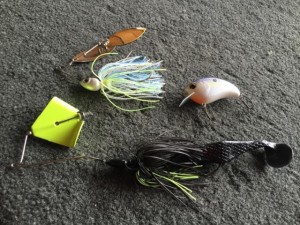 Those lures – A squarebill crankbait designed by Bill Lowen for Ima Lures, Double Willow & Tandem Blade Spinnerbaits by Pepper Custom Baits, along with their The Commando Buzzbait, can be the tools to success this time of year according to Roumbanis. However, I’m willing to bet the simplicity of his gear and color selections also factor.

“I fish my squarebills on a Genesis 2 casting rod by iRod that I designed specifically for throwing a squarebill. It’s called the Crank Launch Jr. It’s a 7 foot 6 inch casting rod with parabolic blank and a soft tip; that allows me to not only work the bait through cover but also aids in hook set and keeping the fish pinned, he said. “For the buzzbait and the spinnerbaits I use another rod in the Genesis 2 series called The Magic Stick. It’s a 7 foot 5 inch casting rod that I designed to basically be the best all-purpose stick on the market and find myself utilizing it for a wide range of techniques these days.”

When it comes to reels Roumbanis selects models from the Apex line of reels by Ardent. “I Fish the Apex Elite in 6.5:1 all the time for the squarebill and most of the time with the spinnerbait,” he said. “For the buzzbait or if the fish are crashing the bait or running towards me I’ll opt for the Apex Grand and its 7.3:1 gear ratio so I can catch up to the fish better.” 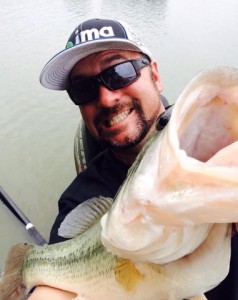 Line choices are equally simple according to Roumbanis, “I throw both the Spinnerbait and buzzbait on 40lb Gliss,” he revealed. “Gliss is a single strand Ardent is distributing that is much thinner and stronger than a traditional braid while maintaining the smoothness of mono. For the squarebill it’s usually 15lb copolymer.”

Following the theme of less is more, it’s no surprise that Roumbanis color suggestions were a simply match the hatch. “Where I’m fishing this time of year it’s usually gizzard shad I’m fishing around. For the squarebill I’ll pick a color like Green Gizzard Shad. For the wire baits I make sure to have White usually with some chartreuse and Shad,” he said. “If the water is somehow stained or it’s a dark cloudy day I’ll throw in some dark colors like black and switch to the tandem blades as well.”

He said the construction of the bait can make a difference. “The thump of the Colorado can be a real difference maker on cloudy days,” he continued, “That being said the overall goal is to match the baitfish in your area; whether it be big herring, chub or golden shiner. Whichever blade combo I’m fishing, I like to fish the ¾-ounce spinnerbait because it has a big profile that mimics those big baitfish in the school which in turn helps me target the largest bass as well.”

Another benefit is stability. “That larger frame will also allow me to upsize the blades and the profile without causing the bait to ride up unintentionally.”

Another small modification Roumbanis makes for this pattern is to his buzzbaits. He said, “I switch all the blades on my buzzbaits to gold. I don’t know what it is, but this time of year I have so much confidence in a gold blade on my buzzbait.”

Combining these three simple bait choices with the right conditions has brought Roumbanis plenty of memories of feeding frenzies, big fish, and tournament success over the years.

Here’s to hoping it can help you get out this year and duplicate those results.