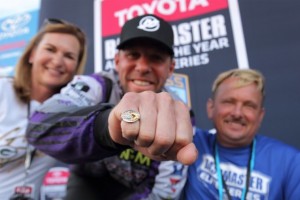 DOOR COUNTY, Wis. — Thrills and heartbreaks were center stage on Championship Sunday at the 2015 Toyota Bassmaster Angler of the Year (AOY) Championship at Sturgeon Bay, Wisconsin. Titles were earned, goals became reality and dreams turned to dust at the final Bassmaster Elite Series event of the year.

Aaron Martens of Leeds, Ala., was crowned 2015 Toyota Bassmaster Angler of the Year and Brent Ehrler of Newport Beach, Calif., wrapped up a very dominant freshman year on the Elite Series and was named Rookie of the Year.

Heartbreak is a big part of this sport, but it is especially pertinent at the AOY Championship. Out of the Top 50, only the Top 40 would earn a berth into the 2016 GEICO Bassmaster Classic presented by GoPro on Oklahoma’s famed Grand Lake O’ the Cherokees.

Following Thursday’s weigh-in, the Top 24 anglers locked in their positions to fish in the Classic next March, but the Classic cutoff is 40th place, meaning 10 anglers would return home disappointed.

“You just can’t have two or three bad tournaments during the season and expect to appear in the Bassmaster Classic,” said Gerald Swindle of Warrior, Ala. “I didn’t catch the fish I needed in Sturgeon Bay to earn my spot. I have nobody to blame but myself. It’s easy to look back through the season and recognize mistakes and bad decisions that put me where I was. In fact, I lost quite a few big fish at Lake Havasu because I was in a hurry and tried to force the issue a few too many times.”

Swindle said that the fish he lost on Havasu cost him a likely Top 50 finish in that event that would have earned him the necessary points to remain above the Top 40 Bassmaster Classic cut. He finished in 43rd.

“I learned a lot — the smallies taught me a lesson again. I love Sturgeon Bay, and I’m definitely coming back next spring to even the score,” he said.

Also missing the cut by just a few points were Mark Menendez of Paducah, Ky., in 41st place, Jonathon VanDam of Kalamazoo, Mich., in 42nd, and Scott Rook of Little Rock, Ark., finished in 44th.

Other anglers benefited from their performance on Sturgeon Bay to move above the proverbial bubble and earn the right to competein the Classic next March.

Brandon Lester of Fayetteville, Tenn., agreed that he’d like a couple do-overs. “I had a great early part of the season, but I think that was mostly because of where we were fishing. I knew those waters and I made good decisions based on my experience and confidence. But, I’ve got a lot to learn about these smallmouth bass.”

Lester was excited to learn that he will be fishing in his second Bassmaster Classic after claiming the 37th spot in AOY points, just three positions beyond the cutoff.

“I’m thankful I caught the right fish at this event,” he said. “Not fishing at the biggest show in bass fishing would have hurt.”

Other anglers who were fighting to make the cut and fished well enough to qualify for the Classic were Billy McCaghren of Mayflower, Ark., in 40th, Michael Iaconelli from Pittsgrove, N.J., in 39th, Brandon Card of Caryville, Tenn., in 38th; and Mark Davis of Mount Ida, Ark., in 36th.

Since the AOY Championship was all about points and a share of the $1 million payout for standings in the AOY rankings, the event did not declare a winner. However, Chris Zaldain of San Jose, Calif., earned 100 points for weighing the heaviest 15 smallmouth bass — a catch of 53 pounds, 4 ounces — of the three days of competition. He climbed to sixth with 616 points, boosting his paycheck for his season’s performance to $30,000.

“All of the bass I caught this week came from a reef littered with large boulders that sat in about 14 to 16 feet of water,” explained Zaldain. “I felt that the fish were kind of spooky, so it was imperative to make long casts with a subtle presentation. I used a small 1/4-ounce round-head jig dressed with a small 3-inch swimbait called a Megabass Spark Shad in an albino pattern.”

Zaldain targeted bass that were feeding on suspended schools of alewives. He claimed the smallmouth were suspended two to three feet beneath the baitfish. “I knew that once I located baitfish and bass on my depthfinder, my next three casts were critical. That approach paid off numerous time throughout the week.”

His primary location was discovered in practice and it produced most of his fish on Thursday and Friday of the tournament. A big weather change and stronger winds on Championship Sunday had the fish few and far between, and he moved to his backup spot where he managed to catch five keeper bass with a Megabass jerkbait.