Fishing the Pre-Spawn with Ben Matsubu 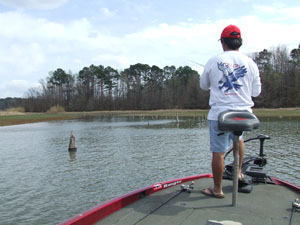 Matsubu was no slouch on the national tours; in a decade competing on the Bassmaster Tournament Trails, the 47-year-old earned $430,000, two wins; one in the 2006 Elite Series Wildcard Qualifier on the Harris Chain, and an Elite Series win in the final event of the 2007 season on the Kissimmee Chain.  His career to date includes a trip to the 2004 Bassmaster Classic and ten top 10 finishes.

For now, Matsubu is content to spend his days on the reservoir that he has called his home for several years, and his days are spent fishing, guiding clients and winning team tournaments.

So, what does Matsubu think about during the springtime?  It’s all about transitions; for the fish, and where he can find them.

Where he Concentrates
Matsubu said that he concentrates his efforts looking for prime spawning and migration routes on Toledo Bend.  “Toledo Bend is full of ditches and drains; especially on the north end of the lake,” he said.  “When those ditches run next to or through a spawning area; that’s where I start to look.”

He also likes to keep in mind that conditions change quickly, and quick changes in the weather can often mean quick moves from big female bas; specially this time of year.  With this in mind, the final consideration for his fishing areas is to find one that has a sloping transition next to it.  “I’ve found that this lake is different than the Western Lakes I started fishing on,” he said.  “They need to have a long, sloping transition into deeper water.  If it’s a steep drop off, the best fish don’t really use them.” He also said that it’s helpful if there is a laydown on that ridge.

The Arsenal
For Matsubu, the prespawn through postspawn period is all about five lures.  When the fish first show up around the ridges, he throws a ½-ounge Talon Lures Custom Weedless Football Jig in some sort of brown an purple color; either cinnamon purple, PB&J or Oxblood II; he adds a five-inch Yamamoto Twin Tail Trailer in 221 (cinnamon purple) color.

Once the water temperature reaches 50-degrees, Matsubu said that the big females begin to make little visits into the drains, especially those that have hydrilla in them.  Those drains may only be slightly deeper than the surrounding water, but it’s enough to help the fish find their way.  He uses two lures for this type of area, and it depends on the water temperature.  “From 50 to 58-degrees it’s all about the Rat-L-Trap here,” he said.  “But, when the water gets above 50, the spinnerbait is best.”

Matsubu then reaches for his 1/4-ounce Talon Lures Shibui Spinnerbait in Copper Shad color, which he throws on 14-pound-test fluorocarbon on a Powell 754 CB Glass rod and 6.3:1 retrieve reel.  “He said the lure casts very well despite the light weight, but that he fishes the bait very slowly.  “I want that bait to just barely tick the tops of the grass,” he said.  “Too many anglers get in too big of a hurry, and they fish over the top of the best fish.” 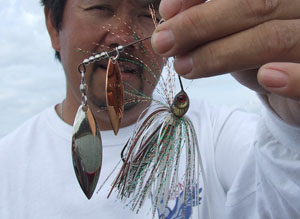 After the water reaches 60 degrees, he said the spinnerbait is still the most effective morning lure, but he adds in a bluegill colored Baby E swimbait as well.  “The swimbait serves two purposes,” he said.  “I can alternate it with the spinnerbait, but it is always ready if I come across a spawning bass to use as a trigger.”

His final lure is a Yamamoto Senko in color 912 (watermelon / green pumpkin laminate); which he uses for cruising bass and for catching spawning fish that have become agitated with the swimbait.

Application Elsewhere
He said that Toledo Bend is a very unique fishery, but that it has helped him when he has been fishing outside of his home region. “Up north, there are parts of this lake that are full of grass, and not much else,” he said.  “I learned here to look for bare spots in the middle of grass beds, and that helped me in Florida.”

He said that the lake has helped him understand that he needs to be ready to apply lessons when he’s traveling, and urges others to do the same. “Whether they’re going across the country, or to a different type of fishery near their home; anglers should pay attention to what’s happening with the fish,” he said.  “Every lake has something that will help them somewhere else, and how fish migrate to and from spawning areas here is similar to other places I’ve been.” 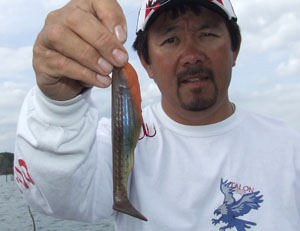 A Helper
More than Matsubu have been benefitting of late from his experience on Toledo Bend.  He said he recently gave a friend of his one of his prized spinnerbaits, and it helped him catch a largemouth over 11 pounds.  “He is a friend of mine from my Arizona days, and he’s doing pretty well out here now,” he said.  “He was struggling a few days ago; so, I gave him one of my Talon Copper Shad spinnerbaits, and he caught an 11 pounder on it.”

The episode has made him talk of a bait that he had kept under wraps until recently.  “The Copper Shad color was one that we made in the Yamamoto Custom Shop several years ago,” he said reluctantly.  “When I couldn’t get it anymore, I talked Talon into making it for me, and they did.  Now that the word is getting out, I’m sure some other companies will want to copy it, so I guess I’ll talk about it now.”

He said the color is one he uses in all water clarities; “There’s good flash from the copper and nickel blades, and the skirt has browns, clears and pearls in it, so it’s a good all around color for slightly stained to dirty water; I just wish I didn’t have to give it up now.”

Matsubu has plans to try and get back to the Bassmaster Central Opens, but he also said he’s content doing what he’s doing now.  “I’m fishing tournaments and teaching people how to fish,” he said.  “I’d like to get back to competing on a bigger stage; we’ll just have to see how things go.”

Elite Visitors Coming
As familiar as he is with Toledo Bend, he is equally familiar with the anglers on the Elite Series, and he says they’ve got an interesting fishery waiting for them when they arrive in the middle of April.  “The lake is about seven feet low; which means that about 50 yards of bank is out of the water,” he said.  “Normally, there is a bunch of brush in the water this time of the year, and flipping can be really good, but I think their event will be won in the ditches, ridges and drains.”
He said that there might still be some spawners to be caught, but that the majority of them will be finished.  “Seventy five percent of them will be done, so the tournament will mostly be won with conventional fishing.”