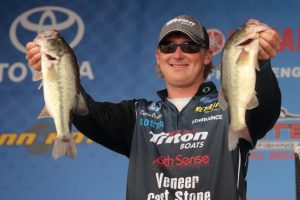 RIDGELAND, Miss. — For the second day in a row, Alabama native Dustin Connell is leading the fourth Bassmaster Elite Series event of his life. The 26-year-old rookie is closing in on his first victory and the $100,000 first-place prize at the Academy Sports + Outdoors Bassmaster Elite at Ross Barnett.

The weather forecast for Ridgeland, Miss., is predicting strong thunderstorms and heavy rain for Championship Sunday, which could impact whether the tournament concludes on schedule or gets postponed until Monday.

Connell’s pattern produced 15 pounds, 7 ounces of largemouth bass for a three-day total of 51-14, which is just over 6 pounds ahead of second place.

“I’m fishing up in the Pearl River,” Connell said. “And if we get heavy rain, the potential flood waters could wash out my spots. If that happens, I may have to revert to plan B and pick up a frog. I’m hoping we’ll dodge a bullet and be able to fish on Sunday.”

Connell mentioned that he’s so confident in his fishing spots that if the weather holds off, he believes he can win.

“I’m trying to not focus on the what if’s right now, rather I’m focusing on what I need to do tomorrow to win, provided we get to fish,” he said. “I have been flipping 35 to 40 spots with lots of vegetation this week. The water in that part of the river is starting to stabilize, and fishing seems to be getting better. If we can avoid the rain, I think I could catch the biggest limit of my week.”

The young angler said he caught 12 or 13 fish during the day, and he missed several big bites that could have added to his lead.

“I’m happy to have a 6-pound lead, which on this lake will go a long way,” he said. “If the weather does hit, a 6-pound cushion will play to my advantage. At the very least, it’ll help me sleep tonight.”

Another Alabamian is also in contention for the win. Keith Poche caught 15-6 on Saturday’s semi-final round, pushing his total to 46-8.

“I really don’t know how this is going to end up,” Poche said. “The forecasted weather is a huge variable. I know I’m around some big fish, maybe even the winning fish, but several inches of rain will definitely change things — and if it does I will be starting over.”

Lester remains in the lead for the Phoenix Boats Big Bass Award thanks to the 7-2 largemouth bass he caught during Thursday’s opening round.

Due to impending weather conditions for Ridgeland, Miss., Bassmaster tournament officials are in regular communication with the National Weather Service. They will make a decision about the final round of competition Saturday evening or early Sunday morning.

According to Bassmaster Elite Series rules, if Championship Sunday is canceled, the tournament will resume on Monday with a projected 6 a.m. CT takeoff and a final weigh-in at 2 p.m.

Connell won the Livingston Lures Day 2 Leader Award of $500 for leading the tournament on Friday’s second day of competition.

The event is hosted by the Ridgeland Tourism Commission.

About B.A.S.S.
B.A.S.S. is the worldwide authority on bass fishing and keeper of the culture of the sport, providing cutting edge content on bass fishing whenever, wherever and however bass fishing fans want to use it. Headquartered in Birmingham, Ala., the 500,000-member organization’s fully integrated media platforms include the industry’s leading magazines (Bassmaster and B.A.S.S. Times), website (Bassmaster.com), television show (The Bassmasters on ESPN2), radio show (Bassmaster Radio), social media programs and events. For more than 45 years, B.A.S.S. has been dedicated to access, conservation and youth fishing.