One of the most important parts of being effective in the springtime is quickly locating active bass. Finding fish that are moving, chasing, and even better; eating, are the kind of fish that can make for a good day.

Many of the country’s best known pros use jerkbaits from the cold water of winter to the early post spawn period.  In cold water, anglers use jerkbaits to make bass strike.  They slowly manipulate a suspending jerkbait, allowing it to pause between twitches, hoping to make a bass mouth the lure as it sits there motionless. 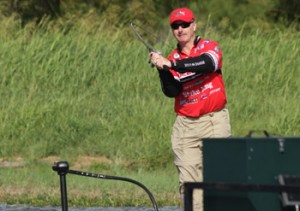 Once the water warms into the mid 50’s, a jerkbait approach becomes much different.  Instead of finessing the lure, anglers in the know make the minnow shaped plug dance in shallow water.   The side to side slashing of the lure creates an instinctive reaction from opportunistic bass.  This more aggressive approach is effective from the period immediately before the spawn to immediately after.

From the moment bass come out of their winter doldrums, to the time they lock onto their beds they have eating on their minds.  They need extra energy for the spawn, the kind of body mass that will sustain them through the rigors of the reproductive process.

These minnow type plugs are so effective at locating bass because they have a very appealing shape, and extremely attractive action that triggers strikes from bass looking to bulk up for the spawn.

One of those anglers is Elite Series pro Mark Menendez of Paducah, Kent.  The winner of three Bassmaster tournaments, Menendez has a love affair with jerkbaits, and he uses them to his advantage.

Jerkbait Water
For the period immediately around the spawn, Menendez tries to find shallow water around spawning areas; if there is some available cover around; that’s even better.  “I look for spawning pockets with stumps, brush or docks in it,” said Menendez.  “I will target the area immediately adjacent to the best spawning area in each pocket, because this is where the biggest females will be staging.” 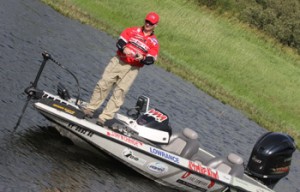 Rather than looking for drinking water clear water, Menendez said he likes a little color in the areas he searches for.  “For this technique, I like to have a little stain to the water,” he revealed.  “The stain makes it harder for the bass to get too good of a look at my lure, and it makes them feel more comfortable as well.”

While heavy grass is not conducive to a long plug with three treble hooks on the belly, Menendez doesn’t mind having some grass edges in the pockets either.  “Grass edges are good places for jerkbaits, they can be really effective to move alongside of and bring the lure parallel to them.”

He said he also prefers that there is some sort of wind on the surface to break up sunlight penetration.  “It doesn’t have to be much, but something to keep the sunlight from penetrating too much is a good thing.”

Equipment and Lure Choice
Menendez uses a 6’6” glass Power Tackle  rod for throwing his jerkbaits, and he pairs it with a Lew’s Speed Spool

Tournament Pro baitcasting reel in a 6.4:1 retrieve speed.  While he might use line as light as 8-pound-test monofilament in clear, cold water, he prefers heavier fluorocarbon in shallow dingy water.  His line size ranges from 12 to 17-pound-test in shallow water.  His rule of thumb on line size is to choose the smallest he can get away with.  “The lighter the line, the more action you get out of a jerkbait, and the aggressive side to side action is what draws strikes this time of year.”

His lure of choice is a Strike King Kevin VanDam Wild Shiner; a 4 3/4” inch minnow shaped plug that comes in a wide variety of colors.  Menendez said that he chooses his colors by water clarity and sky conditions.  “If I’ve got cloudy skies in clean water I prefer a white sided bait, but clean water and a little sun, I go with a clear sided lure,” he said.  “In dinger water, I like baits with more flash, golds and chromes are my first choices here.”

One modification he makes is to change out the hooks on the Wild Shiner.  The lure comes with bronze size five trebles, and he prefers premium hooks.  “I go to a round bend, chemically sharpened treble hook,” he said.  “This bait gets a lot of slashing, slapping type bites, and I want every advantage I can get.”

Retrieve
Once he establishes an area that he would like to target, Menendez said he moves very quickly.  “I’ve got my trolling motor on high, and I’m covering water,” he said.  “I don’t stop and smell the roses with this technique, it’s a get up and go kind of approach.”

Where he will feature soft twitches and long pauses in the cold winter months; that’s not the case here.  “I use harder jerks and shorter pauses in warmer water,” he explained.  “The trick to it is finding out how hard to pull the lure.  Sometimes they want it really snapped, and other times it’s not quite so hard; you’ll just have to experiment to find what works for you.”

Fighting Jerkbait Fish
Menendez said that he takes his time when battling fish hooked on a jerkbait.  The combination of hot fish and treble hooks on a long lure can spell disaster.   “I take my time with them unless they’re heading to cover,” he said.  “I’ll put some pressure on them and try to turn them from cover then, but most of the time I take my time and don’t bring them to the side of my Skeeter too quickly; I want them tired when they get there.” 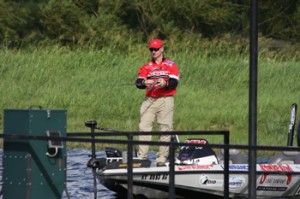 One final thing he suggested for anglers who are beginning to learn how to fight fish on a jerkbait is to pay attention to how the hooks are positioned in the fish’s face.  “A lot of times, they’ll only get one point of a treble hook in their skin,” he said.  When that happens, I try to turn the fish as it gets closer to the boat to try and get another hook in him somewhere.”

He cautioned anglers to practice that move first though.  “It can be tricky to turn a fish with only one hook in it,” he said.  “I suggest anglers practice that move while they’re out fun fishing.  To do it, let the fish swim away from you sideways, then bring the rod back the opposite way crossing the lure in front of the fish and gently pull the fish back towards the boat; a lot of times, you’ll sneak another hook point in there during the fight.”

Final Tips
Menendez also suggested that anglers be aggressive while trying the technique.  ‘It’s spring and the fish are going to be aggressive themselves,” he stated.  “Don’t sit in a pocket too long without any action.  If you aren’t getting bit, move to another pocket; there’s no reason to sit still too long.”