Shallow water, cover, grass and a little wind add up to a solid spinnerbait bite in the pre-spawn timeframe.  However torrid a blade bite can be; it also becomes one of the first bites to shut down when fishing pressure increases. 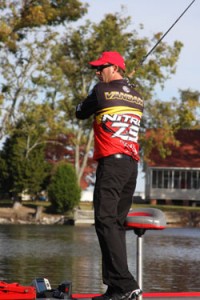 You’ve been in the situation; you’re on your favorite lake and you’re catching them near brush on a spinnerbait.  The water is slightly stained, and there’s a breeze blowing across the bank which is stirring up the mud lines, the phytoplankton and the shad; with all of that, you find bass – good ones.

You return the next day, and start running your pattern again.  Nothing has changed, except that overnight, the water temperature actually increased a little.  Along with the increased water temperature, you also see a larger number of anglers on the water; and a lot of them are throwing a spinnerbait.

You start throwing the blade that made you a hero the day before, but instead of the savage strikes that stopped the bait dead in its tracks, you feel subtle ticks, or bumps as your retrieve the lure.  You wonder if you’ve made any changes; are you retrieving it too fast, too slow, and you try all of the adjustments, but nothing improves.

After a frustrating day of trying to force a spinnerbait bite, you switch to a different tactic, perhaps a Carolina Rig, a jerkbait or even a shaky head.  You catch some fish, but they’re not the quality you had yesterday.  You leave the water perplexed.

Instead of abandoning areas that were good on a blade yesterday, perhaps a lure adjustment was needed.  This sounds like the perfect scenario for a swim jig.  It’s one of the lures that four-time Bassmaster Classic Champion Kevin VanDam has quietly used for many years.

“The swim jig has become one of my best producers over the past several years,” said the Kalamazoo, Mich. pro. “Anytime the fish are up shallow, it is a technique that is on my mind.”

Makeup of a Swim Jig
Swim jigs differ from their bottom bouncing cousins in that they are made with a 28 to 30-degree line tie hook, and a thinner, lighter weedguard.  Where an angler who uses a jig to flip into cover, or a football jig to fish on offshore structure relies on a 60 or 90-degree hook for overhead hooksets; the swim jig is going to require a sweeping hookset. 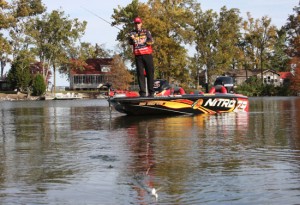 The medium stiff weedguard is built to allow the angler to get quick penetration with the hookset and the medium wire hook is built for the same.

Skirts are similar to any other jig, except for the fact that many swim jigs are baitfish colored as opposed to crawdad imitators.  The choices of swim jigs often include whites, chartreuses, shad and bluegill colors.

The heads are usually shaped like a bullet head, and are designed to keep the line tie, weedguard and hook point in perfect alignment.  A swim jig must have a balanced head; any bit of rolling over, and the jig is prone to hang ups in brushy cover.

VanDam said that his primary trailer for the technique is a Rage Craw.  “For the typical conditions, stained water with some grass, the Rage Craw is the deal,” he said.  “But, if I’m in really clear water, or there is sparse cover, or around floating boat docks, a trailer with less action, like a KVD Chunk is best.”

He tends to use the full size Rage Craw around quality largemouth, but will downsize in a couple of situations.  “If I am in really clear water, or if I am fishing for smallmouth like I do back home, then a Baby Rage Craw is my first choice,” he said.  “I’m trying to present the most appealing presentation to the fish, and I choose the trailer size and action according to the conditions.”

Colors and Size
Most of the time, because he is fishing the jig in shallow water around grass, VanDam prefers to throw a jig that mimics bream.  “I like the bluegill color pith a green pumpkin, watermelon red or Candy Craw colored trailer most of the time,” he said.  “But, I’ll go with black and blue, with a Sapphire Blue trailer in dirty water, or in the fall, or when rising water pushes the shad in the pockets, I’ll go with Sexy Shad and a Pearl colored trailer.” 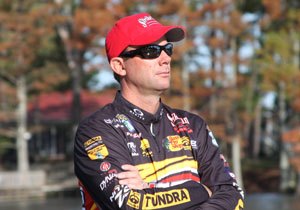 VanDam said that he carries three sizes of swim jigs with him at all times; 1/4, 3/8 and 1/2-ounce are always in the boat.  His first choice is 3/8-ounce, because he can control the depth and speed of the lure for most situations.  “I use the 3/8-ounce for most conditions, because I can throw it shallow and reel it at a pretty steady pace,” he said.  “If I need to slow down and reel the lure over shallow grass or pads, I’ll go to the 1/4-ounce, and if I really need to burn it, or I’m fishing over deep grass, then I’ll go to the 1/2-ounce size.”

Equipment
VanDam said this is a presentation that requires precise casting and speed control.  It is also a reaction presentation, so he doesn’t feel the need to hide the line.  “I try to skip the lure around docks, and under overhanging willows or brush,” he said.  “Even if I am making casts around grass clumps, I want to be precise; so I use a shorter rod for the technique.”

His choice is a 6’10” medium-heavy Quantum Tour KVD with a Tour KVD Burner reel with 7.3:1 retrieve and 50-pound-test braided line.  “The shorter rod helps me place the bait accurately, and because I’m using braided line, I don’t need the extra leverage of the longer rod on a hookset,” VanDam revealed.

Where and How
VanDam said that he looks for areas that bass will want to be for their spawning cycle this time of the year.  “I’m looking for shallow, grassy flats and bays that have a lot of overhead cover in them,” he said.  “It there are a lot of boat docks, willow trees or some other kind of bushes, then I’m in an area that has a chance to produce.” 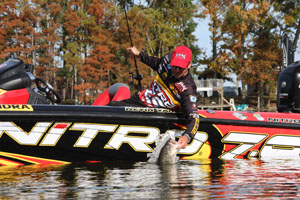 His objective is to place the lure close to the cover and use the surprise of a quality presentation, speed and deflection to create a reaction strike.  ‘I throw this much like I do a spinnerbait,” he said.  “I want the lure to kind of show up in front of them, bang into their cover and make them have to respond.”  He is especially keen on taking advantage of their aggressive nature in the springtime with this type of presentation.

Adjustments
VanDam said that there will be days that a swim jig will produce strikes, but the fish won’t quite take the lure all the way in.  He said those are times that an angler needs to experiment.  “If they are swiping at the lure, or short striking it, I know I need to make an adjustment,” he said.  “The first thing I do is speed up my retrieve a little; if that doesn’t work, then I’ll try a little slower.”

If neither of those changes makes a difference, then he start playing with trailers. “I usually downsize to the Baby Rage Craw, but if they still have the same response, I go to the chuck; it’s just a matter of finding what will make them commit.”

The swim jig is a perfect complement to any anglers’ springtime arsenal.