I Love Cranks – with Mike Iaconelli

He’s written a book about finesse fishing with Bassmaster Senior Writer Steve Price titled Finesse Fishing with Mike Iaconelli.  For goodness sake, he may be the only living professional bass angler to catch a bass in the Louisiana Delta with a spinning rod; which is what he did to close out his 2003 Bassmaster Classic title. 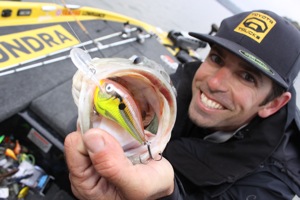 Iaconelli is a devotee of light line angling.  However, it may come as a surprise to even the most ardent students of the game that Ike has an addiction that does not include flossy fishing line and Berkley Finesse worms.  So consumed by the addiction is he that he keeps boxes of his obsession as near as he can in his Bass Cat at all times.

“I confess; I am addicted to crankbaits,” said the 38-year-old New Jersey pro.  “I can’t get enough of them; they are all over my boat and my truck; in storage bins and boxes.  New ones, old ones, factory finished and custom painted models; I love cranks.”

Iaconelli is so convinced of the effectiveness of the lipped, diving plugs that he stores at least nine Plano 3700 and 3730 boxes of them in the front of his Puma FTD.  So in love with them is he that he carries even more than that tucked away in the locked tackle storage of his Toyota Tundra.

My name is Michael, and I’m addicted to crankbaits; would be ap per po coming from his lips at a 12 step program for tackle junkies.  Since his time spent fishing as a youngster, Iaconelli has been a fan of the crankbaits.  “There’s something about the crankbait,” he said.  “There’s a mystique about them, and they’ve had my attention since I was a kid.” 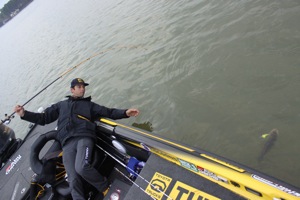 However; the addiction to crankbaits is not irrational.   “Crankbaits are the best baits I know for finding bass quickly,” said the 2006 Toyota Tundra Bassmaster Angler of the Year.  “I have them tied on every time I go out on the water for practice, and if they’re not on the deck during a tournament; they’re usually close by.”

Year Round Search
The six-time B.A.S.S. winner may have started using crankbaits because of their lore; however, and pro worth his weight in championship trophies is not likely to stick with a technique because it looks pretty.  “I’ve been out here full time for more than 12 years now, and I can tell you that they work year round,” he said.  “There is a slow period right in the dead of the coldest part of the winter, and even then, you can still catch a few on it.”

The amount of differences in baits from different manufacturers provide him with a lure that will be effective in most any instance; and that is precisely why he carries more than five to six hundred lures in his boat.  “I have to factor the conditions and the seasonal patterns into choosing baits to throw,” he said.  “There are a lot of variables, depth, wiggle, roll and color all come into play; finding the right combination is what makes the difference.”

Crankbaits provide the angler ability to cover water effectively, and in short time frames locate fish.  “I don’t believe there’s a better lure for locating fish,” he said.  “I use them in every tournament to locate fish; which is important when we only have two and a half days to figure out a lake that’s 50,000 acres before a derby starts.” 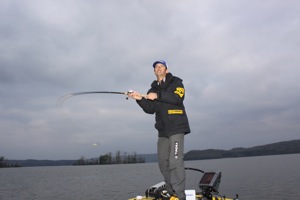 Where to Start
Iaconelli breaks it down by the seasonal pattern, the water temperature and the activity level of the fish, and he tries to pick a crankbait that fills the need.  The two factors he considers primarily are diving depth and the wobble.

In the prespawn period, Iaconelli looks for areas that bass will use on their way to spawning coves.  In the early part of the prespawn phase, that means bass will often position on the primary point of spawning coves outside deep water.   ‘I look for main points first and then secondary points next,” he said.  “Finding a lure that reaches the bass that will reach the bass at the depth they are using.  If they are in 15 feet, then I’ll want to use a bait that at least reaches that depth, if not run a little deeper than it”

His secondary consideration is the side to side action of the crankbait.  A bait with a tighter wiggle is more likely to draw a reaction from bass in cool water, while a bait with a wider wobble is likely to attract bass in warmer water.

Examples of early season choices would be the original Shad Rap from Rapala or a flat sided crankbait.  As the prespawn phase approaches, he turns to the Rapala DT Series of baits; which has a little wider action.  Then as summer arrives, and bass start becoming more aggressive; he turns to a bit with a wider action and more noise like the new Rapala Crankin’ Raps.

His one exception to the rule is when he is fishing the bluff lakes of the Midwest; he won’t be found without a Storm Wiggle Wart tied on.  “There’s something about the way that a Wiggle Wart kind of hunts in it’s track that drives fish crazy in any water temperature,” he said.  “Fish on Ozark Lakes really respond to that action, even in the coldest parts of the year.” 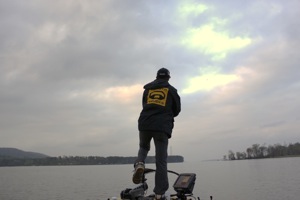 “In the past, 20 foot divers would barely reach that depth before swinging up to the boat again,” he said.  “Now, with the addition of fluorocarbon line and long rods specifically made for big crankbaits, the lures are in the strike zone longer; and that makes them more efficient.”

The key is to get the lure to its depth and be able to move the lure through that depth for a longer period of time than before.  It may seem trivial to some, but Iaconelli said that having an eight foot composite rod will launch the bait as much as 30 feet further which translates into the bait getting into the strike zone faster, and keep it there longer.

While he has been using composite Fenwick rods lately, he said that he is in the process of working with Abu Garcia on a series of composite crankbait rods that will feature moderate actions and lighter tips that will whip the lure further, then when he employs an Abu Garcia Revo Premier 6.4:1 retrieve reel and Berkley’s 8 to 14-pound test 100% Fluorocarbon line (depending on needed depth and cover) he has all the equipment he needs 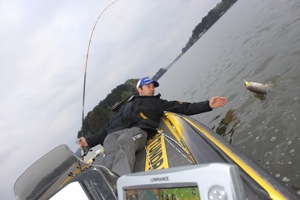 Colors
Even though he carries more than 600 plugs in his boat, Iaconelli said that he keeps his lure colors fairly simple overall.  “My colors really fit in to three categories,” he said.  “I have shad colors, bluegill colors and crawfish colors; they all fit into one of those categories.”

His shad, or baitfish colors will feature hues of chromes, pearls or whites.  Bluegill patterns will be chartreuse, blues, greens and yellow, and his crawfish patterns will be browns, greens, red and oranges.  His colors selection depends first on matching the hatch.  “It’s kind of an old fly fishing deal to match the hatch, but it’s what I do,” he said.  “I start by figuring out what they are eating, then let water color dictate the actual color I throw.”

Families
He suggested that anglers become familiar with a manufacturer’s lures throughout an entire line of lures.  “No matter what brand you choose, it’s important to carry all of the baits in their line,” he said.  “That way, no matter how the fish move, you have a similar action and color to capitalize on their activity.”

For Iaconelli, that means when bass are on the primary or secondary points when they are approaching to spawn, he will start with a Rapala DT 20 or DT 16.  Then as they move shallower into the back of the creeks; he will transition to the DT 14, the DT 10and eventually to the DT 4 when they get into the backs of the creeks on the flats. 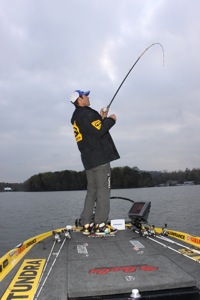 “No matter what manufacturer you choose, you need to have all of those baits ready if you want to be successful,” he opined.  “This will allow you to catch them at every point of their migration.”

Wrapping it Up
Crankbaits have played a major role in two of his biggest Bassmaster wins; his 2006 win on Lake Guntersville, and his 2002 on Lake Seminole.  Both events featured a crankbait as a primary pattern for the event.  “In both events I was ripping a plug through deep grass,” he said.  “The lure would bog down in the grass, and I would rip it free; that’s when strikes would happen.”

He said the final thing is that most of his strikes occur when the lure changes directions.  “When the lure strikes something and deflects is when 90-percent of my strikes happen,” he said.  “It’s important to try and bang the lure of rocks, stumps or whatever is on the bottom.  If there’s nothing to bounce it off of, use a stop and go retrieve, or pop the rod tip occasionally; that will help trigger strikes.”

So, if you listen to Mike Iaconelli, and try his approach; it won’t be too long before you to are seeking professional help for your crankbait addiction as well.