The end of the 2005 season and the beginning of the 2006 tournament season saw the birth of a new lure category; the vibrating jig.

Word started spreading quietly about a lure that anglers were using to catch big bass and win tournaments; the lure was called a Chatterbait.  The bait was basically a skirted jig with a unique blade attached to the front.  The blade would shake back and forth putting flash and vibration into the water. 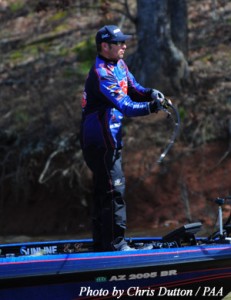 When FLW Tour pro Bryan Thrift, of Shelby, N.C. won a Stren Series event on Lake Okeechobee with the lure; the talk got a little louder.  Then, when Virginia based Bassmaster Elite Series pro Rick Morris used the lure to finish second in the 2006 Bassmaster Classic; the talk became a roar.

The lures became almost impossible to get; and as simplistic the design was, other manufacturers began making their own versions.  One of them was a small Southern California lure maker; Phenix Lure Company.  The Phenix vibrating jig became the favorite of FLW Tour Pro Brett Hite; ironically from Phoenix, Ariz.

Hite set the bass fishing world afire in 2008 when he won the first FLW Tour event at the Kissimmee Chain in Florida; he then travelled more than 3000 miles to the left coast and won the first FLW Series National Guard Western Division season opener ten days later on the California Delta.

The two wins earned him $250,000 and they both came on a Green Pumpkin Phenix Vibrating jig paired with a matching five-inch Gary Yamamoto Swim Senko.

Prior to his wins, the category had become known as a lure that would produce quick, solid limits; however anglers had not found a lot of success catching big bass on the lure.  Hite disproved that thought in winning those two events; his winning weight in Florida was 67 pounds, 7 ounces, and he blistered the field in California with 106 pounds, 11 ounces.

Hite’s victories brought event more credibility to the category and in doing so, showed a new way to employ the lure.  However, despite those heavyweight performances; the vibrating jig remains a retail success in pockets around the country.

He has teamed with Phenix to produce a signature Brett Hite Power Swim Jig. However it is received by everyday anglers, the vibrating jig box is one that rarely leaves the boat of some of the sport’s biggest names, and for Hite, it has became his go-to presentation at just about any body of water across the country.

Prime Time
Hite uses his Power Swim Jig for most of the year; however, he said the best time use the lure is from the prespawn period through the summer.  “I really like it when bass are up on spawning flats with grass all the way through the summer when bass are around shallow cover,” he said.  “I truly believe it is the best grass lure I’ve ever used, and one that will catch any size bass.” 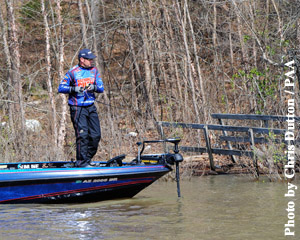 That’s not to say that it’s a lure he reserves strictly for fishing around grass.  He said it is an effective lure in any type of water; from super shallow dirty water to clear deep water around floating cover or steep walls.  “I’ve caught them around steeper walls at Lake Mead, to the bowl type lakes in Florida,” he said. “It really is a very versatile lure.”

What Makes Them Effective
Hite revealed the reason his Power Swim Jig approach is so effective is because it acts a lot like the wooden squarebills of old.  “The lure really darts back and forth in a retrieve like wooden squarebill crankbaits do,” he said.  “It has a very natural, erratic action that makes fish think it’s alive.”

Along with the erratic side to side action, the lure vibrates like a lipless crankbait and combines the flash of a spinnerbait in a much more compact package.  Vibration has always been attractive to bass, and the flash of the metallic blade pulls fish to the lure as well.

Equipment
While many anglers across the country view vibrating jigs as big rod approach, Hite said that he prefers to think of them as a reaction lure and uses an entirely different class of tackle to throw them on.  While many anglers like stout rods and braided line; Hite makes a different choice.

“I prefer to use a glass rod, and I have for as long as I’ve been throwing vibrating jigs,” Hite revealed.  “These are moving baits that fish strike aggressively, and I like the rod to have a little give to it when fish strike.”  His love of glass rods  has led him to work with his sponsor Evergreen to begin working with him on a prototype vibrating jig rod.  The rod is a 7’4” medium-heavy action with strong backbone and a light tip for casting.

He pairs his rod with an Abu Garcia Revo Premier 6.4:1 retrieve speed that is spooled with 20-pound-test Sunline FC Sniper Fluorocarbon.  While many of his Sunline teammates prefer Shooter, FC Sniper is a little bit limper; which Hite said has better handling on the reel. 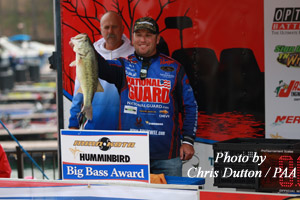 Colors and Trailers
Because he is looking to mimic one of two baitfish, Hite chooses his colors and trailers with that in mind.  “In my mind there are shad, or bluegill imitators,” he said.  “I think big bass eat bluegill at every lake across the country, so I throw a green pumpkin based color almost everywhere.”

His first choice is a color called B-Hite’s Delight, which is heavy on the green pumpkin with a little pearl and chartreuse thrown in.  His second choice; when he believes the bass are chasing shad is a new color called GP Shad.  This is a color based on shad patterned skirt material, but has a few strands of green pumpkin mixed in.

He uses a pearl or shad colored pattern as a trailer on GP Shad, and chooses green pumpkin with th tail dipped chartreuse for the B-Hite Delights color.  His first choice of trailer type is the Yamamoto Swim Senko.  For average sized fish he chooses the four-inch size; but, if he is at a lake with larger than average fish, he opts for the five-inch version.

Whenever his lure buries in the grass; Hite said he pops the rod sharply to make the lure break free from the clump.  “That’s when most of the strikes happen; when I jerk it free from the grass,” he said.  “I believe it looks like a bluegill that is frightened by the presence of a bass, and tries to flee.  That is a really natural presentation to bass.” 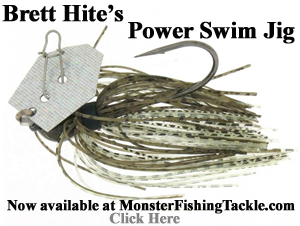 He did caution to be careful when retrieving a vibrating jig around wood.  He said they are prone to hanging in wood cover more than a spinnerbait because it doesn’t have the safety pin wire frame to keep it from hanging up.  With that in mind, it is still important to blanket hard cover to try and draw strikes.  He suggested that anglers retrieve the bait as close to cover as possible; from as many angles possible, to trigger strikes.

Wrapping it Up
Hite said the lure is one that he has come to rely on, and that it works on waterways across the country regardless of the cover.  “I fish vibrating jigs in grass, around docks, big boulders, mudlines, and bluff walls,” said Hite.  “It really is a versatile presentation that catches winning bass everywhere; anywhere I would throw a squarebill crankbait is where I’ll throw this; but this gets bigger bites because of the sizes: it’s become my go-to lure.”