For the most part, swimbaits have received the reputation as giant lures used by giant weirdo’s from the left coast to catch freaky bass that eat trout and act more like striper than they do largemouth.  Let’s be perfectly clear; they are.  Swimbaits are the 12 to 14-inch monster baits that require an angler to spend copious amounts of time in the gym pumping iron in order to throw them over the course of a day. 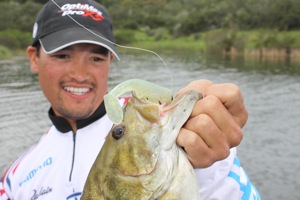 However; they are more than the tennis show lure as they have been described.  After wins on the major tours by Steve Kennedy, Todd Faircloth, Jason Williamson, Byron Velvick and Skeet Reese; swimbaits have gone mainstream, and they are now global.

For the savvy and aggressive angler, swimbaits are a subtle way to increase the size of your catch when other anglers are pounding the banks with noisy lures.  For B.A.S.S. Central Open pro Chris Zaldain from San Jose, Calif., they have become a go to lure; just about anywhere he goes across the country.

Zaldain’s resume is impressive.  For an angler who really only became known in the industry in the past four years; he has made his mark.  He fished four full seasons on the FLW Series National Guard Western Division, Zaldain logged five top 10 finishes, season long rankings of ninth, 23rd, 18th and 10th in those four seasons.  He also made three trips to the Forrest Wood Cup; and he has earned a total of $163,073 in that time.

These days, Zaldain is hoping to take his place on the Bassmaster Elite Series, and is attempting to qualify for the sport’s biggest stage through the Bassmaster Central Opens.  The 26-year-old gave himself a good start when he finished the season opening event of 2011 at Lake Lewisville in 7th place. 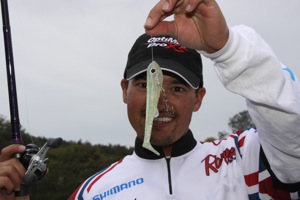 Much of his career success has come on swimbaits.

“I used to be one of those guys throwing giant baits for trophies, but that’s not my focus anymore,” said Zaldain.  “Now, swimbaits have become a lure I rely on for catching quality bass on lakes everywhere; they give me a subtle alternative to crankbaits and spinnerbaits.”

The Replacement Lure
Any time that bass are relating to shallow targets, Zaldain believes they are prone to strike a swimbait.  When the bulk of the anglers in the field are running bank with spinnerbaits, lipless crankbaits and squarebilled cranks; the California pro feels at home with a swimmer.

“I throw them in much the same areas that I would any of those other baits, but swimbaits tend to be a little more subtle,” he said.  “They’re not as loud, they have  very natural; lifelike appearance, and they generate bites.”

He said that he used the swimbait at his first Central Open event at Lake Lewisville; a lake he’s never been on before, and gives it the sole credit for his high finish.

Lewisville Swimmers
Armed with a 5-inch Top Shelf Magnum Deep Runner in SoCal Special color, Zaldain looked for windy points leading into spawning coves.  When he found the combination he was looking for, he lobbed his baitfish imitator and swam it over the top of obstructions.

“I would see guys go through areas with crankbaits and spinnerbaits and be able to catch fish behind them,” he said.  “The swimbait has such a lifelike appeal that bass strike it; when they can see it.”

Optimal Swimbait Conditions
In the spring of the year, the California pro said he starts looking at the first point leading into spawning bays and moves towards the back of the coves until he runs into the fish.  The reason is he knows that bass are going to be leaving their winter haunts and heading into the bays looking to spawn.

Zaldain said he looks for several things when deciding to commit to the swimmer.  The water must have some visibility, it needs to have some sort of cover in the area he’s targeting, and it absolutely must have some wind blowing.

“It doesn’t need to be heavy winds, but it needs to have some,” he said.  “If I’ve got a breeze and water with two feet or more visibility with some cover mixed in; I can catch them on a swimbait.”

Everyman’s Swimbait
Of his Top Shelf Tackle swimbait, Zaldain said that they are perfect for every area of the country because they are not overpowering in their size, and they do not require special tackle considerations to throw them.

Zaldain chooses to throw his swimbaits on gear that most anglers would consider standard for casting jigs or big worms.  His rod of choice is a 7’3” medium-heavy extra fast Power 734cef with a Shimano Curado 201 E7 reel and 15-pound-test Seaguar Invizx Fluorocarbon line.

“The 5-inch lure doesn’t require special gear and it’s a lure that I can throw all day without overworking myself,” he said.

“The lighter line keeps from robbing the action of the lure, but has enough strength to land even big fish fairly easily.”

Swimbait Tips
Zaldain recommends that anglers think of a swimbait in terms of a jerkbait when setting their frame of mind for throwing the lures.  He said that swimbaits are at their best when anglers retrieve them just out of sight to the naked eye; which is usually above the fish.  “In most situations I want the lure to swim above their heads so that they are looking up at the lure against the sky,” Zaldain said.  “It’s a very visual lure; which makes it more like a jerkbait than any other lure category.”

He said that it is important to make precise presentations with the lure and to make sure to cover all of the angles of a particular piece of cover.  Whether the target is a stump, a laydown log or a dock; he claims it is imperative that anglers blanket the cover with the lure. 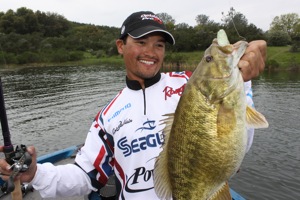 He did say to be careful about bumping cover with the bait.  “This isn’t a hardbait that has a diving lip to deflect off cover, or a spinnerbait that’s made to collide with objects,” he said.  “A swimbait is a soft bodied lure with a giant treble hook on the belly; it is prone to getting hung up, which you want to avoid doing if you want to maximize opportunities for getting bites.”

He also suggested that anglers try to stay in the trolling motor and cover as much water as they can with the lure.  He recommended that anglers keep the motor on a steady speed to avoid the starting and stopping that comes from stepping on the pedal.

He also said hitting a lot of spots through the day is key.  “Stay moving, cast to as many ambush spots as you can, and you should run into the fish,” he said.  It’s a more widely applicable lure than most people give it credit for being, and it doesn’t have to be a foot long to catch quality fish.”