Getting to Know Mark Melnyk of WFN

World Fishing Network (WFN) has brought the fishing industry some of our fastest rising personalities. While many of them were known throughout Canada, they hadn’t become household names in the U.S. until WFN opened its doors several years ago.

Savvy industry personnel knew the name of Bob Izumi; who built a name as the top fishing personality in Canada throughout his career; but WFN introduced us to others that have become well known. The most obvious one was Dave Mercer, who hosts his own show Facts of Fishing, and in 2011 became the emcee for the Bassmaster Elite Series. 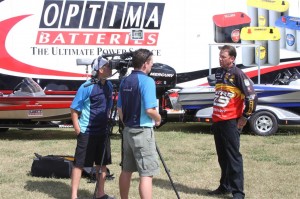 But, there are others who have also made their mark, and Mark Melnyk (pronounced Mell – Nick) is one of them. Melnyk has a diverse background in television, but as a lifelong angler, the opportunity to work at WFN has proven to be a dream come true.

He started out interviewing pros for a podcast on WFN’s website. His first podcast was with Scott Suggs after he won the 2007 Forrest Wood Cup, becoming the first man to win $1-million in a fishing tournament. But, it wasn’t long before he was on the road working in the field and filming his own shows.

Melnyk is currently the host of WFN’s Reel Fishy Jobs, a show that takes him to areas all over North America to meet fishing industry people and perform the jobs they do every day. While filming Reel Fishy Jobs, Melnyk has made chum, worked with shark researchers and helped fish hatcheries breed redfish and speckled trout. He has filmed himself competing in an FLW Series event on Lake Champlain, and he has even gone noodling for catfish in Kentucky.

While he has spent the last five and a half years at WFN, he helped launch the Discovery Channel and Animal Planet in Canada, then worked at the Outdoor Life Network on their Western Lifestyle programming; which included bull riding and rodeo broadcasting.

However, WFN provided him the place he really felt at home – around fishing. “I have fished since I was a young kid,” said Melnyk. “I was the 12-year-old who had saved up to buy 10 fishing rods; I’ve always loved to fish.”

What He Loves
“I love to fish!” Melnyk exclaimed as he tried to illustrate why he loves his job so much. “I don’t care what species it is, I love to fish for anything that swims,” he said. “Any time that I can get on the water, I want to fish.”
He said he has a real passion for what he calls “Mega Fish,” giant fish that can break tackle and hearts. “I’d love to do a show about big fish,” he said. “I really would love to catch one of those giant marlin; whether it’s for a show or not.”

With that being said, being from Canada, Melnyk really loves to fish for smallmouth bass. “I think smallmouth are the best fighting freshwater fish for their size,” he said. “Their never say die battles are really exciting, and there are many lakes around here that I can target smallmouth bass.” 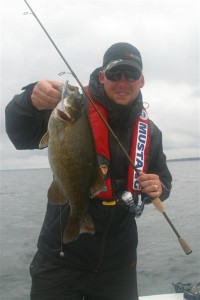 Melnyk is an avowed reaction bait angler for smallmouth. “There’s nothing like the strike of a smallmouth bass on a spinnerbait,” he said. “When they come up and crush a spinnerbait, it makes my heart leap.” He also loves to throw topwater baits and is beginning to love the subtle nuances of crankbait fishing.
While he loves churning and burning for smallmouth, Melnyk is learning how to apply more subtle tactics when he needs to. He applied some of those on a recent trip to Lake Simcoe, the largest lake in southern Ontario, about an hour outside of Toronto.

Cold and Wet
Melnyk said that the weather that greeted he and his friend Patrick Walsh was less than favorable for a guy who likes to burn spinnerbaits. “It was cold and rainy,” he said. “The air temperature was 38 to 40-degrees and the wind was blowing 15MPH; I wasn’t going to be catching them on a reaction bait.”
So, he located a hump that topped out in 25 feet of water and turned to a dropshot rig. “The key here is that smallmouth usually hold on the steeper side of a hump, and they hold off the edge,” he said. “When the bait; whether its emerald shines, perch or gobies get on the edge of that structure; the smallmouth go crazy.”

He and Walsh used two different baits; a Berkley Gulp Saltwater Flats Worm and an XZone Lures Slammer to tempt the fish. One thing that they had to do was lengthen the leader of their rigs to keep the gobies from biting the worms. “We ended up using pretty long leaders; say 18 inches or so,” he said. “Before that, we caught some that managed to bite our lures; we even caught one that was longer than a soda can.”

Respect for the Pros
Like so many people in the industry, Melnyk had aspirations of fishing on the pro tours, and he even took a shot at it as a part of his show. “I entered the FLW Series tournament on Lake Champlain a few years ago,” he said. “Scott Martin, who had won on the lake before was my coach for the event.”

Melnyk finished the first day in 50th place; in position to cash a check. But, as happens in bass fishing tournaments, the weather changed and his pattern did as well; he finished in 128th place after three days. “It was tough, but Scott (Martin) told me he thought I had what it took to run with the big boys,” said Melnyk with a chuckle. “But, some people have suggested that he may have been trying to keep me in the field paying entry fees to increase the payback. I don’t know about that, but I had fun trying it once.” 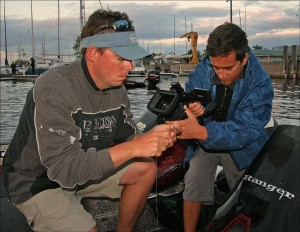 Partnerships
Melnyk works hard to keep his television show completely unbiased when it comes to presenting the story of industry companies. But, he has met with companies along the way that respect his commitment to the industry, and have chosen to build a relationship with him.

He works with a company called alltackle.com, where he “gets all of his gear for going on his fishing outings.” He also has found a close friendship with the folks at Vicious Fishing, and he uses all of their line when he is on the water.

He also recently formed a partnership with Sundog Eyewear to develop a signature line of fishing glasses. “I really like innovative products, and Sundog put some real thought into their lenses,” he said. “Their MelaLens technology incorporates melanin into the lens and they block harmful light and are the clearest lenses I’ve ever worn.

“I’m grateful to my friends and partners and everyone that has helped my Reel Fishy Jobs what it is.”