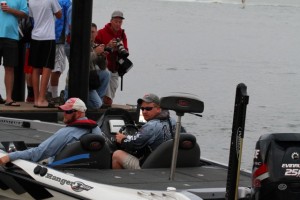 Imagine qualifying for the most prestigious tournament in the FLW Outdoors family; the Forrest Wood cup.  Now, imagine doing it with only two weeks left of pre-practice time before the lake goes off limits.  Now, further imagine that you have a weeklong trip with family planned for one of the two weeks on a few days after you qualify.

Pretty scary huh?  Scary and exciting all at the same time.

That’s where Bono, ark. angler Kerry Milner found himself after winning the BFL All American on June 29.  he said he had three days before he went on a week’s vacation with his family to Florida, and he spent those days driving around each of the three pools of the Red River.  he went on vacation with his family, then immediately returned to the Red River for a week before off limits.

“My wife was getting a little aggravated with me while we were on vacation; because I wasn’t really on vacation,” he said.  “My mind was on the Red River, and trying to put a plan together to be competitive.  So, I was a little distracted to say the least.”

His family returned from vacation Saturday night at midnight, and he was gone the next morning at 8:00AM to spend a week 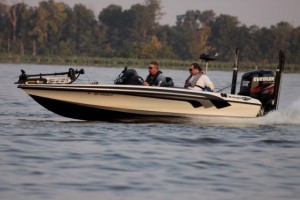 practicing the lake.  His goal was to not only to try and be competitive, but he also needed to see if he could do well enough to compete on the tour level, because he was considering moving up to the tour level. The effort earned him a fourth place finish, and a decision to move up to the FLW Tour level in 2014.

In his seven days of practice before the waterway went off limits, Milner said he found three areas that he felt would be the most productive during the tournament.  He was aided in his search by using an old technology.  “I got an old paper map that marked where the original sloughs and ponds were on the River,” he said.  “That helped me find areas that had deep water in them that were more likely to hold fish.”

Feeling that having deep water nearby would be key, Milner decided to focus on three main areas in pool five that he felt gave him the best potential.  “I chose White House, the back of McDade and No Dredge Lake,” he said.  “I had a little area about a quarter mile past No Dredge that had some decent limit fish, but those areas would be my main areas to target.” 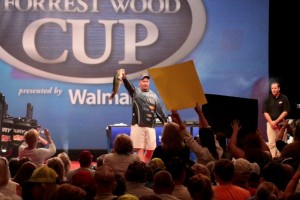 Day One
He decided to hit his little area on the river to try and get a quick limit in order to take the edge off the nerves on the first morning. “The idle into the back of McDade was a long one, and I didn’t want to miss the early morning bite,” he said.  “I caught a limit in the first hour that weighed around eight pounds, then went to No Dredge Lake.”

No Dredge was full of competitors that would wind up in the top five on day one, so he made the move to McDade.  After idling through, he spent the rest of the day Flippin’ a full sized Zoom Brush Hog; but he came up empty.  he said he knew the fish were there, but he just could not get a bite in there.

He came to the scales with his original limit from the first hour of the morning; which weighed 8 pounds, 15 ounces, and he found himself mired at the bottom end of the 46 angler field. 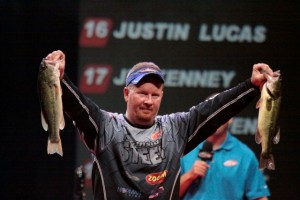 Day Two
He started on the river again and caught another quick limit to start the second day.  He then made the decision to head to McDade in search of the quality fish he had found in practice.  His first pass through with the Flippin’ rod produced nothing; so he adjusted.

“I knew those fish were still there, I just had to figure out how to make them bite,” he said.  “I picked up a spinning rod with a Shaky Head and Zoom Trick Worm hoping to get a bite or two.”  He did.

he spent the rest of the day in McDade, and was able to cull up  his limit to 12 pounds, 4 ounces and moved all the way up to 15th place to make the cut to fish on day three with a total of 21 pounds, 3 ounces.

Day Three
He had intended to make the run all the way back into McDade first thing in the morning on day three, but when he was making the run, he turned off at White House.  “I just had a feeling that I needed to hit some of those areas that had deeper water in it,” he said.  “I picked up a frog and started catching some good ones right away.”

That kept him locked into the frog bite in White House until almost noon.  He left there midday with an 11-poud, 10-ounce limit; which pushed his total weight to 32 pounds, 13 ounces and moved him to 7th place. 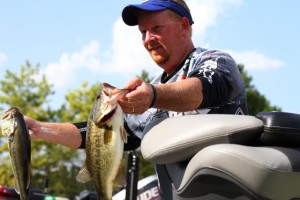 Day Four
He committed himself to White House again for the final day, but also told competitor Larry Nixon that he was going to leave certain parts of the area alone so that Nixon could fish as he needed to.  “He was in the position to win, and it was all I could do to make sure he knew that the area belonged to him,” he said.  “He had some key areas that had logs and grass that I had found on the, but with his career, and the fact he was in position to win, I decided to stay off of them.”

What he did instead was target little troughs that he had located which had deeper water, pads and vegetation bordering them.  He stayed with the frog, spent his entire day in there and ground out another 11-pound-10-ounce limit.  His limit pushed his total weight to 44 pounds, 7 ounces, and moved him to fourth in the final standings.

Turning Point
He said the turning point for him was realizing that the cold front had caused the fish to slow down.  He had been Flipping his Brush Hog and mixing in a swimming a Sloan’s Flipping Jig, but the fish in McDade had really slowed down.  “When I realized that I had to slow down on the second day, it made all the difference for me,” he said.  “By switching to the Shaky Head, I was able to fish in a way that the fish would respond to, and it changed the whole complexion of the tournament for me on day two.” 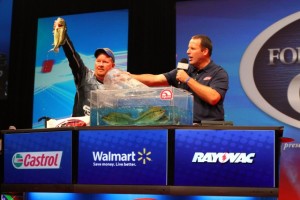 He did break off one fish on day two that may have moved him a couple of places higher in the standings.  He had snagged his shaky head and used his rod tip to free it, apparently loosening the guide ring in the process.  When he set the hook a few moments later on a four pounder, the ring popped loose and his line rubbing on the sharp part of the guide frame broke his line.  “A four pounder wouldn’t have won the tournament for me, but it might have moved me to third or even second,” he said.  “Other than that fish, I fished clean and executed well.”

Equipment
He said he Flipped his first day limit on a Black Neon Brush Hog, then switched to Green Pumpkin Magic when the sun came out strong.  He rigged them both on a 7’4″ heavy action St. Croix Legend Tournament Flippin’ and Pitchin’ rod paired with an old style Shimano Curado and 50-pound-test Power Pro braided line. He used 3/8-ounce Strike King Tour Grade Tungsten sinkers and a 4/0 Gamakatsu Superline EWG hook on his Flippin’ Rig.

His Shaky Head rig consisted of a homemade head with a Watermelon Candy Zoom Trick Worm on a 7′ medium action St. Croix Legend Tournament spinning rod spooled with light fluorocarbon until he broke it on the guide.  He then spooled 20-pound-test Power Pro braided line on his size 2500 Shimano Stradic for fishing around the grass.

he threw his Rainforest Black SPRO Bronzeye jr. frog on the pads and grass with a 7’6″ medium fast St. Croix Legend Tournament rod with the same Shimano Curado he Flipped with.  He matched the technique with 65-pound-test Power Pro braided line.