With approximately five minutes remaining in the event, Iaconelli landed what might be the most famous 3 ½ pound bass in the history of bass fishing.  After seeing the fish miss his Mann’s Swim worm, he followed with a Super Finesse worm which caught the fish that ultimately gave him the win.  What followed that fish introduced the fishing world to “Going Ike;” his signature screaming and the Iaconelli – “Never Give Up!” creed.

Another interesting fact about the 2003 Bassmaster Classic was that Runner up Gary Klein was actually shot at by a homeowner near the water during the competition.    “I was driving my boat south in Bayou Camp Town and a man in a camp on the west side of the bayou was aiming a long gun at our boat,” Klein wrote in a statement to the Plaquemines Parish Sheriff’s Office. “As we passed by, he shot over my boat.” 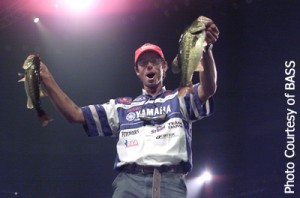 Mike Iaconelli with some of his winning fish on Stage – photo courtesy B.A.S.S.

The Winning Pattern:
Iaconelli focused on one area in the Venice region of the Louisiana Delta.  He reported after the event that he had found the area during the pre-practice period, and returned during the official practice round.  While there, he received multiple bites, which he shook off.

He opened the tournament with a 15-pound, 6-ounce limit which put him in second place behind Mark Menendez, who weighed 16 pounds, 10 ounces to grab the first round lead.

Iaconelli made the long run the second day, and was able to produce an 11-pound, 10-ounce despite losing time due to a mechanical issue in the Gulf of Mexico.  Iaconelli had to turn his focus to catching a limit and turned to a prototype Mann’s Swim worm which he worked quickly around shallow vegetation to pull the fish out within eyesight. He then would use a Super Finesse worm to catch bass that showed themselves.

His 27 pounds for two days had given him the lead with one day left to fish.  However, Davy Hite, who won the 1999 Classic on the Louisiana Delta and Gary Klein a two-time Bassmaster Angler of the year were within three pounds of Iaconelli.

Iaconelli returned to his area on the third and final day.  His area struggled to produce keepers, and he sat on four fish as the final moments of the tournament waned.   With only five minutes until he had to leave, Iaconelli used the finesse worm to catch his final bass, a reported three and half pounder that closed out his limit, and pushed his total weight to 37 pounds, 14 ounces. 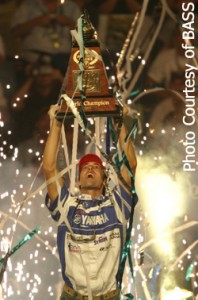 His final weight was enough to close out the victory by 1 pound, 12 ounces over Klein who reported losing a pair of solid fish on the second day of the tournament that may have pushed him over the top in his 21st appearance in the Bassmaster Classic.

In the early stages of the tournament Iaconelli fished many different baits including spinnerbaits, jigs and crankbaits.  As he put it he was, “Almost junk fishing” near aquatic vegetation.  This approach reportedly produced his early results, but after finding the pattern with the two Mann’s worms, he stayed with it.

The baits he used were the Mann’s Stone Jig, Super Finesse Worm and a prototype Swim Worm.  In order to fish the Venice area of the Delta Iaconelli had a two hour one way boat ride to and from the spot.  His fishing time was minimal; he spent almost as long running in the boat as he did actually fishing.  .

The 2003 Classic is memorable for several reasons.  Starting with Iaconelli’s infamous last minute fish, his trademarked scream and his “Never Give Up!” motto; which all became some of the most famous elements of the sport virtually overnight.  Ending with the story of the New Orleans Delta, long runs across the Gulf of Mexico and a competitor, Gary Klein, getting shot at and the 2003 Classic is one that will be hard to forget.