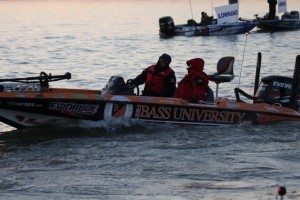 Pete Gluszek has been a touring pro for many years.  He started fishing Bassmaster and FLW events in 1995 and along the way, he has won two B.A.S.S. events, two FLW events, qualified for three Bassmaster Classics and a tip to the Forrest Wood Cup.  He has also managed to cash $600,000 in checks along the way.

These days, aside from still hitting as many bass Pro Shops Bassmaster opens as he can, he operates an instructional guide service and his main occupation is that he partners with lifelong friend Mike Iaconelli in The Bass University, a seminar circuit built around teaching people the great sport of fishing.

Despite his love for competing, Gluszek has found more joy in the teaching than he could ever have imagined.  he pours himself into that endeavor with his whole heart, and it is evident when he takes the podium at The Bass University events.

One of his favorite techniques to teach is what he has named Power Glide Senkos.  It is part of one of the seminars he is teaching this year at Bass University sessions, but he shared it here with us.  While it sounds like it might be a slower technique; but, rest assured, it is not.

This technique was in fact responsible for his 2012 win at the Bass Pro Shops Bassmaster Northern Open at Cayuga Lake in August of 2012.  His win earned him a trip to the 2013 Bassmaster 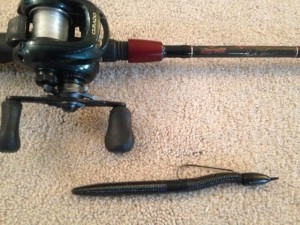 Classic on Grand Lake outside of Tulsa, Okla., but he said it is a technique that he has used many times to finish high in tournaments.

“This is really one of my favorite techniques because it draws strikes, and fish hold on to it allowing me plenty of time to set the hook,” said Gluszek.

We said that the name Gluszek had given the technique made us think that we would be listening to him describe a way to use heavy gear, but that the Senko would lazily meander through the water column.  However, as we listened as he explained the technique, we found that our perception of it was incorrect.

Gluszek’s Power Gliding technique revolves around adding weight, in the form of a shaky style head, or a bullet sinker to the lure, and then allowing to lure to wander aggressively as it falls.  “It’s important to allow this lure to fall on slack line every time,” he said.  “On the cast and when you hop it back up, you have to allow the weight to guide the Senko; it is the key.”

But, let’s begin with where you throw this setup

Where to Go Gliding
Gluszek’s favorite place to throw this is around grass.  Since he cut his teeth fishing in the Northeast,  he has become accustomed to fishing it in a variety of ways, but his favorite is grass.  “We get large fields of matted grass up here in the summertime,” he said.  “I target the edges of that, where the grass starts to taper off.  I believe the baitfish filter into those grass beds at night, and as daylight breaks, the bass wait in ambush for them in the sparse grass; that’s where I love to throw it.” 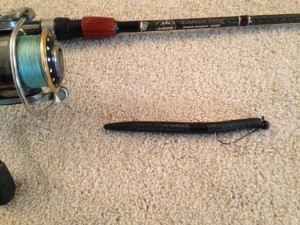 He also said that he has thrown it on gravel and sand bars, around docks and laydown logs, and even standing timber.  “There really isn’t a bad place to throw it,” he said.  “You just have to adjust things to the conditions and let the lure work for you.”

He also suggests that anglers fish this technique in water that is at least five feet deep, because deeper water gives the lure a chance to glide better.

“I like to use an 1/8 to 1/4-ounce Big Bite Baits Fin Twist jighead with the 4/0 hook in it because it fits the Senko well,” he said.  “I use light line with this application and spinning gear.”  He opts for a 7′ medium-heavy Denali Rods Rosewood Shaky Head model, matched with a 2000 or 2500 size spinning reel spooled with 10-pound-test Gamma Torque braid tipped with a leader of Gamma Edge Fluorocarbon in eight to ten-pound-test.

For his heavier applications, he opts for a 7’4″ heavy action Denali Mark Tyler Multipurpose Rod and 7.1:1 Shimano Curado or Chronarch reels spooled with 20-pound-test Gamma Edge Fluorocarbon line.  He threads a 3/8 to 3/4-ounce Browns Valley Tungsten bullet weight on the line, after a bobber stop, he then Texas rigs the Senko on a 4/0 offset shank round bend Gamakatsu hook.

Cast and Retrieve
He prefers not to make super-long casts when fishing around cover, but lets the water clarity dictate distance.  If the water is stained, he can get close; clear, and he backs off a bit. 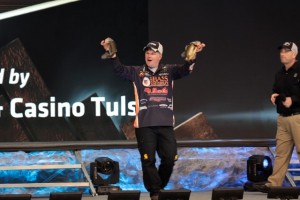 He said it is important to give the lure as much slack as possible the moment it hits the water.  “I make my pitch, or cast and as soon as it hits the water, I drop the rod to put a bunch of slack in the line,” he said.  “Once it hits bottom, I pick up the slack and quiver the line, leaving the bait in place.  If I don’t get a bite, I sharply hop the lure by lifting it as much as four feet, drop slack in the line and let the fall happen all over again, and repeat that until it gets back to the boat.”

He said that anglers need to pay attention, because bites will happen on the fall.  “Watch your line, but don’t forget to leave plenty of slack, so you don’t impede the lure’s action,” he said.  “You will just pick up and the fish will be there.  Set the hook and have fun with the fight.

“I get so much satisfaction from hearing Bass University students and other people come up and tell me that they caught fish on the things we teach them,” he said.  “We just love to help people catch more fish, and that’s what Bass University is all about.”

For more about The Bass University, or to register for a class, visit http://thebassuniversity.com