On Top with Ehrler

Brent Ehrler is an FLW Champion. He is one of the highest ranked anglers in the world, and he has earned his place among the most popular anglers today.
He is also a power fishing junkie.

At first thought, it may not seem logical to label a Southern California based angler as a power fisherman, but the Redlands, Calif. pro loves to keep it moving. Yes, he won the 2006 Forrest Wood Cup in Alabama on Logan Martin Lake on a finesse worm, but he loves reaction baits.

With that in mind, Ehrler loves topwater baits in the fall. 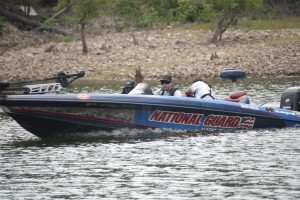 Ehrler has a system that he employs for fall topwater fishing, and his program revolves around having everything at the ready on most bodies of water. “Topwater fishing is something you have to commit to in the fall,” he said. “There are three distinct types of baits that I use and I use them for different settings.

He described one as a search bait, one as a target oriented lure and one for fishing around significant grass.

On the Hunt
Ehrler believes that anglers need to be on the move constantly when they are fishing topwater baits. “Bass move so much in the fall that you never really seem to catch them in the same areas from day to day,” he said. “They can move miles while they are following baitfish, and you have to be able to cover water to find them.”

His primary weapon for this type of approach is the Lucky Craft Gunfish. “It’s one of the most versatile topwater lures on the market,” he said. “It casts a long way, walks really well, and has enough of a popper mouth to make a commotion when I need it to.”

He said his approach with the Gunfish is to turn his trolling motor up and cover a lot of bank moving at a steady clip. But, he is ever prepared for schools of bass chasing bait to erupt near him. In that case he uses the castability of the Gunfish to make long casts, or he responds by donning his life jacket and firing up is Mercury to close the distance quickly.

He said he tosses his Gunfish on a Lucky Craft Sammy Rod, a 6’10” mid power rod that he pairs with an Abu Garcia Revo Premier in a 6.4:1 retrieve speed. He spools his reel with 28-pound-test Sunline Super PE braided line and affixes a 20-pound-test Sunline Super Natural monofilament leader to it.
He revealed that he makes long casts and works the bait at a medium retrieve by snapping his rod tip and making the Gunfish walk the dog.

Target Specific
He also said that he keeps another floating topwater lure at the ready in case he encounters isolated targets along his route. “Single stumps, boulders, laydowns, bushes and doc pilings can be awesome places to find individual fish holding,” he said. “I prefer to have a Lucky Craft G-Splash at the ready so that I can target those and keep the lure in the strike zone longer.” 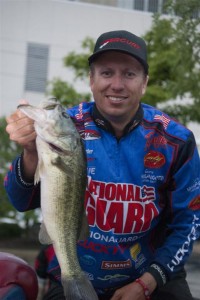 The G-Splash is a typical popping type bait, but because the lure is engineered to exacting Japanese standards, it also walks the dog effectively. “I experiment with the retrieve around those targets,” he said. “I don’t have a hard, fast rule for which to use, but sometimes they prefer a “bloop and pause” retrieve, and other times they want it walking a little more. Either way, the lure stays in the strike zone longer; which makes it more effective around cover.”

He uses the same gear as the Gunfish for the lure, unless he needs to be very precise with his casting, then he opts for the Lucky Craft LVR rod, a 7’medium light action rod.

Grass or Dirty Water
Ehrler said that he has found a buzzbait to be his favorite choice around heavier grass and dingy water. The noise emitted by the metal blade of a buzzbait can pull bass from grassy areas, and those that have some decent stain to it.

In this case, he upgrades to a 7’ mid-heavy TLC Pitching Rod and the same Revo that is spooled with 50-pound-test Sunline FX2 braid. “I think this lure is the best one for pulling fish from heavy grass, or making a commotion in dirty water,” he said. “The buzzbait is really effective, and it will attract big bites.”

He said he starts with an Owner Spinnerbait Trailer hook on the back, unless it gets hung up in the cover too much, then he will go without.
Colors

Ehrler believes in Lucky Craft’s staple of ghost colors for throwing his floating topwaters. “Most of the time the water will have some decent clarity when I am fishing a topwater plug,” he said. “So, I tend to go with Ghost Minnow or Ghost Pearl Minnow most of the time. If I do need to go with a moe solid pattern, I usually turn to the original Chartreuse Shad.”

For buzzbaits, he also chooses to keep it simple. “I use black all of the time,” he revealed. “Unless the bass are heavily feeding on shad, then I will turn to white; I have the most confidence in black.”

Final Tips
Ehrler said that he always changes out the hooks on his topwaters. “Lucky Craft puts really sharp hooks on their baits, but because I like braided line they tend to not be strong enough for the no stretch line,” he said. ‘I upgrade to Owner ST36 Stinger Trebles, they are really sharp and are very strong.” 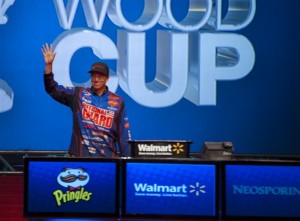 He is also a fan of feathered trebles, and while he will throw a lure without one out of the package occasionally, he usually puts an Owner Tournament Trailer Feathered Treble on the tail hook hanger. “I just really believe that it gives a lifelike feel to the bait,” he said. “I think it draws more strikes.”

Finally, he said to keep moving. Bass are rarely in the same place for very long during the fall, you really have to move around more than you think to take advantage of topwater bites this time of the year.”