Once the spawning period has come to an end and the final wave of bass are leaving their beds anglers have a multitude of techniques they can implore to catch bass. The bass are in a transition phase from shallow water to their deep summer haunts and the fishing can be phenomenal. During this transition, AMP Energy Drink Pro Stetson Blaylock has found success skipping a big jig around docks.
Skipping jigs is an art form. Spend a day in the boat with Stetson Blaylock and you will find yourself doing more watching than fishing; its mesmerizing. Watching a half ounce jig skip across the water with just the slightest of disturbance seems to defy logic, but with enough practice and the right equipment Blaylock is confident any angler can perfect the technique. 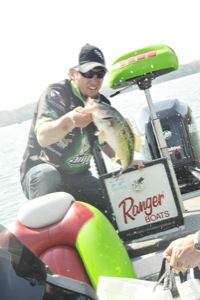 Blaylock, who grew up in the heart of bass fishing country in Benton, Arkansas, is in his third season as an FLW Tour professional. In 2009 he moved up to the front of the boat after many seasons as a top co-angler. He was confident he belonged and set out to prove himself; his “Welcome to the big leagues” moment came in his third event at Lake Norman where he finished atop the standings. In addition to winning the quarter million dollar purse, he also set the record as the youngest angler to ever win a tour level event at only 21 years old. Amidst his third season as a professional he has already amassed two top 20 finishes in three events and is looking forward to the chance of making the Forrest Wood Cup which will be held at his home lake; Lake Ouachita.

Blaylock has an air of old-school to him. His idea of finesse fishing is scaling down his jig to 7/16 ounce and adding a more subtle trailer. A simple philosophy guides his bait selection; big bass like big baits and his first choice is always a jig. When faced with post spawn conditions and a body of water that offers docks as a cover option, he has dialed in his approach of skipping a jig under those docks.

Here’s how he does it.
Blaylock begins his search by finding the largest spawning creeks and understanding which structural aspects they use on their migration to deeper water. Along the way most bass follow ditches or drains and make stops to feed or take cover. He will always start as far back in the creek as he can and works his way out until he gets bit. The first bite will tell him a lot about how far into the post spawn the fish are.

Blaylock offers his explanation on the position of the fish, “post spawn females seek out the nearest cover after the spawn,” he says, “they want to be close to their beds, but in a location where they feel protected and can feed.”  According to Blaylock, boat docks offer that perfect combination and while they are always good places to find bass, the immediate post spawn is when you will catch the biggest bass. With hundreds or sometimes thousands of boat docks on a lake you would have to spend days fishing the boat docks to find the productive ones, and that’s exactly what Stetson does. “I have found more than anything else, the sheer number of docks I fish increases my success rate,” he says, “I can start to pattern fish after a while, but I still see every dock as an opportunity and I don’t want to miss one.” He prefers to fish older, wooden docks but has found some newer docks to have remnants of the replaced structure still looming below; so he doesn’t overlook them.

His methodic approach to each dock starts by positioning his boat where he can best land fish. While his casting proficiency affords him many different angles to skip his jig at, it’s the possibility of hanging a fish up on the poles that forces him to consider how he will get the fish out and back to the boat. He will never pass up an opportunity, but thinking ahead decreases the chances of disaster.

The tackle used for skipping jigs is crucial. Blaylock suggests the following, “First thing you have to do is trust your reel. Lay off the breaks and the spool tension and let the jig fly. Your rod needs to have a fast tip and a lot of back bone to get a whipping motion as you cast.” His gear includes a 7’ 1” Thirteen Fishing rod with an Abu Garcia Revo Premier reel. He opts for 12 pound-test Berkley Trilene 100% fluorocarbon in almost every situation because it has extremely high tensile strength. 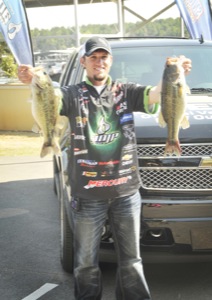 Where Blaylock sets himself apart from most anglers is his selection of his jig. He believes a ball head finesse jig is by far the most suitable jig to skip. Although his Bass X Rockhead jig has become extremely popular among professional anglers, it’s the size of jig that he chooses that makes his presentation unique. “I rarely throw anything lighter than a half ounce. I feel very comfortable with the way the jig was built and believe making more skips is really more important than the rate of fall,” he says.

His choice of jig trailer is ultimately what decides the action imparted on his jig. A bait that has many appendages draws more water and slows down the fall of the bait. Additionally, he finds that the more appendages a bait has the more it will fall away from his target. He makes his trailer decision based on how active the fish are and what type of forage they key on. For post spawn fish he will often choose a bait that has a swimming action because the bass are seeking out bream and are more active then the months prior. During a harsh cold front he will revert back to a more deliberate vertical fall with the use of a small, subtle trailer like the Berkeley chigger craw.

Other refinements he has made over the years include his jig modifications, or lack their of: “I started to use Bass X jigs because I didn’t want to cut down the skirt any more. I want a big bait, if I didn’t I’d switch to a shakey head. The most I do is trimming the skirt down to the hook because I feel the bulk of the skirt helps the bait fall naturally.” Blaylock has also made it certain to have a few different jigs tied on because when skipping a jig fatigue can play a role in your presentation. After several days of practice he sometimes feels his presentation is off and will scale down the size of the jig or trailer in order to maintain his effective skipping technique.

His final words of wisdom include keeping an open mind, “I understand that some bodies of water don’t have docks, but that doesn’t mean skipping a jig won’t be effective. Think of the lay downs, or trees that hang over the water in the same way you would a dock. It’s another location that has similar qualities and if you can skip your jig into the cover, you have made a presentation most will overlook.”