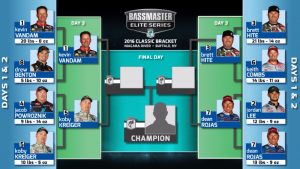 BUFFALO, N.Y. — And then there were four. The first round of the Bassmaster Classic Bracket tournament on the upper Niagara River is over and half the field is driving back home.

The two Elite Series anglers from Arizona are staying though, as Brett Hite dominated and Dean Rojas performed some last-minute heroics during the first round, stamping their tickets to the semifinals.

Michigan’s Kevin VanDam and Koby Kreiger of Florida round out the semifinalists heading into Thursday’s head-to-head clashes in hopes of winning the lion’s share of the $50,000 purse and a berth into the 2017 GEICO Bassmaster Classic presented by GoPro.

The unusual format of this derby has generated a lot of excitement from the anglers and fans watching on Bassmaster.com and WatchESPN, as every second of fishing has been streamed live.

The anglers are also getting updates from BASSTrakk to know how much weight their rival has caught, and officials on each boat immediately weighing and releasing the fish once the information is logged.

“I love this format,” said Rojas, who fished against Alabamian Jordan Lee. “We fished for 5 1/2 hours, and I was losing for all but two minutes of the match. When I caught that last fish, fans got to watch in real time the excitement and incredible circumstance that gave me the win.”

Hite wasn’t sweating a bit. With the second-heaviest limit on Tuesday, he had a 2-pound cushion over Texan Keith Combs, his first round opponent.

“I knew some big ones lived in my spot, and when they bit early, I felt like I was in good shape,” Hite said.

After boating the biggest limit of the event so far (11-2) in the first two hours of competition, Hite was more than 7 pounds ahead of Combs, who ended the day with just 6-12.

“I felt really good with my weight, so I went exploring for the last hour. I found some stuff that should help me tomorrow,” Hite said.

The two anglers are roommates on the Elite Series, and Powroznik vowed to help Kreiger make it to the Classic. Winning this tournament is the Florida pro’s only chance to get there.

Kreiger fished for more than 2 1/2 hours without a bite while Powroznik watched, and even coached, from his boat nearby. Kreiger finally got a bite, and the fish jumped off. With 27 minutes left in competition, Kreiger set the hook and boated a 1-7, enough to finally eclipse Powroznik’s Day 1 total.

“Thank the Lord and thank Jacob Powroznik!” Kreiger said. Powroznik ended the first round with 9-15, and Kreiger moves to the next round with a two-day total of 10-4.

VanDam had nearly a 9-pound lead over Florida pro Drew Benton heading into Wednesday’s elimination match and could have slept through the second session and still won. However, that’s not KVD. He went out and caught 10-4 for a two-day total of 20-8. Benton finished with a final total of 5-10.

“I was watching BASSTrakk and knew Drew was having a tough time, so after I boated one pretty good one, I went practicing,” VanDam said. “Based on what I found, I feel really good about my future in the derby.”

Thursday’s semifinal round on July 21 will pit Rojas vs. Hite and VanDam vs. Kreiger. The weights will go back to zero, and all anglers will fish from 8:30 a.m.-2:30 p.m. ET.

The winner of those two matches will advance to Friday’s championship round. With weights starting from zero again, the anglers will fish head to head from 8:30 a.m.-2:30 p.m. for the title.

Bassmaster LIVE will broadcast coverage of the entire tournament Thursday and Friday, from first cast until the fishing stops, with a camera in every boat.

There was no entry fee for the tournament. The local host for this event is I Love New York.