Bass fishing has changed over the years.  The technology has improved; boats and motors have gotten faster, line has become super, hooks are sharper and electronics are painting a brighter picture than we’ve ever seen before. 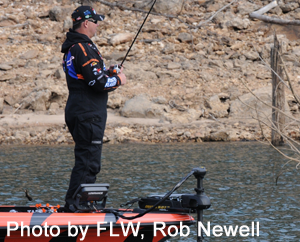 Two other things that have changed are the anglers, and the fisheries.  As the fisheries have evolved, the necessity for an angler to adapt to his surroundings has become vital.  Gone are the days that an angler could go from lake to lake with one type of rod and lure and dominate.

In the 1970’s the Flippin’ technique dominated, in the 80’s the crankbait came into prominence, and as the turn of the “New Millennium” has shown, an angler had better be one thing if he wants to compete; versatile.

In the modern world of bass angling, even those anglers who are known as a specialist have adapted to the times.  Anglers who made a name in shallow water are fishing deep, and those who fished offshore are effective in the shallows.

The angler who learns to adapt to the conditions and the fishery today is one who challenges for Angler of the Year titles.  Anglers who are adept at finding a way to catch fish in a variety of conditions on a multitude of lakes across the country are the ones who have the best chance at winning tournaments.

One of those anglers who has based his career on being versatile is FLW Tour pro Dave Lefebre from Union City, Penn. 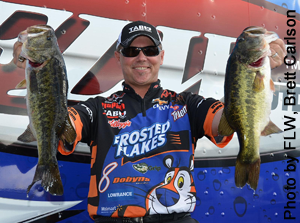 The Early Years
Lefebre began fishing as a youngster, primarily with his father who was a Musky fisherman.  As a result of his upbringing, the young angler had a love for Rapala lures; all kinds.  “I had one of those giant tackle boxes that opened at the middle and had four trays on either side,” Lefebre said.  “That whole thing was full of every shape and color Rapala I could find.”  His first bass was taken on a Rapala lure.

He collected other tackle, but in smaller quantities, and when his prized Rapala collection went missing, it forced him to make a change if he wanted to fish.  “That whole box was stolen from my front yard,” he said.   “Every one of those plugs was gone, and I was heartbroken, but in hindsight, I believe it helped me become a better angler.”

From that point on, Lefebre had to use the other lures he had collected.  With the exception of a couple of Rapala plugs he had tied to his rods, and the occasional plug he received as a present, he had to fish with what he had.

He began reading fishing publications, and it was those publications that helped him learn a love for catching fish in a variety of ways.  “We had three magazines at our house; Fishing Facts, In Fisherman and Bassmaster, and I learned to fish from them,” he said.  “I really started reading those magazines from the tournament reports pages first, because those were the guys catching fish when it meant something, and I wanted to do it like them.”

Fish with a Purpose
Reading magazines began a love affair with catching bass and the desire to compete.  “I’ve never fun fished per se,” Lefebre said.  “Don’t read me wrong, fishing is always fun, but I wanted to learn how to fish better, because from the time I was 10 years old, I was saturated with the thought of being a professional angler.” 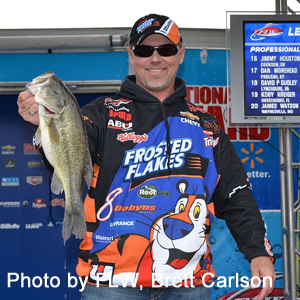 With his desire to be a tournament pro, Lefebre began fishing in earnest.  “I picked up new lures as I could save up the money to buy them, and started learning how to throw them,” he said.  “I picked up the Heddon Moss Boss, crankbaits, spinnerbaits crankbaits, plastics and finally; jigs.”  Ironically if there is one lure that he has become known for his ability to throw, it would be a jig.

As he got older, he began fishing as much as he could around his work schedule, and the gigs that his band played.  “I worked at night, played our sets, then went fishing,” he said.  “I wanted to be as good as I could so that when the time came to compete, I was ready.”

He sought to be as competitive as possible, and to him that meant being able to catch fish anywhere, in any way he could.  “I learned to love catching fish, no matter how I had to fish to catch them,” he said.  “Whether it was fast, slow, on top or on the bottom; I loved doing it.”

He set out to learn techniques and types of waters that would give him an advantage once he branched out.  “We have the ability to fish every type of water way with the exception of tidal near my home,” he said.  “I spent time trying to get comfortable on all of them.”

The results have been exceptional.  In a professional tournament career that began in 2001, Lefebre has amassed 42 top 10 finishes; four wins, eight trips to the Forrest L. Wood Cup, a trip to the Bassmaster Classic, an FLW Series Angler of the Year Title and more than $1.2 million in career earnings. 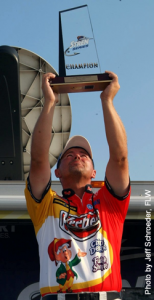 Practice and Tournaments
The work begins at home for the 40-year-old pro.  “I’m a research junkie,” he said.  “I spend as much time as I can on the Internet looking for current conditions and past results; any detail that can help me.” He also spends a lot of time packing; because he carries a tremendous amount of gear.

Lefebre said that an angler needs to be prepared for everything if he wants to capitalize on the conditions.  “I try to be prepared to make adjustments to anything I confronted with,” he said.  “I carry more tackle with me to tournaments than anyone I know.  That doesn’t mean I’ve got it in the boat; it’s in my camper, or in my truck, but if I need something, it’s there.”

If, because of his research, he felt like there was a dark horse pattern that could produce a different caliber of fish; this is when he tries that program; if nothing produces, he goes conventional on the second day.  “Along with my standard lures that I carry in the boat, I pack extra tackle with me on the practice days,” he said.  “I try to play out as many of those hunches as I can on the first day of practice.”

Once he begins to figure out what he will be doing in a tournament, he removes dead weight.  “If I’m not going to use it in an event, I put it back in storage,” he said.  “I still have something for plan b and c in the boat, but I try to run as light as possible.”

1.  Stop fishing what you like – “If you know that you hate catching fish on a wacky rigged Senko, go fish it exclusively,” he said.  “I taught myself to learn to like throwing lures I was inexperienced with, or didn’t like throwing to improve on my results.”

3. Make time to fish – “I worked a night shift, played in a band and fished two tournaments a weekend,” he said.  “If you can only fish on Saturdays, make the most of that time, try one new thing until you feel like you know it.”

4. Keep it Simple – While it may seem counterintuitive to be versatile yet simple, Lefebre said the two are not exclusive.  “Knowing how to throw a lure category doesn’t mean you need every color of the rainbow in each product,” he said.  “If you’re learning the frog, bring a black and white one, carry three jig colors, or two spinnerbait colors and you should have something that will be effective in any situation.” 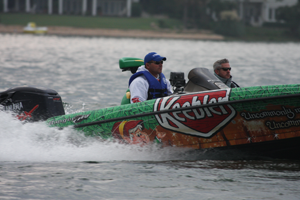 5. – Be open to possibilities, but don’t overlook details – “One of the biggest disadvantages to trying to remain versatile is overlooking the right bite,” he said.  “Try not to overlook the winning program while trying to find something else.  Don’t miss the pattern flipping a jig into shallow cover while you’re chasing topwater fish on schoolies; it’s a delicate balance, but don’t go so fast you overlook the best option.”

There are many examples of anglers who have made versatility their strength.  Being successful today almost demands it, at least, that’s what Lefebre believes; and with his record, it’s hard to argue the point.