Kevin VanDam is a square; a fan of square billed crankbaits, that is.

To be perfectly truthful, the three-time Bassmaster Classic Champion is the definition of a crankbait junkie.  If he can catch quality bass on a crankbait, he’ll be throwing it.  In fact, there are plenty of times when the combination of KVD and crankbaits seem to be the equivalent of 1+1=3, when most people’s total is two. 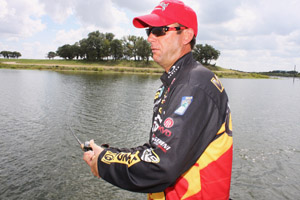 The recent history of Bassmaster television highlights are replete with images of VanDam swinging one crankbait caught bass after another over the gunnels of his Nitro.  The collection of those images has resulted in multiple Elite Series wins, three Toyota Tundra Angler of the Year titles and his third Bassmaster Classic Championship.

His respect for the lipped diving plugs includes the knowledge that hand carved balsa plugs are the origins of the crankbait market segment. VanDam has used the original balsa crankbaits throughout his career and the random, hunting action of the baits led him to always be on the lookout for more of the best.

The nature of the natural material of balsa gave each lure its inherent strengths, but also presented some challenges as well.  “The way trees grow mean different parts of a piece of wood will be denser than others,” said VanDam.  “That nature also means that it has historically been impossible to produce consistent action.”

The best action, according to the Kalamazoo, Mich. pro is one that features a tight wiggle, but also randomly darts around in the retrieve, without losing the ultimate tack of the retrieve.  He tried many lures to find his go to plugs.  “You’d find one in ten or more that had the action I wanted,” he said.  “I would play with those that were close to see if I could make them do what I wanted.  I would shave bills and de-tune the line ties to try and make them do what I wanted. 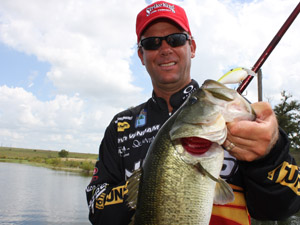 The final disadvantage was durability.  “Once I found a bait that was exactly what I wanted, it would be torn up after a three day tournament,” he said.  “We needed a different alternative that answered all of these problems.”

His answer was to work with is lure sponsor Strike King, and come up with a bait that solved the problem.  The result was the KVD 1.5 and 2.5 Square Bill Crankbaits.  “They are made of plastic and have heavy hardware for durability,” he said.  “They are silent, and we figured out how to make the lure have the action we wanted at every speed.”

When to go Square
VanDam revealed that the bait has become his go to for fishing in the two to six foot depth range, and he particularly likes certain other elements to be present when he chooses to toss it.  “I love it around grass, stumps, rocks and other obstructions,” he said.  “The body is really good about deflecting off of cover, which is one of the things that helps to trigger strikes.”

One of the things he loves about square billed crankbaits are their versatility, and while he has had his best results with them in cover, he said there are times it’s not necessary to have obstructions.  “It really can be a great way to catch fish in clear water,” he said.  “The erratic nature of the bait has done well for me on shallow flats with little cover; I’ve really caught a lot of big smallmouth on them on lakes at home.” 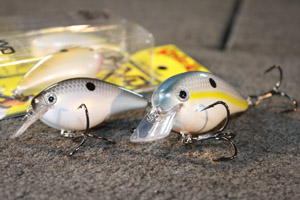 Like any other reaction bait presentation, having some wind to break up the surface of the water is always a positive condition.  “Wind stirs everything up, and makes it easier to trigger strikes,” he said.  “When I have a shallow bank, with a little wind and some cover on it, I’ll be throwing a square bill.”

Square Bill Gear
VanDam is a fan of composite crankbait rods, and he worked with Quantum to develop a series of rods that gave him the benefits of both worlds; the sensitivity of graphite, with the response of glass.  “I want the rod to load well when they strike, but I need to be able to have the responsiveness around cover,” he said.  “A composite cranking rod allows me to absorb the shock of a fish, but still allows me to snap the bait free from grass and obstruction, as well as being light enough to cast all day.

His first choice is a 7’ medium action Quantum TourKVD rod, because it provides him the perfect balance of length and precision, however he does step down to a 6’6 or 6’8” TourKVD if he needs more precise target casting around boat docks and stump fields. 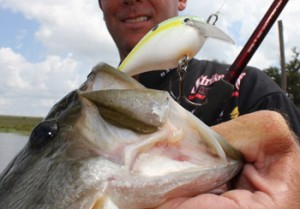 His reel of choice is the Quantum TourKVD 150.  The reel features a 5.3:1 retrieve speed, but a little larger spool size so he still can keep up a healthy pace.  “I want the ability to change throughout a retrieve,” he said.  “I can slow down and power the bait, but can still move it forward at a pretty good clip because the larger spool allows me to bring in a enough line during a turn of the reel handle; it’s the best of both worlds for a cranking reel.”

He is an ardent believer in the properties of fluorocarbon line, believing it to be a major reason for his quantum leap in crankbait efficiency the past several years.  “I can feel everything with fluorocarbon,” he said.  “If there is a sprig of grass on the bait, or the type of bottom changes; I can feel it.” He uses 12 to 20-pound-test Bass Pro Shops XPS Fluorocarbon depending on the conditions; the shallower the water, or heavier the cover prompts a heavier line.

He also suggested anglers consider changing hooks.   “They come with decent hooks, but with the help of Mustad, I came up with a hook that catches more fish on crankbaits,” he said.   The KVD Elite trebles allow me to go to a larger hook, and have a stronger wire size for using fluorocarbon.  The Triple Grip shape of the hook also holds on to them better than round bend trebles when I get them hooked.”

Making a Choice
He revealed that his first choice is usually the smaller of the two sizes.  “The 1.5 is really my money bait for catching numbers of quality bass,” he said.  “I use it most of the time, and especially when the bass are receiving a lot of pressure.  The larger size is what I throw when I’m around bigger fish, and I want to give them a larger profile.” 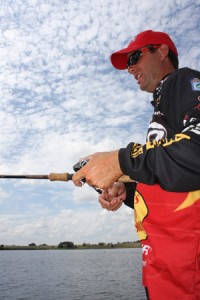 The other consideration is water clarity.  If he finds that the water has some color to it, the 2.5 is best, but the 1.5 is his primary choice in clearer water, and it may change during an event.  He said one example of that was the second tournament of the 2010 Bassmaster Elite Series Postseason on the Alabama River.

“The water was high and really stained on the first day of that event, and the 2.5 produced most of my fish; including my two big ones,” he said.  “I went to the same spot the next day and the water had dropped and cleared, so I switched up to the 1.5, and was still able to make them bite.”

Colors?
It should be no surprise to many that VanDam loves the Sexy Shad color bait.  He said that it s the most natural looking shad pattern he has found to date in a variety of water colors.  However, his first consideration is let water clarity dictate which color pattern he will chooses.  His secondary criterion is forage base.

“If the water is dirty, I’ll choose a Chartreuse Sexy Shad, or I may have to go to the Black Back Chartreuse if it’s really dirty,” he said.  “If the water is really clear then a Sexy Ghost Minnow is a great choice.  Most of the time, for most water conditions though, I start with Sexy Shad; it seems to be a great all around pattern.

He does have some regional and seasonal patterns that he chooses however.  If he is in the Carolinas or in Georgia, a Sexy Blue Back Herring is a favorite, and he favors the Orange Belly Craw for springtime, and a bluegill color in the postspawn through the summer.

Take it from a champion, and if you haven’t done it before try a new style of fishing with these baits, and like KVD, you too could be a square.

Final Suggestions
He offered a couple of tips for anglers to maximize their fishing with square bill crankbaits.  “Use your rod tip to control your bait,” he said.  “If you want the bait to run to its maximum depth, hold the tip down, but if you’re in shallow water, holding the rod tip up high will help anglers keep the lure from digging too deep.”

He said to throw it more places than anglers might think they should.  “Square bills do a great job in cover,” he said.  “Bounce them off rocks, docks grass and stumps, they’ll come through most of the time, and these actions are great triggering mechanisms.”

For all your Square Bill Fishing needs check out MonsterFishingTackle.com