Pete Ponds may be one of the most unconventional anglers out there. He is so much the fan of fishing that he lists one of his favorite times to go fishing as, “now.” Of course, that means any time that he can go fishing, but in this case, it also means that he enjoys fishing in the cold weather months. 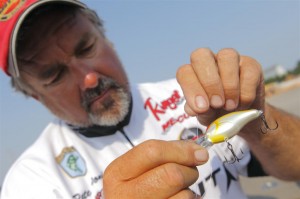 His reasoning is not because he can experience wide open bites; fishing in the wintertime months can be notoriously slow. But, because of the cooler conditions and the slower fishing, he has experienced some of the more serene days of his fishing career.

“There are no jet skis, water skiers and quite frankly, there are fewer anglers out there,” he said. “That leaves me alone on the lake with nothing but my thoughts and the fish.” While he enjoys the peace and serenity it provides him, that does not mean that there aren’t fish to be caught. Ponds has figured out a way to catch bass routinely in the colder months, and keep moving while he does it.

“A lot of anglers think of the wintertime as the time to slow down and fish finesse rigs,” Pond explained. “But, this is a time that I get to fish two of my favorite ways. Slow cranking and jerkbaits are my favorites this time of the year.”

Reaction Baits, Now?
When the image of crankbaits and jerkbaits come to mind with most anglers, they picture burning down a bank with the trolling motor on high bypass, furiously casting and retrieving. They picture the crankbait skittering past the bass, and a jerkbait aggressively slashing side to side. However, Ponds said that is not the case this time of the year.

“Anglers need to consider that they are going to have to slow down regardless of the presentation they are using this time of the year,” said Ponds. “I just like to slow down, and keep moving.” By doing that, he has developed a system that produces one or two bites an hour, and gives him a chance to put big bites in the boat. 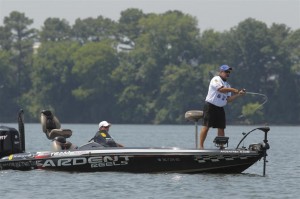 Go Slow with the Flow
Because bass get cold, Ponds said that he resorts to slowly cranking a tight wiggling crankbait, such as the Bandit Lures Flat Maxx, and he turns to subtly retrieving a jerkbait. “This is not the time to burn a crank or wildly slap a jerkbait around,” he said. “This is a time to slowly grind the crankbait and take long pauses between little pops on a jerkbait.”

So committed to the slow and go with the flow process this time of the year that he also espouses taking the leisurely approach to getting on the water. “I recommend sleeping in, enjoying a nice breakfast and getting to the water about noon,” he said. “The best time to fish this time of the year is the afternoon, especially on sunny days, so don’t get in a hurry at all.”

Focus on the Hard Stuff
Ponds said that he specifically targets rip rap banks or rocky points this time of the year, and he prefers them to be on the northeast sides of the lake. “These are the banks that get the most sun throughout the day,” he said. “So, if they have the rocky structure I’m looking for, then they tend to hold the heat better than other banks.”

He also said that he likes to find those types of banks that have additional features that separate them from the surrounding banks. He said that he looks for laydown logs, stumps or irregular features in the rocks themselves. His experience tells him that those are the best fish holding locations.
Once he has found the surroundings he likes, then he begins casting. 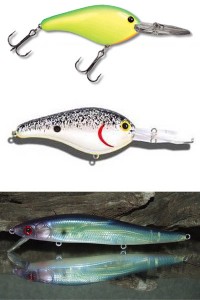 Baits and Gear
Ponds choice of the Flat Maxx Deep is made because he said it is a lure that will reach the eight or nine foot range, but does so with a very tight wiggle. “that really tight wiggle is important to me in cold water,” he said. “I seem to get more strikes on it, as opposed to a wide wobbling bait.”

He also selects the Talon jerkbait for a specific reason. For him, it matches exactly the kind of color he likes in a lure. “Talon purchases the blanks and paints them exactly as I want them,” he said. “It gives me a lot of confidence to throw exactly the colors I want to throw.”

That being said, he believes that a naturally colored, subtle paint job is key to his success this time of the year. “I like Pearl and Pearl Splatterback, Pearl Black Back type colors in the Flat Maxx,” he said. I really like my MB Table Rock Shad paintjob in the jerkbait because it is translucent with just the right hints of color for the cold water.”

He throws both lures on his signature 7’1″ medium action Duckett Fishing White Ice rod, and Ardent Edge Elite reel with the 6.5:1 retrieve speed. He spools the reel with 8 to 14-pound-test Vicious Pro Elite Fluorocarbon line for the crankbait, depending on the depth he needs it to run, and he goes solely with the 8-pound-test on the jerkbait for maximum depth.

Retrieve
To set up his retrieve, Ponds said that he positions the boat parallel to the rip rap or rocky bank for three reasons. The first being that he can take advantage of the bass’ desire for the warmth. Second, he can see all of the subtle differences in the bank that he wouldn’t see if he was fishing at a 90-degree angle. Finally, he can keep the lure in the strike zone longer by casting along the bank.

Ponds said that with either bait, slow is the key. He prefers to keep a slow, steady grind going with the crankbait; even when he bumps cover. “I don’t stop and go this time of the year with a crankbait, I’ve just had too much success with the steady grind,” he said. “I let the lure contacting the structure make its unique movements.” 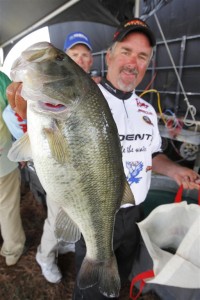 The jerkbait is also subtle, relying on the pause between each twitch to draw the fish in for a strike. “I said twitch on purpose, because you don’t want to overwhelm the lure with hard jerks this time of the year,” he said. “Then, I count my pauses with 1-1000, 2-1000, 3-1000, until I find out how long to pause the lure for that day.

I may not catch 30 bass doing these things on a cold wintery day, but I can certainly put a good solid limit in the boat, and have a chance at a big one occasionally.”